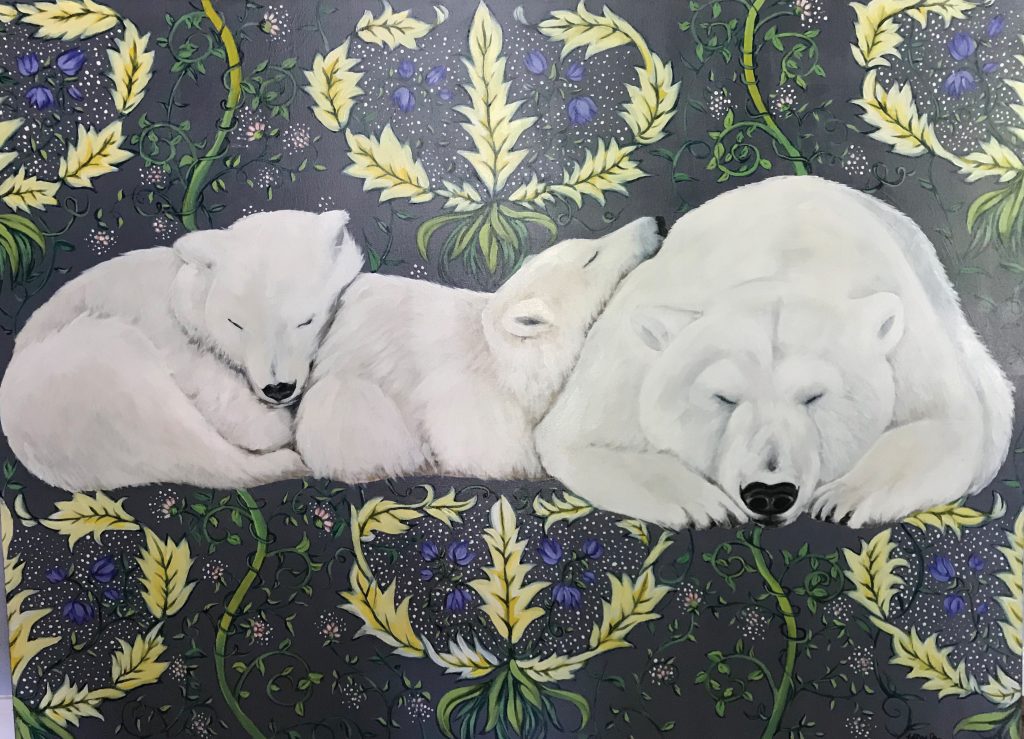 Naomi Jones’ art reflects a contemporary historic take on portraiture, though the subjects are animals and not humans. Classic repetitive floral motif backgrounds, reminiscent of the Arts and Crafts movement and William Morris’s wall patterns, suspend her subjects, making them vulnerable while they continue to hold their ground.

This is creativity straight from the heart. It protects the defenseless while showing their value and strength, bringing them out of the shadows and on our walls.

For a while Naomi worked with her husband, running a drawer pull and home accessories trading business. After the birth of her third child, she nurtured her home and family full time and put her art on hold. When her children were grown, she began working again as an art teacher.

“[Teaching] got me back in touch with making art, which was really nice, like just making art for art’s sake,” she says.

In being around so many children, she realized she was surrounded by exposed people.

“It piqued my awareness on that subject,” she says. “I became very empathetic, almost empathetic to the point of where it makes you ache. In a lot of ways, the painting came out of that.”

She was a photographer in art school, but after college she realized she didn’t want to do that.

“I’ve always loved painting, the act of painting,” she says. “It’s very satisfying, and it makes me feel that I’m where I should be and what I want to be doing.”

While no longer a photographer, her works are painted from photographs and set up in the style of photographic portraiture. The subject seems aware that it’s being photographed andappears startled, as if caught by the camera’s lens, yet wild and untamed in the artificial background habitat.

“I’m not trying to do an animal in its environment. I’m painting the animal as if it were an individual being painted,” she says.

Naomi started painting animals because she felt for them. At her home in Greensboro, she would see many rabbits and deer in her backyard.

“I’ve just become so emotionally attached to creatures; I have an affinity for vulnerable ones,”she says.

She took these sympathetic and unprotected

creatures and elevated them, channeling her emotional need to protect and preserve.

“That was definitely in my thinking with the

polar bears,” she says. “Because I was and had been so disturbed about what was happening

to their world. They’re going to become extinct.”

The polar bears provided a fun challenge for the artist.

“It was a nice opportunity to paint so many different whites in the polar bear fur,” she says. “As a painter I find that very exciting. The contrast, and that you also have to get all the spacing of their features correct.”

From polar bears she moved on to rabbits, “because they’re sort of at the bottom of the food chain.”

“I just feel that they’re so incredibly vulnerable,” she says. “And you know, being a woman, I can relate. Because sometimes you feel like prey. I think that’s why I picked them.”

When you experience susceptibility, you can appreciate the softness and relief when you can share it. But that doesn’t happen in general conversations, or in business. To see it in a painting as a subtle reflection of a reserved aspect of self is an opportunity to appreciate and experience that emotion directly, uninhibited.

After rabbits, she began painting foxes.

“Even though they’re hunters, they’re also extremely at risk because they’re so hated, they’re looked at as vermin,” she says. “But they’re also so gorgeous, and so incredibly beautiful.”

Naomi became more interested in foxes while developing an online relationship with a group in England that rescues them.

“I would get all these images of young foxes who had been caught in traps and were being rehabilitated,” she says. “The current series was something that developed.”

Her paintings started out as portraits with solid background colors.

“I didn’t know what to do with the background,” she says.

As we are all influenced by what we see and like, her backgrounds changed from plain color to decorative floral patterns, influenced by William Morris’s wallpaper patterns.

When viewers step up close to her paintings, they see the carefully applied strokes and the realism the animals she portrays come alive.Animals speak to us when we encounter them. They touch us as they share their lessons of strength and courage, gentleness and fertility, nurturing and protection.

“Becoming a mother was the biggest change in my life,” she says. “I went from looking outwards constantly to looking very close by. And you gain a second sight, because you’re seeing through someone else’s eyes.”

She stresses the importance of how our actions affect people around us.

“You’re influencing so many more lives, defenseless people and creatures down the food chain, by every action you take,” she says. “You have to think of how it’s being received. You might think it’s funny to make loud noises, but you may be frightening your baby or dog, and they’re hearing it for the first time. It’s being received and you have to be responsible for that.”

One of the nicest moments she’s had as an artist happened during an exhibition in Wilmington.

“A couple came in, they were on their honeymoon, and they bought one of the paintings right in front of me,” she says. “They didn’t know I was there. But they bought the painting as a wedding present for themselves. And it was just so sweet.”

They were holding hands, and holding the painting on the way out as if it were a child, affecting them positively for years to come.