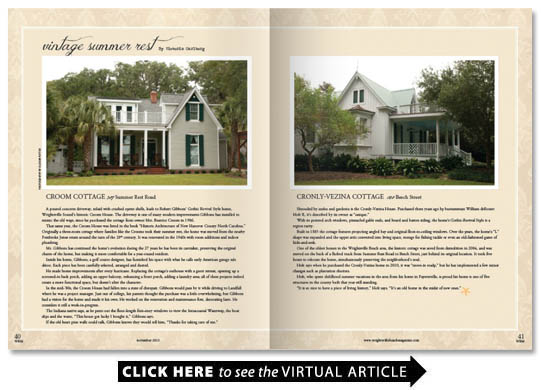 A poured concrete driveway inlaid with crushed oyster shells leads to Robert Gibbons Gothic Revival Style home Wrightsville Sounds historic Croom House. The driveway is one of many modern improvements Gibbons has installed to mimic the old ways since he purchased the cottage from owner Mrs. Beatrice Croom in 1986.

That same year the Croom House was listed in the book Historic Architecture of New Hanover County North Carolina. Originally a three-room cottage where families like the Crooms took their summer rest the home was moved from the nearby Pembroke Jones estate around the turn of the 20th century. It was renovated in the 1940s with room additions and indoor plumbing.

Mr. Gibbons has continued the homes evolution during the 27 years he has been its caretaker preserving the original charm of the home but making it more comfortable for a year-round resident.

Inside his home Gibbons a golf course designer has furnished his space with what he calls early American garage sale d?cor. Each piece has been carefully selected arranged and dusted.

He made home improvements after every hurricane. Replacing the cottages outhouse with a guest retreat opening up a screened-in back porch adding an upper balcony enhancing a front porch adding a laundry area; all of these projects indeed create a more functional space but doesnt alter the character.

In the mid-80s the Croom House had fallen into a state of disrepair. Gibbons would pass by it while driving to Landfall where he was a project manager. Just out of college his parents thought the purchase was a little overwhelming but Gibbons had a vision for the home and made it his own. He worked on the renovation and maintenance first decorating later. He considers it still a work-in-progress.

The Indiana native says as he peers out the floor-length first-story windows to view the Intracoastal Waterway the boat slips and the water This house got lucky I bought it Gibbons says.

If the old heart pine walls could talk Gibbons knows they would tell him Thanks for taking care of me.

Shrouded by azalea and gardenia is the Cronly-Vezina House. Purchased three years ago by businessman William deRosset Holt II its described by its owner as unique.

With its pointed arch windows pinnacled gable ends and board and batten siding the homes Gothic-Revival Style is a region rarity.

Built in 1885 the cottage features projecting angled bay and original floor-to-ceiling windows. Over the years the homes L shape was expanded and the upper attic converted into living space storage for fishing tackle or even an old-fashioned game of hide-and-seek.

One of the oldest homes in the Wrightsville Beach area the historic cottage was saved from demolition in 2004 and was moved on the back of a flatbed truck from Summer Rest Road to Beech Street just behind its original location. It took five hours to relocate the home simultaneously preserving the neighborhoods soul.

Holt says when he purchased the Cronly-Vezina home in 2010 it was move-in ready but he has implemented a few minor changes such as plantation shutters.

Holt who spent childhood summer vacations in the area from his home in Fayetteville is proud his home is one of five structures in the county built that year still standing.

It is so nice to have a piece of living history Holt says. Its an old home in the midst of new ones.