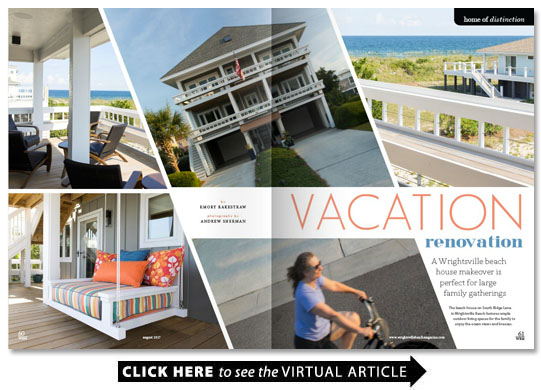 Cindy Morrison had just completed a total renovation on her California home when she thought why not keep the momentum going?

The next project she had in mind was her parents’ East Coast beach house located on South Ridge Lane at the northern end of Wrightsville Beach.

Morrison’s family moved from New Jersey to Greensboro North Carolina 30 years ago and soon began looking for a vacation home on the coast. She suggested Wrightsville.

“I had heard of Wrightsville Beach because friends from work had been coming here for years ” Morrison says.

Her parents first purchased a condominium at Cordgrass Bay. In 1997 Morrison’s father worked with Randy Williams of Hardee Hunt & Williams Real Estate to purchase the South Ridge home then about 15 years old.

The house became a spring and summer respite for Morrison and her four siblings the place where the far-flung family came from near and far — from Greensboro California and Chicago — to gather with friends for vacations and reunions.

“The pattern has been almost every holiday starting with Easter I’m here and some amount of my family is here. Then my siblings all have access for at least a week a year for their vacations as well as friends and extended in-laws ” she says.

Now Morrison was ready for a thorough update.

“There was never a question of leaving Wrightsville Beach it was a question of when to renovate or do a complete makeover ” she says.

Working with four stories and the house’s decent bones Morrison wanted to open the space restructuring it out of the ’80s style and into contemporary roots where functionality met a breezy floor plan.

Morrison knew she wanted to work with architect and general contractor Bryan Humphrey of Bryan Humphrey Design and Construction but first had to find him.

“Five to six years ago I read a story in Wrightsville Beach Magazine on the house that Bryan renovated two streets behind me on Cowrie Lane ” she says. “Not only did I like the interior and exterior there was a quote in that article something to the effect of ‘It was really great to work with an architect who was also general contractor.’ It was a combo of seeing the work and reading that quote. I thought ‘Wouldn’t that be a pleasure.'”

While Morrison remembered the story about the architect who was also the general contractor she didn’t remember the name. With a bit of investigating and tracing back through old issues Morrison and her sister found the story featuring Humphrey. She called him that day to hire him for the project.

An added bonus was receiving a package deal of sorts with designer Susan Covington.

“Having worked with Bryan that’s how I met Susan and she’s been a godsend the brain and fantastic project manager with a beautiful eye who is really good at listening and reflecting back what I like ” Morrison says.

The one word that reflects the entire project is functionality. After many years of vacationing at Wrightsville Beach Morrison had an idea of what did and did not work in a beach house.

“We had years of experience having family friends and siblings using it ” she says. “When we were redoing the house we thought of things that we’d want to do to make accommodating big groups better and more efficient.”

The first major project that impacted both the upper level sleeping space and main level was removal of the fireplace and chimney.

The upstairs felt more like a dormitory than an escape. Morrison and Humphrey decided to open up the space by adding a dormer with love seat TV area and chairs to create a hangout zone. The addition of queen trundles paralleled modern-day upgrades like USB chargers in bedside walls.

Morrison and Humphrey agreed easily accessible storage was important including in an upstairs space mostly used by teenagers to prevent the usual vacation messiness.

“Usually people just open their suitcase and let it spill on the floor ” he says.

Humphrey added his own touches including galvanized wall hooks and rods for wet swimsuits and towels as well as storage cubbies including space for luggage. The youngest guests now have their own retreat that maintains the home’s functionality and clean lines accented with bed linens in yellow and blue neutral painted walls and abundant natural light from multiple skylights.

“I would say from a transformative perspective the upper floor will be so much more inviting ” Morrison says. “Every cubby and bed is more private. It will still be that sleeping loft feel but I think it will be much more inviting for people to sleep up there and keep it neat and tidy. When we fill up the space it will really be much more appreciated than it was.”

The central living space is one flight of stairs down from the loft. It became the most complex part of the renovation as it housed the kitchen dining room and TV area. There were certain parts of the original floor plan Morrison wanted to keep.

“What we always liked about the house was you could have a group watching TV and yet you could be in what used to be the game room (now dining room) and it didn’t really bother the other group. Everyone was fine but together ” Morrison says. “I think now Bryan’s design has helped us achieve the same thing.”

The first major structural change came with removing three uneven ceilings heights that Humphrey describes as making one room feel like seven. For the kitchen the clunky bar area was removed and replaced with something sleeker and more contemporary. The new space was designed to allow the extended family to eat meals together with a seat for everyone in the elongated space.

“We wanted to make the kitchen as big as we could ” Humphrey says. “We added the bar space to separate the eating space from the kitchen as well as banquette seating.”

Humphrey and his team built all the kitchen cabinetry and most of the furniture. They transformed laminate countertops dated wood cabinetry and fluorescent lighting into a marble backsplash and island with clean white cabinets stainless steel appliances and unique features such as a vertical light fixture above the island.

The central fireplace that blocked the ocean view came down. The TV and game area remain cozy yet functional a place for the entire family to relax as one.

While Morrison chose more of a cottage style for her California home she knew she wanted the Wrightsville house to be contemporary. Covington designed the color scheme around neutral colors in gray and white with accents of blue. An area rug defines the seating area with soft touches to the modern aesthetic while reeling in the geometric vibe created by the room’s furniture.

Downstairs the floor plan remained the same with four bedrooms including the master which Morrison designed with her father in mind. Raised platform beds appear to float above the ground giving the impression of more space.

A beach getaway needs outdoor living spaces so Humphrey transformed an area previously occupied by air conditioning units into a breezy below-deck space. Hours spent at the ocean were anticipated with an outdoor shower to wash off sand and salt and an outside stairway giving wet guests direct access to bedrooms.

“For me [the design] is a great example of Bryan coming back and saying for these reasons it’s impractical and impossible because you have to have a landing etc. But here’s what we can do instead ” Morrison says. “Bryan always provided options not what I asked for but solutions that satisfied more than what I wanted.”

While her California renovation spanned a total of 24 months the Wrightsville house was transformed in a little under eight just in time for the family to enjoy summer vacation season.

“I was really pleased with how it turned out ” Morrison says. “I just love it. I’m very happy with it.”