BY Meghan Barnes and Marimar McNaughton 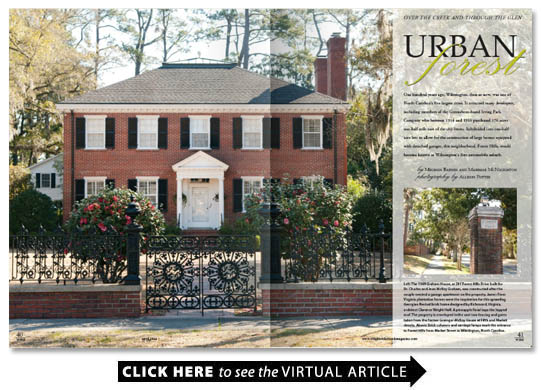 One hundred years ago Wilmington then as now was one of North Carolinas five largest cities. It attracted many developers including members of the Greensboro-based Irving Park Company who between 1914 and 1916 purchased 176 acres one-half mile east of the city limits. Subdivided into one-half acre lots to allow for the construction of large homes equipped with detached garages this neighborhood Forest Hills would become known as Wilmingtons first automobile suburb.

During the first decade of the 20th century Wilmingtons urban sprawl supported by streetcar lines had grown from the east bank of the Cape Fear River as far as 17th Street.

People needed to get away from the crowded downtowns and wanted to have their own property says George Edwards executive director of Historic Wilmington Foundation. People were hankering for a larger house greater yards and a sort of statement that they have achieved a certain amount of success.

The companys first model home at 314 Forest Hills Drive built in the Dutch Colonial Revival architectural style is easily recognized by its gambrel or barn-shaped roof.

The Dutch Revival style is a prevalent style in the streetcar neighborhoods Edwards says. I think that defines the neighborhood.

On the first day of the models open house in March 1926 the house was mobbed. TheWilmington Star reported an estimated 1 000 people visited the home in the span of seven hours including its buyer Charles Fore a dry goods merchant.

From his office in the caretakers cottage at the National Cemetery in the 20th block of Market Street inside a federally built and owned Dutch Revival home Edwards is entrenched in the citys Historic Overlay District. Bordering the Streetcar District along with Forest Hills all three districts are designated by the National Trust for Historic Preservation.

They thought that by looking back and taking some of these architectural styles from the 19th century and bringing those forward with a modern twist that they would capitalize on this sense of Americanism Edwards says.

Other home designs embraced the Cape Cod style rooted in British country cottage idioms that eventually eclipsed the Arts and Crafts style bungalow of Wilmingtons streetcar era and the more formal Tudor Revival homes that were built in Forest Hills until the 1990s.

When the seasonal tours resume in April they will lead groups of visitors through the neighborhood using printed reference materials compiled by the University of North Carolina Wilmingtons Department of Public History for the Historic Wilmington Foundations walking tour of Forest Hills which state:

The ideas for the development of a neighborhood like Forest Hills sprung from the fervor of national pride following Americas centennial celebration in 1876. The residents of the Wilmington community reacting to what they saw as the breakdown of traditional American values in the early half of the 20th century sought to hearken back to their forefathers values with homes that expressed a connection to the wealthy builders of Georgian and Federal styles houses of the late 18th and early 19th century.

All these elements were digested by architects developers builders and clients for use in the new suburban subdivisions that began to grow after World War I Turberg says.

Tudor Revival style homes feature gable roof lines brick and masonry exteriors and decorative half timbering. One of the earliest at 317 Forest Hills Drive was built in 1933 for Charles and Hannah Block. Charles Block co-owned the Block Shirt Factory. His wife Hannah Block was an important civic leader who among other things would lead the city of Wilmingtons historic district revitalization in the 1960s.

The Tudor Revival was brought over by English settlers in the 18th century Edwards says. It passed out of style in the 19th century but came back during the revival period. It speaks to our English roots — the pitched and gable roofs projected gabled entryways and exterior chimneys — speak to our original ancestry.

The traditional styles of Forest Hills homes were blended with new building methods. The use of clinker bricks is one example. Heavier than regular bricks because they were fired at higher temperatures resulting in a darker color clinker bricks — so named for the sound they made when clapped together — became popular with architects at the turn of 20th century and were frequently used in Arts and Crafts style homes. Clinker bricks were used as accent bricks; these larger misshapen bricks added a roughness and texture to the exterior of the 1939 Dr. Louis and Inez Newsome Fonvielle House a Norman-style home at 422 Forest Hills Drive.

Post World War II influences saw another trend emerge in Forest Hills. Because conventional building materials were restricted for government use families that purchased property frequently built a garage with a second story apartment at the far end of their lot to live in until the war was over then built a main house. At 115 Colonial Drive however James McCumber a Jackson and Bell Printing Company salesman and his family never built the main house planned for their property and lived instead in the 1948 garage apartment. The McCumber family still owns the property today.

With a smattering of duplex split-level and ranch homes Forest Hills represents American ideals from the mid-1920s until the mid-1990s. In its second phase well-known architects articulated the pure aesthetic of higher end homes seen along Forest Hills Drive between the intersection of Colonial Drive and Wrightsville Avenue. Owners of these landmark homes were car dealers insurance agents bankers real estate developers and doctors.

Wilmington and the surrounding area has so much architectural variety that one can spend countless hours walking or driving and pick out major and minor design details that make this line of history so fascinating Turberg explains. In a time when the city is still changing yearly its nice to see a part of Wilmington that has managed to stay untouched throughout the years.

For more information on the Forest Hills Walking tour or on Forest Hills itself please visit The Historic Wilmington Foundations website http://www.historicwilmington.org/