Laughter is such good medicine 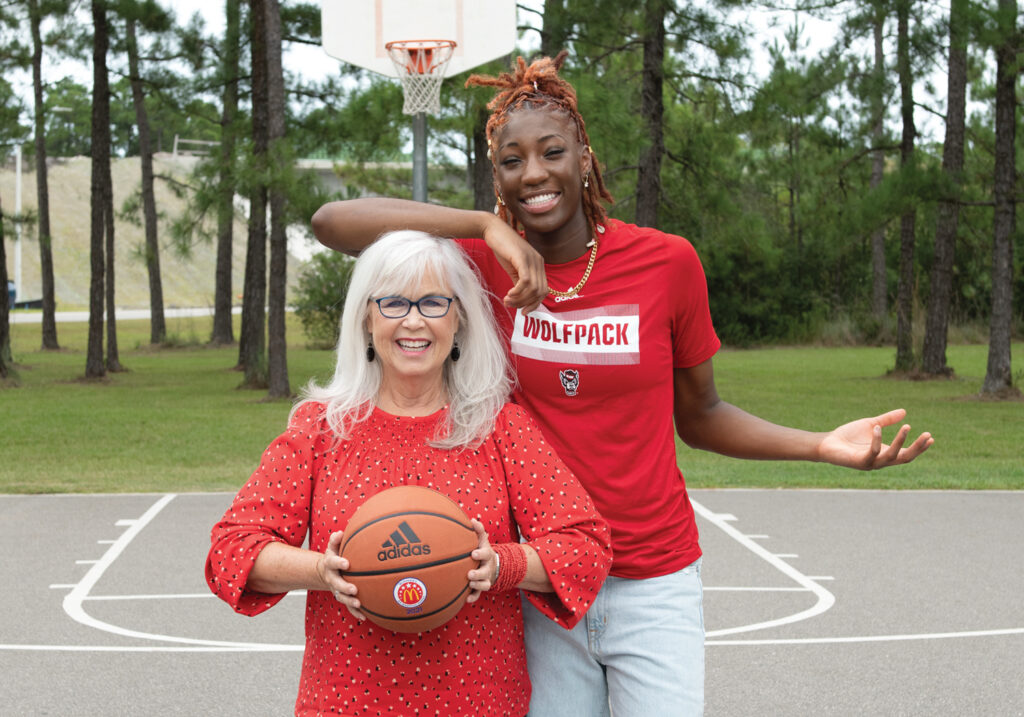 Pat and Saniya Rivers on the basketball court at Ogden Park. Pat’s hair is by Frank Potter, styled by Mason Chandler, make up styled by Ken Grimsley, all of Bangz Hair Salon. Photo by Allison Potter

One of the many benefits to this job is that we can share the accomplishments of those from our community when they make it big. It is even more fun when they are young people.

I had the privilege of spending time last month with Ashley High basketball phenom Saniya (Niya) Rivers and her mom Dee Dee. Art Director Shawn Best and I chose the shot of Niya practicing at NC State as our cover and there was a great deal of laughter as Allison Potter captured this photo of Niya and me.

Every now and then we plan a story for our readers and then it is delayed. Such was the case with our idea of updating you several issues ago on the return of Rivers to her home state to play basketball. We were not thinking, “Okay she went with the Wolfpack at NC State, let’s in the same issue have a story on the reintroduction of the red wolf in eastern North Carolina,” but as you will read, that’s what we have.

Continuing our wildlife theme, we have an informative piece by veteran writer Robert Rehder on the increase in the black bear population and things you should know about black bears. Living in the Grandfather Mountain area for 18 years, I was crazy about Mildred the Bear and her human family, but now the only black bears I want to see are ones in photographs.

Not so migrating birds. Come along and learn about a Motus tower installed on Lea Island (there is also one on Masonboro) so anyone can see in real time, via an Audubon app, which birds are arriving to those uninhabited barrier islands on their migrations.

Along with this we have some absolutely stunning outdoor spaces that will make you consider upgrades to whatever you have already.

Prior to the founding of this magazine, I had the privilege of helping a couple on East Oxford Street sell and empty their beach cottage. Dr. Frank Hall and his wife, Adelaide, had summered there for eons. With his passing, she retreated to their Chestnut Street house. When she passed, I had the privilege of helping empty that house too and sell it to one of the neighbors. In the process, I fell in love with the family. I even came home with some of the things their sons had allocated to the discard pile, including two of Adelaide’s (now) antique umbrellas; and I treasure them. I have a couple of his books that they didn’t want in the Frank Hall collection at UNCW. Dr. Hall was the minister of the Presbyterian Church on Market Street and we have the story of its sale and repurposing. It is thrilling to see the creative adaptive use of a historic property, rather than seeing it razed and apartments put up in its place.

Another month, another piece honoring a hero of our community. We’ve been in awe of architect Michael Kersting as long as we’ve been in business. We did a great deal together over the years. At his memorial service in September, I learned Michael had been an intern of renowned architect Ligon Flynn, and his master’s was from NC State.

His houses are splendid works of art and he will be greatly, greatly missed.