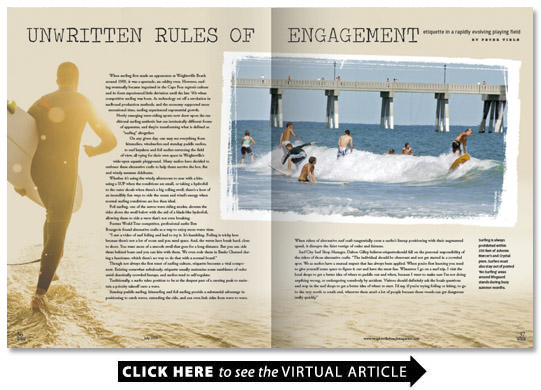 When surfing first made an appearance at Wrightsville Beach around 1909 it was a spectacle an oddity even. However surfing eventually became ingrained in the Cape Fear region’s culture and its form experienced little deviation until the late ’60s when competitive surfing was born. As technology set off a revolution in surfboard production methods and the economy supported more recreational time surfing experienced exponential growth.

Newly emerging wave-riding sports now draw upon the traditional surfing aesthetic but use intrinsically different forms of apparatus and they’re transforming what is defined as “surfing” altogether.

On any given day one may see everything from kitesurfers windsurfers and standup paddle surfers to surf kayakers and foil surfers traversing the field of view all vying for their own space in Wrightsville’s wide-open aquatic playground. Many surfers have decided to embrace these alternative crafts to help them survive the hot flat and windy summer doldrums.

Whether it’s using the windy afternoons to soar with a kite using a SUP when the conditions are small or taking a hydrofoil to the outer shoals when there’s a big rolling swell there’s a host of an incredibly fun ways to ride the ocean and wind’s energy when normal surfing conditions are less than ideal.

Foil surfing one of the newer wave riding modes elevates the rider above the swell below with the aid of a blade-like hydrofoil allowing them to ride a wave that’s not even breaking.

“I saw a video of surf foiling and had to try it. It’s humbling. Foiling is tricky here because there’s not a lot of room and you need space. And the waves here break hard close to shore. You want more of a smooth swell that goes for a long distance. But you can ride them behind boats and you can kite with them. We even rode them in Banks Channel during a hurricane which there’s no way to do that with a normal board.”

Though not always the first tenet of surfing culture etiquette becomes a vital component. Existing somewhat nebulously etiquette usually maintains some semblance of order amid chaotically crowded lineups and surfers tend to self-regulate.

Traditionally a surfer takes position to be at the deepest part of a cresting peak to maintain a priority takeoff onto a wave.

Standup paddle surfing kitesurfing and foil surfing provide a substantial advantage in positioning to catch waves extending the ride and can even link rides from wave to wave. When riders of alternative surf craft tangentially cross a surfer’s lineup positioning with their augmented speed it disrupts the faint vestige of order and fairness.

Surf City Surf Shop Manager Dalton Gilley believes etiquette should fall on the personal responsibility of the riders of those alternative crafts. “The individual should be observant and not get started in a crowded spot. We as surfers have a mutual respect that has always been applied. When you’re first learning you need to give yourself some space to figure it out and have the most fun. Whenever I go on a surf trip I visit the local shops to get a better idea of where to paddle out and when because I want to make sure I’m not doing anything wrong or endangering somebody by accident. Visitors should definitely ask the locals questions and stop in the surf shops to get a better idea of where to start. I’d say if you’re trying foiling or kiting to go to the very north or south end wherever there aren’t a lot of people because those vessels can get dangerous really quickly.”

For newcomers to any of these alternative wave-riding sports the nuances of etiquette can be a confusing paradigm to navigate. It becomes exponentially challenging when multiple styles of craft converge and travel at different rates of speed through the lineup from different angles.

“It baffles me that anyone would go foil surfing in a surf spot. You cover so much ground. If there are people around it’s just not fun. You want as much space as possible to have fun. It’s super dangerous doing it on your own in the middle of nowhere let alone in a crowded spot ” Bourgeois says regarding safety.

“And with kitesurfing you can go wherever you want away from people to your own spot and that’s kind of the idea. It’s usually really poor conditions but conditions can line up where it’s possible to do both but I don’t like it when people are kitesurfing right near where I’m surfing. As long as you’re kitesurfing downwind from someone it’s fine because if you crash your kite it goes downwind with the current away from people in the water. Everyone out there is trying to have fun and foil surfing and kiteboarding are just an extension of surfing. Since my background is from surf I try to stick with surfing rules.”

While there are surf zones allocated in the peak summer months that all surf craft are required to adhere to there is no formal governance of the unwritten code of etiquette in the water and mishaps can and do occur.

It only takes one incident to open the door to litigation or for government ordinances to start restricting aquatic liberties.

“The kitesurfing community meets with the lifeguards every year to discuss safety and rules — everyone wants to be safe. But it’s a tourist town and they come to have a good time but they may not know where to go or the rules. If you want to get into it you should just go up and talk to the guys that are on the beach setting up or to one of the surf shops — everyone is super friendly. It’s important to look out for one another have conversations in a polite and respectful way if you do see a beginner struggling. But it’s also the personal responsibility of the rider to be aware of their surroundings ” Bourgeois says

The locals are among some of the most gracious of any surf town — and the most forgiving. Ingratiating oneself into the lineup of warm locals goes a long way no matter what surf craft one might be riding. And however much of a spectacle or odd some of these modern modalities of surfing might first appear it’s clear that they’re only continuing to evolve. As the old adage states “the only constant is change.”