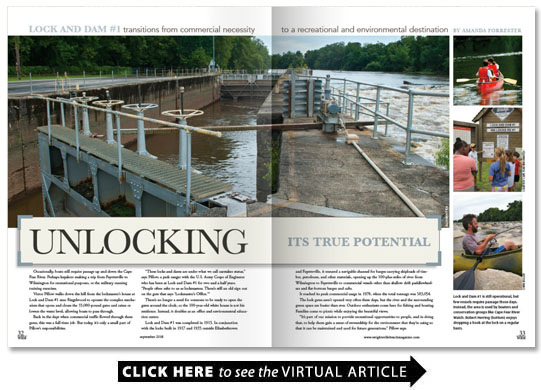 Occasionally boats still require passage up and down the Cape Fear River. Perhaps kayakers making a trip from Fayetteville to Wilmington for recreational purposes or the military running training exercises.

Victor Pillow walks down the hill from the lockmaster’s house at Lock and Dam #1 near Riegelwood to operate the complex mechanism that opens and closes the 55 000-pound gates and raises or lowers the water level allowing boats to pass through.

Back in the days when commercial traffic flowed through these gates this was a full-time job. But today it’s only a small part of Pillow’s responsibilities.

“These locks and dams are under what we call caretaker status ” says Pillow a park ranger with the U.S. Army Corps of Engineers who has been at Lock and Dam #1 for two and a half years. “People often refer to us as lockmasters. There’s still an old sign out on the gate that says ‘Lockmaster’s Office.'”

There’s no longer a need for someone to be ready to open the gates around the clock so the 100-year-old white house is not his residence. Instead it doubles as an office and environmental education center.

Lock and Dam #1 was completed in 1915. In conjunction with the locks built in 1917 and 1935 outside Elizabethtown and Fayetteville it ensured a navigable channel for barges carrying shiploads of timber petroleum and other materials opening up the 100-plus miles of river from Wilmington to Fayetteville to commercial vessels other than shallow drift paddlewheelers and flat-bottom barges and rafts.

The lock gates aren’t opened very often these days but the river and the surrounding green space are busier than ever. Outdoor enthusiasts come here for fishing and boating. Families come to picnic while enjoying the beautiful views.

“It’s part of our mission to provide recreational opportunities to people and in doing that to help them gain a sense of stewardship for the environment that they’re using so that it can be maintained and used for future generations ” Pillow says.

Environmental groups like Cape Fear River Watch (CFRW) use the space to get children excited about nature and the part they play in keeping the river clean. These programs have a heavy focus on conservation efforts and water safety practices.

“Environmental education is really about giving them a different kind of experience a way of visualizing and getting hands-on with these kinds of things so that we can create that bond between them and the environment ” says Madi Polera assistant project manager with CFRW. “The locks and dams were first built in the early 1900s so you have a really rich massive structure to be able to talk about the history and the heritage of the river and the people and the fishery. We can bring all of that together and you can visualize it there and you can stand on that land and actually see this 100-year-old monstrosity.”

The U.S. Army Corps of Engineers completed the plans and the clearing of the Lock and Dam #1 site in 1912. Construction began on March 15 1913 starting with the cofferdam — a watertight enclosure that’s pumped dry to allow construction below a waterline. The pouring of the foundation began in late December.

The project ran into many problems along the way including leaks and flooding in the cofferdam. “If any site could be found more unsuitable for foundation purposes it has not come to my attention ” district engineer Horton Stickle wrote in 1914. Nevertheless the engineers pushed through each obstacle and completed the structure on July 12 1915.

As boats approached the lock they were required to signal the lockmaster by giving a series of whistle blasts no less than one-quarter of a mile from the gates.

“In the old days when somebody would come up they’d blow their horns ” Pillow says. “Then the lockmaster would go down and lock them through.”

Even after sending their alert vessels were not to come within 300 feet of the lock until the lockmaster had raised or lowered the water level and opened the gates for incoming traffic.

Before 1963 when a 0.5 horsepower motor was added all gates and valves were opened manually. A steel wrench was fitted into a capstan — a revolving cylinder with a vertical axis used for winding a rope or cable. Turning the wrench triggered the gate mechanism and either pulled it open or pushed it closed. Four wrought iron valve jacks located on top of the gate controlled water levels.

The area was opened to recreational visitors as early as 1947 and underwent a complete overhaul in the early 1960s with the installation of a public boat ramp and restrooms.

A fishing pier added five years ago enticed even more visitors. The most common fish caught in these waters include American shad striped bass and sturgeon. Others are different types of bluegill and catfish.

While the lock and dam system succeeded as a means to get commercial boat traffic up and down the river it had the unfortunate consequence of preventing anadromous fish — those that migrate from salt water to spawn in fresh water — from doing the same. Over the years it became apparent that their populations were on the decline. Striped bass sturgeon and shad were all affected by the structure.

The construction of rock arch rapids completed in 2012 was meant to help revive those populations. The fish passage is a series of boulders and rocks that simulate natural rapids with pools to rest in along the way. It has been largely successful with some fish but not all.

“Shad have figured it out ” Polera says. “It looks like from tagging and stocking data that stripers are passing about 20 percent right now. That’s why we’ve got another $684 000 from the Coastal Recreational Fishing License Fund to re-engineer the passage at Lock and Dam #1 to better suit the stripers.”

Along with the reconstruction of the fish passage there are other efforts in place by Cape Fear River Watch and Cape Fear River Partnership to replenish these depleted populations. Children and young adults attending environmental classes and programs at the lock and dam have the opportunity to help raise anadromous fish from eggs and release them into the river.

There are also a multitude of studies underway to determine how to improve the work being done.

“There is still a lot more to the picture with fishery restoration ” Polera says. “Is it where we’re stocking them is there a chemical key that we’re missing are we just waiting on that older generation that knows what to do when they hit that fish passage to have the drive to get up there? Is it a water quality thing is it a habitat thing? So all of those different pieces still need to come together. It’s not just going to be this passage portion.”

With classes and programs available to elementary middle and high school students as well as adults there are many opportunities to learn about the history stewardship and conservation of the Cape Fear River and the wildlife that relies on it for survival.

Visitors can stroll along the boardwalk to see local fauna and flora including pileated woodpeckers cormorants white ibis frogs and snakes. They can check out the rain garden to catch a glimpse of the bees and butterflies or visit the fishing pier with some buddies.