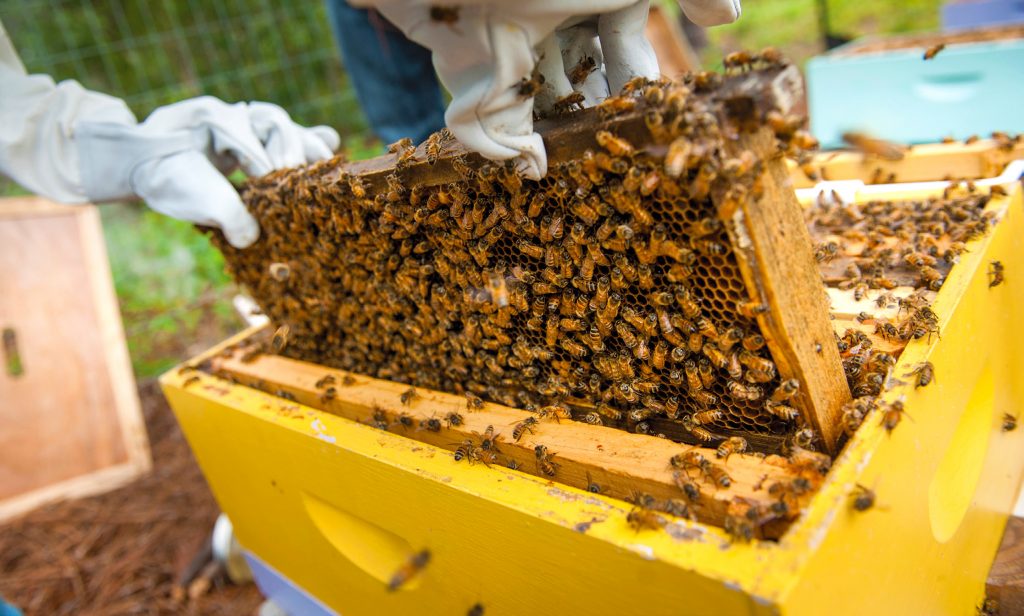 UNCW received their first hive of honey bees that is cared for by the UNCW Beekeepers Club, a group of students instructed by Environmental Studies associate professor Anthony Snider. PHOTO BY: JEFF JANOWSKI/UNCW

Like many people, Lauren Calhoun had heard about declining honeybee populations in the United States. But she didn’t understand the extent of the problem until she studied the impact of pesticides and disease on bees during her freshman year at the University of North Carolina Wilmington.

“The big takeaway was how important honeybees are to us as human beings,” she says. “So much of the food we eat is pollinated by honeybees. North Carolina depends on honeybees. With no honeybees there are no farmers.”

She wanted to do something. She joined the nascent UNCW Beekeepers club and enrolled in a beekeeping class. She became president her sophomore year and served in that capacity for two and a half years, giving up the office this spring as graduation approached.

The UNCW Beekeepers exists to teach students, faculty and staff about honeybees — from pollination to honey production to health, economic and environmental benefits. In partnership with the New Hanover County Beekeeping Association, the club provides a hands-on way to ensure honeybees remain healthy and retain their vital role in the ecosystem.

“We want to let students know how to help the bees,” says Calhoun, an environmental science major. “Our end goal is for people to become beekeepers. The population of beekeepers is aging. The goal is to get younger.”

The club operates four hives tucked away in a low-trafficked corner of campus. During the summer, when honey production is in peak season, there could be as many as 60,000-80,000 bees in each hive.

“When you open a hive in summer the bees will just spew,” Calhoun says.

Before the fall semester, club members and volunteers harvest the honey.

“Harvesting honey usually takes place a week or two before school starts,” Calhoun says. “If you are in the area you are invited. This year we had a bottling party on a Saturday. We show them how to extract it, filter it, bottle it.”

A typical yield is about 15 pounds. It’s bottled and sold at the P.O.D. Market on campus for $9 a jar. There’s a buzz around campus when it goes on sale.

“We usually have about 150 jars, and it sells out in about two weeks,” Calhoun says.

The club is a registered nonprofit and all proceeds go toward expenses and upkeep. A starter colony of about 500 bees and queen costs about $200. A hive runs from $500 to $900. Then there’s the price of equipment and medicine.

“Buy your honey local,” Calhoun says. “Supermarket honey is not the same quality as at a farmers’ market. If you have seasonal allergies, local honey has been shown to reduce them. It’s not super filtered, and has some of the pollen in it.”

The Beekeepers hold monthly meetings when school is in session.

“Most people come out because they are curious to know more,” Calhoun says. “Bees are such a unique insect, a cute insect. People tell me they are afraid of bees or afraid of getting stung, but the club isn’t all about putting your hand in the hive. It’s about learning. Come out and listen to us and talk about bees, absolutely come join us.”

Getting hands-on with honeybees is not a requirement to participate in the club, but it’s certainly encouraged.

“It’s kind of addicting when you go in the hive,” Calhoun says. “It’s always different, always surprising what you are going to find. There is a little fear, but we provide all the safety equipment. We’re all instructed what to do. We carry EpiPens at all times. Everyone is required to wear the veil. We try to prevent people from getting stung, but it does happen. I’m very fortunate, I’ve never been stung.”