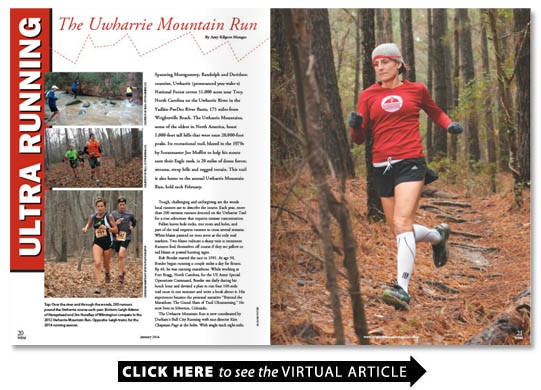 Spanning Montgomery Randolph and Davidson counties Uwharrie (pronounced you-wahr-e) National Forest covers 51 000 acres near Troy North Carolina on the Uwharrie River in the Yadkin-PeeDee River Basin 175 miles from Wrightsville Beach. The Uwharrie Mountains some of the oldest in North America boast 1 000-foot tall hills that were once 20 000-foot peaks. Its recreational trail blazed in the 1970s by Scoutmaster Joe Moffitt to help his scouts earn their Eagle rank is 20 miles of dense forest streams steep hills and rugged terrain. This trail is also home to the annual Uwharrie Mountain Run held each February.

Tough challenging and unforgiving are the words local runners use to describe the course. Each year more than 200 extreme runners descend on the Uwharrie Trail for a true adventure that requires intense concentration.

Fallen leaves hide rocks tree roots and holes and part of the trail requires runners to cross several streams. White blazes painted on trees serve as the only trail markers. Two blazes indicate a sharp turn is imminent. Runners find themselves off course if they see yellow or red blazes or posted hunting signs.

Bob Boeder started the race in 1991. At age 30 Boeder began running a couple miles a day for fitness. By 40 he was running marathons. While working at Fort Bragg North Carolina for the US Army Special Operations Command Boeder ran daily during his lunch hour and devised a plan to run four 100-mile trail races in one summer and write a book about it. His experiences became the personal narrative Beyond the Marathon: The Grand Slam of Trail Ultrarunning. He now lives in Silverton Colorado.

The Uwharrie Mountain Run is now coordinated by Durhams Bull City Running with race director Kim Chapman Page at the helm. With single track eight-mile 20-mile and 40-mile trail runs the Uwharrie Mountain Run has grown in popularity so much that it has sold out within 15 minutes of its registration opening causing the website to crash. Registration for the 2014 race was held by lottery for the first time.

Wrightsville Beach business owner Jason Adams 42 ran 20 miles at Uwharrie in February 2013. He says There are lots of spots on the course where you can easily take a wrong turn. Adams quickly went from being among the first 30 runners to being at the end of the pack. The first few runners missed the first turn on the trail causing others who were following to get off course.

The course can change quickly Adams explains. Once youre running for that long you zone out a little.

Despite taking the scenic route Adams placed fourth overall with a time of 3:06. Adams wife Leigh ran Uwharrie in 2012 and 2013. She too ran off track detouring for more than two miles.

But thats not that bad she says. It puts things in perspective. Its not a bad thing getting lost in the woods.

She placed seventh in the womens group with a time of four hours.

Rob Moore 39 local real estate Broker ran 40 miles at Uwharrie four years ago and achieved his goal time of about eight hours. It snowed that year and the creeks were high from all of the rain. Moore and other runners waded through waist-deep water.

It sucked Moore says with a laugh. I couldnt walk for a couple days like upstairs. It was really painful. It took me probably two to three months to fully recover from it. He says it may be a while before he runs Uwharrie again. But despite all of the challenges Moore isnt ruling it out. Put it this way he says. I could be talked into it.

So why run eight 20 or 40 miles in the mountains in freezing temperatures?

Its beautiful out there Jason Adams says. You get lost in your thoughts and it goes by quickly.

Local Elisabeth Mulligan ran the 20-miler in 2010 and 2011 because she says she was up for an adventure. In 2010 the area experienced a rainy winter and the river was swollen causing creeks to fill. The last six miles were run on the forest road which Mulligan says may have given her a false sense of security going into the 2011 race. She finished in 3:22 in 2010 and in 3:58 in 2011.

Uwharrie is an extremely challenging course. Its a fun weekend and the mountains are beautiful. I just love it Brandon says with a grin. Its freezing cold he adds. The course is mountains youre either going up the mountain or down the mountain. Theres very little flat ground in between. Mile 16 is straight up. You know its coming and how bad it is and how it hurts. It is tough.

To train Brandon runs from Wrightsville Beach to the Hilton Wilmington Riverside.

I can run distance anywhere he explains but its hard to train for Uwharrie here. To prepare Brandon runs the hills like the one on Nun Street by Elijahs Restaurant downtown bridges Brunswick Nature Park Blue Clay Road and Umstead State Park in Raleigh.

It wasnt my day he reminisces. I was four to five pounds heavier. I didnt dress properly.

Brandon will compete in the 2014 Uwharrie Mountain Run one of three in a series presented by Bull City Running Co. The Tough as Trails race series includes the Eno River Run held in October 2013 Uwharrie Mountain Run on February 1 2014 and the Mountain-to-Sea Trail Challenge on March 30 2014. Brandon adds Uwharrie doesnt get any easier even after 10 plus years.

Wilmington residents Tanner Konrady and his father Ralph were selected in the lottery to run the eight-mile Uwharrie for the first time in February. Tanner Konrady says he might train a little differently but hes not looking at Uwharrie as a competition. He is most looking forward to a fun and different challenge. Konrady says he is not really nervous and he just plans to roll with it.

Perhaps what Uwharrie best offers is the chance to run reflect and reap the rewards. The Uwharrie Mountain Run isnt just famous for its beauty or for the physical discomfort it may cause. Aid stations along the route are a highlight of the race fully stocked with anything a runner might need — from Gatorade to Tums. Then there are the infamous cookies. Packed with oats nuts chocolate and peanut butter these sweet treats are another reason runners fondly remember Uwharrie year after year. Upon race completion each runner receives a handmade piece of pottery.

Running the Uwharrie Trail is a true adventure that requires intense concentration.

The national forest terrain is hilly and the trail is treacherous.

Expect to trip and fall at least once during the day.

If you turn an ankle keep moving.

Dutchmans Creek flows along part of the trail and runners will enjoy numerous stream crossings which may mean wet feet.

The creek water is not safe to drink.

If you find yourself in a part of the forest posted with hunting signs YOU ARE OFF THE TRAIL.

Dont become discouraged if you get lost.

Rain which occurred in 2012 and 2013 or ice sometimes create wet and muddy conditions.

BE PREPARED FOR ANYTHING.

Six years later the race has raised $25 000 and grown to about 280 participants per year. One hundred percent of the proceeds are donated to the Ray Underhill Foundation and a family in need.

The 2014 race is scheduled for Saturday February 22 at the Brunswick Nature Park. Register online at www.runforray.com