Two Wheels Getting a Second Chance 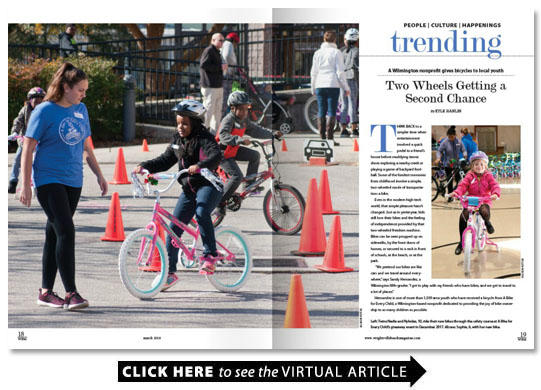 Think back to a simpler time when entertainment involved a quick pedal to a friend’s house before muddying tennis shoes exploring a nearby creek or playing a game of backyard football. Some of the fondest memories from childhood involve a simple two-wheeled mode of transportation: a bike.

Even in the modern high-tech world that simple pleasure hasn’t changed. Just as in yesteryear kids still love their bikes and the feeling of independence provided by that two-wheeled freedom machine. Bikes can be seen propped up on sidewalks by the front doors of homes or secured to a rack in front of schools at the beach or at the park.

“We pretend our bikes are like cars and we travel around everywhere ” says Sandy Hernandez a Wilmington fifth-grader. “I get to play with my friends who have bikes and we get to travel to a lot of places.”

Hernandez is one of more than 1 500 area youth who have received a bicycle from A Bike for Every Child a Wilmington-based nonprofit dedicated to providing the joy of bike ownership to as many children as possible.

The organization held its largest event to date on Dec. 16 2017. On that chilly Saturday Hernandez was one of more than 800 children from the Nourish N.C. program who along with their families flooded St. James Episcopal Church in downtown Wilmington. The crowd spilled out of the parish’s doors onto the sidewalk as anxious children waited to lay claim to a bike and helmet to call their own.

“It’s called an ‘Earn a Bike’ event ” says Kelly Cascaden founder and executive director of A Bike for Every Child. “We do that because we want to create a sense of ownership and pride so that they will take care of the bike and use the bike instead of just saying ‘Here’s your new bike have fun!’ They come they get measured and then they pick out whatever bike they want according to their size. They get fitted for their helmet and then we teach them basic bike maintenance skills like how to change a tire. Then they go through a safety course and that’s how they earn their bike. They have to go through all of those steps.”

Cascaden founded A Bike for Every Child in 2016 after she and her husband Clint saw a need for more children to reap the benefits that bicycles provide. The costs of bike ownership often prove difficult for families whose children most need the physical activity social engagement and sense of pride afforded by having their own bike.

“My husband and I were always passionate about giving bikes to kids for Christmas from the Angel Tree — but one or two ” Cascaden says. “I was in a leadership program where they asked us to create a program that would impact our community. I knew I wanted to find a way to raise funds and give kids bikes and it just evolved from there.”

From the Home Garage to Downtown

In March 2016 the newly formed nonprofit partnered with North Carolina grocer Lowes Foods to hold a bike drive and received more than 300 bikes in just 15 days. A Bike for Every Child held its first event three months later and distributed more than 200 refurbished bikes and new helmets to children from the Brigade Boys & Girls Club.

“That was really the first time we thought ‘OK this could really work ‘” Cascaden says. “It was not in our life plan to start a nonprofit. But after that first event we saw that there is a huge need the community is willing to support it and we hadn’t even scratched the surface.”

“We would have something like 200 bikes so now we’re known as the bike people ” she says. “We’re the first house in the neighborhood and everybody would say ‘What’s up with all of these bikes?’ In the backyard we had the bike graveyard and fortunately the homeowners’ association didn’t write us a letter when we had 100 bikes back there that we would just strip for parts.”

Clint would spend time repairing donated bikes with the help of volunteers.

“He was our lead mechanic for a long time ” Cascaden says.

“She would try to fix a bike that was a total disaster ” Mincher says. “She’s not afraid to get dirty but I would say ‘Kelly spin the wheels. Evaluate it and decide if you want to fix it.’ There is a method to the madness in bicycle repairs and she is learning it.”

Mincher is not a newcomer to the world of bike donation. His friend Bruce Watkins set out to provide a bike for every child at the Community Boys and Girls Club one Christmas.

“He was repairing them in his garage and he was at the shop every day after some little part ” Mincher says. “Finally I just told him ‘Bring your bikes in get on one of my work stands and start working on them and we’re going to help you.’ He started doing that and he got people to start dropping off their bikes at the shop. Then he moved to the mountains but the bikes kept coming.”

Mincher began partnering with local organizations to make bike donations when there was a need.

“They will tell us ‘You don’t know what those bikes mean to these people. It gives them freedom and a way to get somewhere.’ A lot of us take that for granted ” Mincher says. “I don’t even know how many bikes I’ve had in my life. It is moving. It means quite a bit to be able do it.”

Mincher has donated nearly 150 bikes to A Bike for Every Child as well as lending expertise.

“What Kelly is doing is amazing ” he says. “It’s awesome to be able to help someone like that.”

Taking off the Training Wheels

Cascaden’s dedication and hard work along with support from the community has helped A Bike for Every Child grow significantly. But it takes much more than Cascaden’s and mechanic Wells’ full-time attention. For the December event dozens of volunteers from St. James as well as other area churches and community organizations chipped in their time energy and know-how.

“This really has been a community thing ” Cascaden says. “All of these people had to give up their old bikes for this to happen and all of the sponsors that have donated money for the helmets and whatnot. That is part of our mission to have the community come together to support our youth and ride into happier and healthier futures.”

This year A Bike for Every Child will return to smaller events where it provides about 200 bikes and helmets to youth from different organizations.

“We will probably do one per quarter ” Cascaden says. “Another thing we are going to be doing is community bike repair days where we will go and set up in a park and let the community know that they can bring their bikes and we can help fix them. We know that things are going to happen so we want to be responsible and do whatever we can to keep these bikes on the road and kids enjoying them.”

For Sandy Hernandez Cascaden’s and the community’s efforts have helped that enjoyment become reality.

“Having my own bike has been really fun ” she says. “I’ve been playing with my friends more outside and getting much more exercise.”