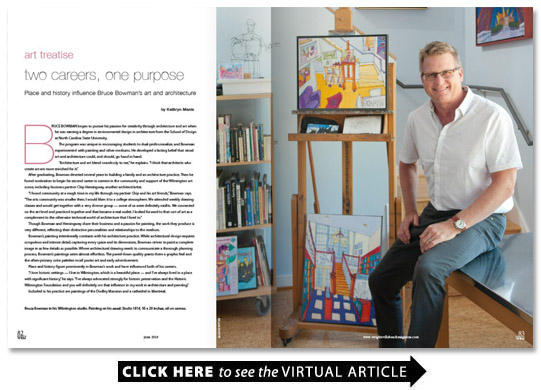 Bruce Bowman began to pursue his passion for creativity through architecture and art when he was earning a degree in environmental design in architecture from the School of Design at North Carolina State University.

The program was unique in encouraging students to dual-professionalize and Bowman experimented with painting and other mediums. He developed a lasting belief that visual art and architecture could and should go hand in hand.

“Architecture and art blend seamlessly to me ” he explains. “I think that architects who create art are more enriched for it.”

After graduating Bowman devoted several years to building a family and an architecture practice. Then he found motivation to begin his second career in earnest in the community and support of the Wilmington art scene including business partner Chip Hemingway another architect/artist.

“I found community at a rough time in my life through my partner Chip and his art friends ” Bowman says. “The arts community was smaller then; I would liken it to a college atmosphere. We attended weekly drawing classes and would get together with a very diverse group — some of us were definitely misfits. We connected on the art level and practiced together and that became a real outlet. I looked forward to that sort of art as a complement to the otherwise technical world of architecture that I lived in.”

Though Bowman and Hemingway share their business and a passion for painting the work they produce is very different reflecting their distinctive personalities and relationships to the medium.

Bowman’s painting intentionally contrasts with his architecture practice. While architectural design requires scrupulous and intense detail capturing every space and its dimensions Bowman strives to paint a complete image in as few details as possible. Where architectural drawing needs to communicate a thorough planning process Bowman’s paintings seem almost effortless. The pared-down quality grants them a graphic feel and the often-primary color palettes recall poster art and early advertisement.

Place and history figure prominently in Bowman’s work and have influenced both of his careers.

“I love historic settings — I live in Wilmington which is a beautiful place — and I’ve always lived in a place with significant history ” he says. “I’ve always advocated strongly for historic preservation and the Historic Wilmington Foundation and you will definitely see that influence in my work in architecture and painting.”

Included in his practice are paintings of the Dudley Mansion and a cathedral in Montreal.

In “Mitchell Anderson House ” a depiction of the orange brick home that boasts the title of the oldest structure in Wilmington Bowman imbues the building with remarkable vivacity. Rendered in brighter shades of orange and red than the nearly 300-year-old bricks can muster in person the image is simple yet detailed; subdued yet energetic. He represents the structure from the vantage point of the street corner including the outlines of nearby houses and stairs leading up from the sidewalk to the property.

Despite depicting robust scenery Bowman leaves out fine details like individual bricks and leaves on a tree in the foreground. He leaves large swaths of blank space throughout and thin solid layers of oil paint are all that is applied in these sections. The color palette is expressionistic including pale purples lime green and pinkish-reds.

By eliminating what he calls “visual clutter ” Bowman is able to more clearly communicate what is special and unique about his subject. Removing the excess detail also offers viewers an opportunity to appreciate a building scene or moment that they might not have otherwise.

“A lot of the scenes and cityscapes we encounter in our day-to-day lives are so visually complex ” he says. “If I can take that more complicated subject and break it down to the elements that speak to the essence of that thing it can bring some clarity to the viewer. Where someone may have walked by and not liked the building with all of the visual clutter when I remove some of that it helps you see it in a different light and makes the image more special.”

Bowman works in oil paint on canvas though past experimentation with watercolor is visible in the way he utilizes and applies color in his more recent work. The thick texture and blending ability of oil paint he says is ideal for creating a seamless but expressionistic finish.

He begins by laying out a simple drawing in charcoal on a wet unprimed canvas. He often uses semi-translucent oil paints and always applies them straight out of the tube. He avoids muddy browns and large sections of black opting for primary and secondary colors instead.

His tool of choice is a palette knife often rubber or silicon tipped which “feels like a brush but wipes clean like a knife ” he explains. This allows Bowman to maintain tight precise and often delicate lines that are evocative of architectural drawing while also producing a surface with a surprising amount of movement.

In “Benny’s Big Time Pizzeria ” Bowman takes on another subject with a simple brick exterior. The restaurant in the South Front District in a portion of the Block Shirt Factory features a floor-to-ceiling pizza mural on one side and old-fashioned marquee on the top left corner of its fa?ade along with an interesting roof line and arched entryway.

In Bowman’s reimagining the pizza joint’s appearance also reflects its communal role. While it is built out of the same style and shade of brick as other structures in the area Bowman represents it in a bright saturated firehouse red. The perspective is realistic but exaggerated and the paint application grants the scene an unexpected amount of kinetic energy. Looking at it one imagines spirited music emanating from its walls. Despite an absence of customers the scene is full of excitement and movement.

Bowman likes to play with expectation in his work often creating contradicting moods and exaggerated details that playfully catch the eye.

“I am playing with weird perspectives and weird points of view ” he says. “Sometimes I’ll do this with a view of the structure from the air or by creating things that are out of kilter like seeing multiple planes at the same time. I use these techniques because I want the viewer to wonder ‘What’s wrong what’s causing this?’ Trickery catches the viewer’s attention. If you can hold that for a few minutes then they’re having a conversation with the piece and that’s a remarkable thing. I don’t typically include figures in my work but the viewer is always a subject in my paintings.”

Bowman is an admirer of the Expressionist movement and artists like Picasso and Matisse and his work has a lighthearted emotive quality. E.L. Kirshner a founding member of the Die Brucke group and instrumental figure in the Expressionist movement once stated “Everyone who renders directly and honestly whatever drives him to create is one of us.” In each of Bowman’s compositions the attentive viewer learns something about the artist and his personality as well as the space he depicts.

This is evident in pieces like “Hook and Ladder No. 8 ” depicting the Manhattan Firehouse made famous by the cult classic “Ghostbusters ” and “Falling Water ” showcasing the iconic Pennsylvania home designed by Frank Lloyd Wright.

“Falling Water” captures the movement and mist of the small waterfall at the base of the structure through moody atmospheric paint application and imbues the scene with a brighter more enthusiastic tone than it has in person. “Hook and Ladder No. 8” utilizes shades of pink and pale purple shrinking the perspective of the image such that depth of field and background imagery are piled on top of each other. The lines have a sketchy quality reaching centimeters beyond the corners they create. Both demonstrate Bowman’s tongue-in-cheek sense of humor passion for the quirky details that make a building unique and joyful relationship to the painting process.

Bowman has a distinct and intellectual relationship to art and is well versed in conversations about originality and reproduction. He describes his work as both derivative and original referring specifically to Picasso’s practice of incorporating and advancing the techniques of other artists. This recalls the phrase often and perhaps incorrectly attributed to Picasso that “Good artists copy great artists steal ” meaning that an artist should make studied techniques his or her own not merely recreate them.

This interest connects to his hope that viewers will be able to relate to and interpret his work in a way that is meaningful to them. Bowman’s wife Colleen Reilly is a professor of English at University of North Carolina Wilmington and often appreciates aspects of his paintings that he is displeased with.

Bowman’s paintings are a notable combination of sincerely celebratory and teasingly humorous and invite the viewer to stop and think.