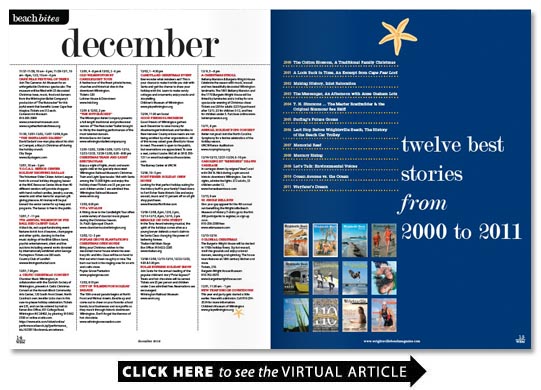 2003    The Messenger An Afternoon with Anne Graham Lotz

Story content photographic integrity design creativity and cover art that captures the essence of where weve been and who we are today were among the criteria we used to pick the top twelve stories of 2000 to 2011. In the twelfth month of the twelfth year since Wrightsville Beach Magazine has been in publication the staff chose its favorite stories to share with our readers.

The stage was set for a picture-perfect Norman Rockwell-style holiday in the beach home of Joan Gillings. With all of the trimmings the centerpiece of this home feature published in the inaugural issue of Wrightsville Beach Magazine was the historic house itself. Built on East Oxford Street in 1945 the Cotton Blossom was once a guest cottage for the J. Holmes Davis family.
By Pat Bradford

A Look Back in Time an excerpt from Cape Fear Lost

Pembroke Park now known as Landfall was the hallowed playground of Jones a 3 000-acre wilderness reserved for Jones and his distinguished guests. Wilmingtonians called it The Lodge Jones called it The Bungalow but the Italian ambassador who once visited Pembroke Park reportedly declared the Italianate mansion the most perfect note of Italy in America. Long gone but not forgotten fabulous black and white photographs illustrate the dynastic dwelling.
By Susan Taylor Block

In the natural progression of inlet history a new inlet must open before an old inlet closes. Though there was nothing natural about moving Masons Inlet the grandest manmade engineering feat in Wrightsvilles history a relocated Masons Inlet opened on March 2002 when the sheet piles holding back the inlet were lifted and the Atlantic Ocean flowed through its new mouth. The old inlet which had for 14 years drifted 3 000 feet south precariously close to the Shell Island towers was closed a week later.
By Pat Bradford

Each year multitudes of people flock to our shore to enjoy what locals know is a personal slice of the Promised Land. It has been this way for more years than anyone alive can count. One such famous face belongs to Anne Graham Lotz the daughter of renowned Christian evangelist Billy Graham and his late wife Ruth. Like most North Carolinians the Graham and Lotz families have been coming to the beach for generations. And like her father and her brother Franklin Anne has dedicated her life to Christian outreach.
By Pat Bradford

One of the most unique maritime boatbuilding stories occurred on Myrtle Grove Sound between 1946 and 1972. T. N. Simmons a simple man with nothing but a sixth grade education and an inborn talent for making things out of wood invented a wooden skiff that has become one of the most highly sought-after boats by collectors in the world. Meet the man who created the masterpiece known as the Simmons Sea Skiff and relive the glory of these boats with us.
By Ginger Ebert

The word grommet is loosely translated to mean young surfer. Wrightsvilles young surfer tribe ranges in ages and backgrounds but shows one common love that of the sea and riding waves. They all have the potential to aspire to become whatever they want to be. To the dream of being a professional surfer to the goal of owning a private business these young surfers have futures as bright as their smiles.

The beach trolleys once ran from Princess Street to the end of the line at Lumina Pavilion. Take a ride on the Beach Car with Bill Creasy Hugh McRae II and Jesse Willet as they recount their childhood memories and reflect on the days before 1940 when the journey to the beach was part of the fun.
By Marimar McNaughton

With a light wind out of the northeast and a seawater temperature of 82 degrees it was a glorious day for the final lap of a two-year odyssey the reefing of a rechristened 180-foot menhaden boat dedicated to the memory of Captain Greg MicKey the 49-year-old husband father friend and expert diver who was lost at sea in June 2005.

The first in-depth story about the threat to the public health and the environmental impact of the proposed Titan Cement plant on the Northeast Cape Fear River. A lot has been written since. All but the final chapter.

Stowaway aboard a trip through this lavish West Indies-inspired home located on the waterway in Landfall. Architecturally designed by Chuck Dietsche and built by Chris Martin the pilot for Revenge was shot in this location in the summer of 2011. The interior was recreated in Hollywood as the home of Victoria and Conrad Grayson.

By Shannon Darrough and Marimar McNaughton