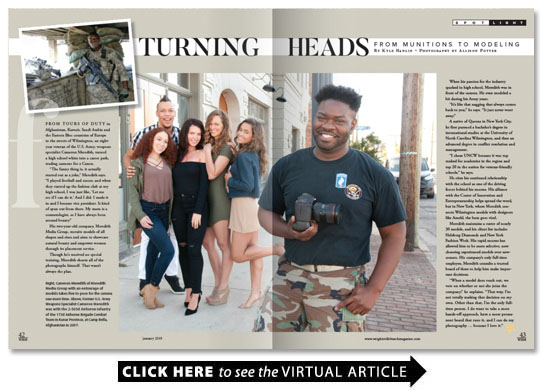 From tours of duty in Afghanistan Kuwait Saudi Arabia and the Eastern Bloc countries of Europe to the streets of Wilmington an eight-year veteran of the U.S. Army weapons specialist Cameron Meredith turned a high school whim into a career path trading cannons for a Canon.

“The funny thing is it actually started out as a joke ” Meredith says. “I played football and soccer and when they started up the fashion club at my high school I was just like ‘Let me see if I can do it.’ And I did. I made it in and I became vice president. It kind of spun out from there. My mom is a cosmetologist so I have always been around beauty.”

His two-year-old company Meredith Media Group recruits models of all shapes and sizes and aims to showcase natural beauty and empower women through its placement service.

Though he’s received no special training Meredith shoots all of the photographs himself. That wasn’t always the plan.

When his passion for the industry sparked in high school Meredith was in front of the camera. He even modeled a bit during his Army years.

“It’s like that nagging that always comes back to you ” he says. “It just never went away.”

A native of Queens in New York City he first pursued a bachelor’s degree in international studies at the University of North Carolina Wilmington and then an advanced degree in conflict resolution and management.

“I chose UNCW because it was top ranked for academics in the region and top 20 in the nation for veteran-friendly schools ” he says.

He cites his continued relationship with the school as one of the driving forces behind his success. His alliance with the Center of Innovation and Entrepreneurship helps spread the word but in New York where Meredith connects Wilmington models with designers like Amehl the buzz goes viral.

Meredith maintains a roster of nearly 30 models and his client list includes Helzberg Diamonds and New York Fashion Week. His rapid success has allowed him to be more selective now choosing experienced models over newcomers. His company’s only full-time employee Meredith consults a trusted board of three to help him make important decisions.

“When a model does reach out we vote on whether or not she joins the company ” he explains. “That way I’m not totally making that decision on my own. Other than that I’m the only full-time person. I do want to take a more hands-off approach have a more permanent board that runs it and I can do my photography — because I love it.”