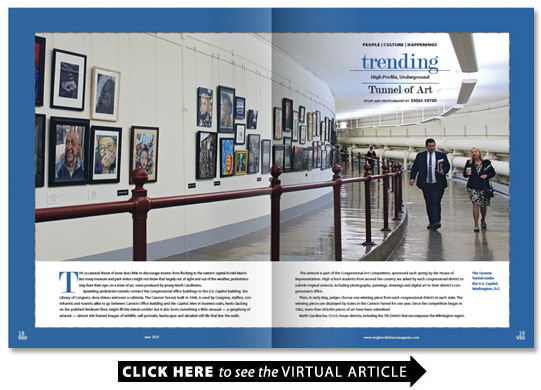 The occasional threat of snow does little to discourage tourists from flocking to the nation’s capital in mid-March. But many museum and park visitors might not know that largely out of sight and out of the weather pedestrians may feast their eyes on a trove of art some produced by young North Carolinians.

Sprawling pedestrian tunnels connect the congressional office buildings to the U.S. Capitol Building the Library of Congress shoe-shines and even a cafeteria. The Cannon Tunnel built in 1908 is used by Congress staffers constituents and tourists alike to go between Cannon Office Building and the Capitol. Men in business suits heels clacking on the polished linoleum floor might fill the metal corridor but it also hosts something a little unusual — a symphony of artwork — almost 400 framed images of wildlife self-portraits landscapes and detailed still life that line the walls.

The artwork is part of the Congressional Art Competition sponsored each spring by the House of Representatives. High school students from around the country are asked by each congressional district to submit original artwork including photographs paintings drawings and digital art to their district’s congressman’s office.

Then in early May judges choose one winning piece from each congressional district in each state. The winning pieces are displayed by states in the Cannon Tunnel for one year. Since the competition began in 1982 more than 650 000 pieces of art have been submitted.

North Carolina has 13 U.S. House districts including the 7th District that encompasses the Wilmington region. The 7th District 2018 competition brought images of church steeples ballerinas dogs and Venus flytrap gardens encompassing the 2018 theme “what I love most about North Carolina.” Soon these images will be replaced by 2019 winners showcasing images of “my hometown.”

Each young artist receives two round-trip tickets to Washington and to an exclusive reception inside the U.S. Capitol. Rouzer also selects a runner-up to display his or her art in his Cannon Office Building suite for the year.

“The artwork is on display for hundreds of people each day ” Rouzer says. The competition has long been a tradition for Congress but Rouzer says he holds a special place in his heart for young people’s art in part because art was a big part of his middle-school years. “My mom still has my artwork on display.”