True North on the South End 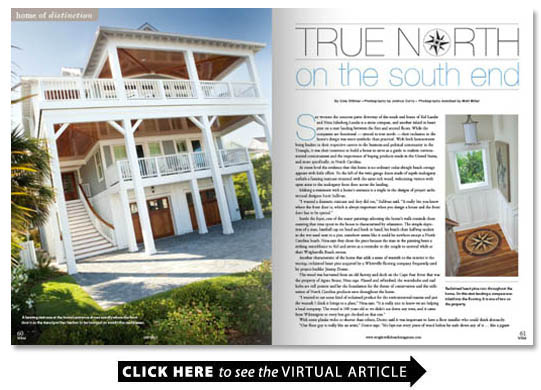 Set within the concrete paver driveway of the south end home of Kel Landis and Nina Szlosberg-Landis is a stone compass and another inlaid in heart pine on a stair landing between the first and second floors. While the compasses are functional synced to true north their inclusion in the homes design was more symbolic than practical. With both homeowners being leaders in their respective careers in the business and political community in the Triangle it was their intention to build a home to serve as a guide to realistic environmental consciousness and the importance of buying products made in the United States and more specifically in North Carolina.

At street level the evidence that this home is no ordinary cedar shingle beach cottage appears with little effort. To the left oAf the twin garage doors made of sapele mahogany unfurls a fanning staircase trimmed with the same rich wood welcoming visitors with open arms to the mahogany front door across the landing.

Making a statement with a homes entrance is a staple in the designs of project architectural designer Scott Sullivan.

I wanted a dramatic staircase and they did too Sullivan said. It really lets you know where the front door is which is always important when you design a house and the front door has to be special.

Inside the foyer one of the many paintings adorning the homes walls reminds those entering that time spent in the house is characterized by relaxation. The simple depiction of a man baseball cap on head and book in hand his beach chair halfway sunken in the wet sand next to a pier somehow seems like it could be nowhere except a North Carolina beach. Nina says they chose the piece because the man in the painting bears a striking resemblance to Kel and serves as a reminder to the couple to unwind while at their Wrightsville Beach retreat.

Another characteristic of the home that adds a sense of warmth to the interior is the wormy reclaimed heart pine acquired by a Whiteville flooring company frequently used by project builder Jimmy Doster.

The wood was harvested from an old factory and dock on the Cape Fear River that was the property of Agnes Beane Nina says. Planed and refinished the wormholes and nail holes are still present and lay the foundation for the theme of conservation and the utilization of North Carolina products seen throughout the home.

I wanted to use some kind of reclaimed product for the environmental reasons and just the warmth I think it brings to a place Nina says. It is really nice to know we are helping a local company. The wood is 100 years old so we didnt cut down any trees and it came from Wilmington so every box got checked on that one.

With some planks wider or shorter than others Doster said it was important to have a floor installer who could think abstractly.

Our floor guy is really like an artist Doster says. He lays out every piece of wood before he nails down any of it like a jigsaw puzzle to make sure the grain looks like it should.

While the reclaimed heart pine is ever visible within the home one of the most important unseen aspects is its energy efficiency.

It is the only home on the island with an Energy Star 3.0 classifi­cation from the United States Environmental Protection Agency and it was Ninas work in the conservation sphere of state politics that led to the decision to pursue the classification.

The easiest thing in the world to do is energy efficiency she says. You dont have to build a geodesic dome or build some funky-looking solar house. You can just build a regular traditional house and can make some really energy-efficient choices.

For Doster the pursuit of the Energy Star 3.0 label meant more hours than usual spent calculating energy needs given the stringent criteria.

They make you do so many calculations; it is a lot of work to get to that level he says.

One of the factors that helped the Landises achieve the highest Energy Star rating was Dosters use of a liquid membrane to wrap the house. Tightly sealing all gaps and holes while allowing the house to breathe Doster says the EnviroDri membrane is a little more costly than normal wrap but a superior product.

In addition to the energy conservation-focused requirements the Landises had for Doster and Sullivan one other requirement was to create a spacious elegant and inviting living room.

Arranged beneath the vaulted ceiling paneled in more reclaimed heart pine are pieces of custom furniture. Against tan walls shades of sea glass aqua sand and cream are prominent colors featured in furniture pieces like the dining table kitchen counter stools and the living room rug. The color palette was chosen by Nina to represent the south ends natural setting.

I wanted to bring the outside in Nina says. The whole interior color set really revolves around the sand and sea. All of the walls are sand and we have that sea foam color brought into basically all of the rooms.

In this way the living room serves as a microcosm for the rest of the home and not only in color palette but also in the handmade North Carolina products that appoint the space. Like energy efficiency buying local is another initiative the Landises take to heart evident in choices like using Hickory Furniture Company for many of the pieces in the dining room and Jessica Charles swivel rockers set opposite a pair of Taylor King Marchesa club chairs in the living room.

We tried hard to buy as much as we could from North Carolina she says. Buying local is good for the environment it creates jobs and things dont have to travel as far. Anyone can do it you just have to be intentional. You can sacrifice a little bit of price for doing the right thing.

Wrapped around the exterior east wall of the living room is one of the three decks Sullivan incorporated into the home and a space used often when the entire family visits. All of the decking is recycled composite which Doster said would last a lifetime without having to be replaced.

Facing the sea and shaded the main deck is kept cool any time of day with the option for those desiring a tan to venture to the southern corner open to the suns rays.

For the Landises Sullivans decision to divvy the allotted deck space between floors was a great addition.

He took the really rigid CAMA regulations on the percentage of decking you can have relative to the square footage of the house and did that so creatively that we have this big beautiful deck coming off the great room and we were also able to have a smaller deck coming off the downstairs bedrooms and a little private deck off the master bedroom Nina says.

Sullivan says he knew the master suite on the third floor would be his best opportunity to tap into the views surrounding the home on the interior south end lot.

Every house at Wrightsville Beach has an opportunity to capture something he says. The oceanfront houses are easy the waterfront houses are easy but the interior homes have few windows and opportunities that are sometimes hard to see. With this one we knew we would get some sunset views and down toward Masonboro so we capitalized on that.

Reflecting on the project the Landises attribute much of what the structure achieves to the ingenuity of both designer and contractor.

We generated the idea and both Scott and Jimmy were great to work with Nina says. I have to give it to them they were very open minded and worked really hard to help make it happen for us.

Now that the home is finished and furnished Kel says they intend to name the home True North after the best-selling 2007 work of the same name by Harvard Business School professor Bill George which has profoundly influenced the way he and Nina make their decisions in business and life. In his work George lectures on the importance of finding ones true self and making decisions based on that principle. In the case of their new island retreat the Landises have done so by achieving the highest possible energy efficiency rating and making a commitment to filling their home with North Carolina products.

Kel says If you always make decisions from your true self then most of the time you are going to make good decisions.