BY Pam Creech and Simon Gonzalez 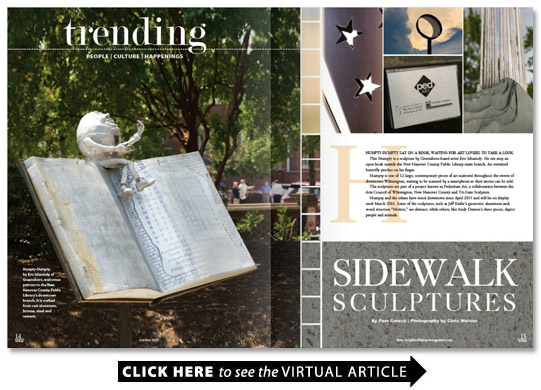 Humpty-Dumpty sat on a book waiting for art lovers to take a look.

This Humpty is a sculpture by Greensboro-based artist Eric Isbanioly. He sits atop an open book outside the New Hanover County Public Library main branch. An oversized butterfly perches on his finger.

Humpty is one of 12 large contemporary pieces of art scattered throughout the streets of downtown Wilmington waiting to be scanned by a smartphone so their stories can be told.

The sculptures are part of a project known as Pedestrian Art a collaboration between the Arts Council of Wilmington New Hanover County and Tri-State Sculptors.

Humpty and the others have stood downtown since April 2015 and will be on display until March 2016. Some of the sculptures such as Jeff Kiefer’s geometric aluminum-and-wood structure “Motion ” are abstract while others like Andy Denton’s three pieces depict people and animals.

Rhonda Bellamy executive director of the Arts Council of Wilmington says anyone with a smartphone can download the Arts on Tour mobile app at www.artswilmington.toursphere.com to find the location and information about each sculpture.

“You can go up to any of the Pedestrian Art pieces and scan it and be able to listen to the artist tell their inspiration behind the piece ” Bellamy says.

Some of the outdoor artwork is installed on 4-foot by 4-foot concrete pads sponsored by local businesses through an adopt-a-block program.

“That’s how we piece it together ” Bellamy says.

Tri-State Sculptors a nonprofit organization that promotes public awareness and appreciation of sculpture in Virginia North Carolina and South Carolina submitted the public art for consideration.

“The Pedestrian Art Committee which is a committee of the arts council chaired by Kim Adams selected the sculptures ” Bellamy says. “We received 31 submissions and we put up 12.”

“It was a natural partnership ” Bellamy says.

Combine a broadband television network a furniture store and a dream to spend time at the beach and the result is Renovating Wrightsville an internet-only series featuring Jason Harris’ vacation home on East Asheville Street.

Harris is the co-owner and executive vice president of Furnitureland South the High Point-based business known as the largest furniture store in the world. He also is founder president and CEO of The Design Network an interactive website featuring videos about home design and furnishing.

Harris and his wife Jenny began searching for a beach house more than five years ago.

“My wife is a beach nut ” he says. “She loves having the sand in her toes. We used to vacation down in Emerald Isle but we started falling in love with this community. We have a lot of friends who live here. I got my sights set on Wrightsville Beach and studied it for years.”

As Harris was waiting for the perfect property to become available he launched The Design Network featuring original video series about design decorating and DIY available on the web and via internet-based distribution vehicles like Roku.

“I had this clear vision to create a network that would be broadband-based video entertainment of all things home ” he says. “Everybody thought I was off my rocker to start this thing. I saw the power of video. There’s a transition going on from cable and satellite TV into broadband. A couple of years from now broadband is going to be the way we get our television. The future of TV is apps.”

He also saw the ability to fill a void for the type of content he envisioned.

“We’re in the epicenter of this world of design ” he says. “Who better than us to create a new type of network leveraging the resources and relationships with the great interior designers that we’ve got with the brands that can come in and support this?”

While Jason pitched his concept lined up sponsors and launched the network he and Jenny continued their search for a place at Wrightsville Beach that would be a vacation home for their family of five children. Finally they found the house on East Asheville.

“For a long time we searched down here ” Harris says. “A friend of ours recommended this.”

Jason and Jenny loved the location. The second-row house has beautiful ocean views and is steps from the beach and within easy walking distance of Banks Channel for paddle boarding and kayaking. The couple also loved the layout. But it needed renovating to make it their dream home.

Harris contacted Salt Lake City-based interior designer Ann-Marie Barton. She had been introduced to him by CBS sportscaster Jim Nantz a mutual friend and is one of the hosts on The Design Network.

“I reached out to her when we were thinking about buying it and wanted her opinion ” Harris says. “She really encouraged us to buy it.”

Harris hired Barton as the designer. He and Jenny discussed their ideas with her and she worked on the details for paint colors furnishings and fixtures. Wilmington contractors Chambliss & Rabil were hired to implement the vision.

Somewhere along the way Harris realized his own renovation project would make great programming for his network.

“It was really more about just a vacation home for us at first then we said why not leverage it for the network?” he says. “It never really was a marketing thought but as we got into it I knew this would be a great series using Ann-Marie because she’s such a great host.”

Not only would it provide programming for the network but the renovation would also serve to promote his other business.

“We knew we could do tons of product integration in this because all the products would come from Furnitureland ” he says.

The renovation project ended up being a four-episode series on the network with plenty of product placement much of which gives viewers a chance to purchase what they see on the screen.

“Our vision long-term is to create an e-commerce platform within thedesignnetwork.com where the products and things you see in these videos you can shop for ” Harris says.

What the viewer sees through TV is reality for Harris. He sat in his bright airy living room on a sunny summer day in early September looking out the expansive windows at the ocean and his neighbors’ homes.

“There’s something special about this place ” he says. “We fell in love in this community. It just turned out to be the perfect place the perfect street.”

Coming in December: Take a look inside the house as the Harrises prepare to spend their first Christmas at Wrightsville Beach.