Trending: What NOT to do this Easter: Rabbit Rescue 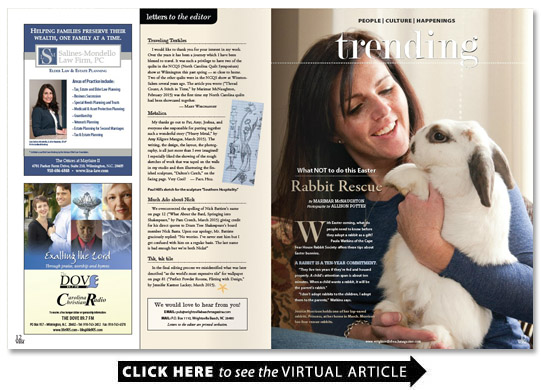 What NOT to do this Easter: Rabbit Rescue

With Easter coming what do people need to know before they adopt a rabbit as a gift?

A rabbit is a ten-year commitment.

“They live ten years if they’re fed and housed properly. A child’s attention span is about ten minutes. When a child wants a rabbit it will be the parent’s rabbit.”

“I don’t adopt rabbits to the children I adopt them to the parents ” Watkins says.

House rabbits are prey to predators just like their backyard cousins.

“Everything is out to eat them ” she says. “They have that prey animal mentality. They’re different from dogs and cats in that aspect and even though they are more domesticated than the wild rabbits in the yard?? they’re not ideal pets for small children. Starting about age six or seven they’re OK pets for children as long as the parents are engaged and are willing to be the primary caretaker.”

Understand the rabbit’s personality. They’re more like cats; they’re friendly they’re social but you have to let them approach you on their terms.

“You can’t just run over and pick them up.? They’re ground loving creatures ” Watkins explains. “They’re very frightened if their feet are off the floor. They associate that with a bird of prey; that’s not something they like. Children like to pick up and carry around an animal because that’s what they do with their stuffed toys. That’s probably the total opposite of what a rabbit wants to have done to them.”

Let the rabbit come to you.

“They love to sit on the couch and watch TV. The rabbit is going to be naturally curious see what the kids are up to and hop all over them ” Watkins says. “It’s when they’re being chased they don’t like it.”

Once they’re spayed and neutered rabbits use a litter box.

“They don’t need to be confined to a cage.”

They’re high-energy animals so they need three to four hours of good exercise every day.

“We recommend they get out of their enclosure and interact with the family ” Watkins says.

Rabbits dig and chew by nature. Wild rabbits in the yard dig burrows. Domestic rabbits have that same instinct.

“A lot of times people will give up rabbits to shelters because ‘They’ve destroyed my house they’ve chewed my cords they’ve dug under my carpet they’ve gotten under my couch.’ That’s probably the No. 1 reason rabbits are given up to shelters ” Watkins says.

Bunny proof your home. The rabbit only needs one room.

“They prefer the room you’re in ” Watkins says.

“Don’t go to a pet store or a feed and seed store and adopt a baby rabbit. You don’t know what the personality of that rabbit’s going to be ” Watkins says.

If you have a smart phone or digital camera you now have a way to transfer your favorite image onto fabric. With software like Photoshop or Adobe Illustrator manipulate the image. From there it’s just a short leap to tea towels with your grandma’s favorite recipe printed on them to scarves with images of local beach finds or wall hangings covered with old maps of Wilmington.

All this is done by way of Spoonflower.com a site for creative people who want to test a fabric design or a product in small quantities or for hobbyists who want to make unique textiles wallpaper designs or gift wrap.

“Anything you can scan you can print on fabric ” says hobbyist Margaret Vanderford of Wilmington. Vanderford recently used Durham-based Spoonflower to turn family recipes into tea towels a process she found on the company’s blog.??

Before Spoonflower came along in 2008 there was no way for lovers of textiles to turn images into fabric without breaking the bank. Creative people could buy materials for ceramics or watercolors but textile designers were challenged if they wanted to produce small quantities.?

“A minimum run for fabric would be in the thousands of yards ” says Spoonflower co-founder Stephen Fraser. “There was a lot of risk in trying new things. We tapped into a passionate creative community of artists and designers from all over the world who love fabric and love the different kinds of fabric and color and texture.”? These people shared their creative ideas with Fraser and his business partner Gart Davis. Social media spread the word and the company exploded.?

“I wouldn’t have a company if it weren’t for Spoonflower ” says fabric designer Margaret Turner Clarke of Margaret Turner Designs. Clarke’s designs were born from her love of Masonboro Island and Wrightsville Beach where she was born and reared.

“The detail is incredible ” Clarke says. “The image is exactly as I found it on the beach.”

Not everyone starts with a photo. Many graphic designers create their own digital artwork to print on one of the company’s 15 fabrics everything from combed cotton to silk crepe de chine which run on the large format inkjet printers. Scores of these designers make their designs available to the public on the company’s site and share their successes on the company’s blog and through an array of social media. Minimum orders range from one yard to a five-inch swatch.

Vanderford was looking for unusual Christmas gifts on Pinterest when she found the images of personalized tea towels from Spoonflower’s blog. She asked family members to share old recipes from her grandmother and from their grandmothers.?

At first she photoshopped the images but as time went on she liked the more authentic look and used the original plain index card with its blue lines and food stains.

Everyone loved the gift. Family members whom she hadn’t talked to in ages called Vanderford to thank her. Most were ecstatic but one disgruntled aunt called to complain that the recipe was a disaster.

“I told her I couldn’t take credit for that and apologized for giving her a dud!” Vanderford says.

The project of turning the custom fabric into tea towels is simple she says.

“If you cut a rectangle on paper you can do it on fabric. Sewing a rectangle is pretty darn easy too!” she says.

The best part of the exercise for Vanderford was getting hold of her grandmother’s Shoo Fly Pie recipe now immortalized on the tea towel.

“It’s an old Pennsylvania Dutch recipe that my grandma passed down. I still have not been able to successfully make it ” she laughs. “But I have the recipe and I will always have it.”

For newbies Spoonflower makes it easy to test the waters by making up a swatch of the fabric. For those more advanced it’s easy to fill one-of-a kind orders — a baby blanket in a certain color to match the baby’s room for example. It is a little more difficult some artisans say to keep profit margins healthy with these small orders but some use Spoonflower as a stepping stone to bigger production runs elsewhere.

Whether for a hobbyist or a successful entrepreneur Spoonflower makes it easy to keep old memories new while making room for brand-new ones.?

Vinyl is returning to music and textile industries confirming what’s old is new again. In the music arena the older format has made a resurgence during the past few years an unexpected trend due to the devaluation of music today. Most young people stream their music for free through various services like Spotify and Pandora yet a rising group of individuals including recording artists and collectors are preserving the vinyl audio format. The result is galvanizing young people to support their favorite artists and spurring an interest in LPs some for the first time.

“We see tons of young people in our stores because of peer interest in vinyl ” says Matt Keen owner of Gravity Records. “Everyone streams music but if the album is something worthwhile people will still purchase physical records.”

Although most music stores have all but disappeared record stores like Wilmington’s Gravity Records persevere. The store is a welcome sight to collectors and music lovers who peruse the aisles for classics and hidden gems.

“All contemporary artists are putting their records out on vinyl ” says Gravity Records’ employee Ben Rose. “There’s a certain ritual of playing a record. You can’t skip tracks and you learn the concept of the album that the artist intended.”

Younger listeners are curious about vinyl records and crave the rich sound they provide. Music sites like iTunes and streaming services produce a compressed tone incomparable to vinyl. The digitalization of music as a medium has stemmed its decline leaving many recording artists with little to gain from releasing music in a conventional manner. In turn artists have begun releasing their albums on vinyl along with a digital download code for a melding of two worlds.

“I think that people realize the sound quality once they hear a vinyl record ” Keen says. “It’s become more of an expression. You can’t show people your music collection over a computer but you can display your record collection. Music is more than just ones and zeroes.”

Vinyl has made an impact in other places including fabric a field North Carolina designer Holly Aiken has taken advantage of to create a signature style of bags totes backpacks purses and more during the last decade. Her work has allowed her to open two Stitch retail locations: Raleigh and Wilmington. Aiken’s designs have also been placed in stores across the country. However she began her career in a different setting.

“I went to North Carolina State University and studied design ” Aiken says. “After I graduated I began work as a web designer for various sites. I sewed on the side as a hobby and crafted bags for my friends.”

Aiken began to lay the foundation for her career choosing vinyl as her medium because of its durability color palette and affordability. To help start her business she continued her web work for supplemental income.

“When I launched in 2004 I realized I had an advantage because I created my own website ” Aiken says. “Believe it or not but it was rare to have a personal site back then. People could search the Internet and find me immediately.”

Aiken’s accessories have a retro motif with a modern twist. Her designs are simple and easily recognizable with thick black trim geometrical shapes and contrasting colors. Most of her inspiration comes from Pop Art artist Claes Oldenburg and color theorist Josef Albers.

“It’s never been about the latest fashion trends or seasonal color palette ” Aiken says. “Fashion comes and goes; my work is more of an art statement.”

Another area Aiken dabbled in was making vinyl furniture in particular counter stools for restaurants. In addition to records and textiles vinyl is more popular than ever in the furniture market.

“Every vinyl piece I have goes out the door almost immediately ” says Randy Larson owner of Eclectic Etc. a Wilmington furniture store. “I just can’t keep any of it in stock. Mid-century modern furniture is in demand these days.”

Collectors young and old have reignited the production of vinyl furniture and are on the hunt for pieces from the mid 20th century.

“I think the popularity of vinyl is that it’s an antique but it looks like it hasn’t aged a day ” Larson says. “Couches and seats from the 60s look like they were made yesterday. The material is incredibly durable and easy to clean.”

The dominance of vinyl in the furniture market has sparked fabricators to produce vinyl pieces once more. However Larson says the material isn’t up to the caliber it was 50 years ago. Today vinyl fabric is thin and not as resilient. That assessment hasn’t dissuaded buyers but it has raised the value of vintage items.

“These trends were set in California and traveled to New York and then Miami ” Larson says. “Trends come in phases but vinyl is one thing that seems to last forever.”?