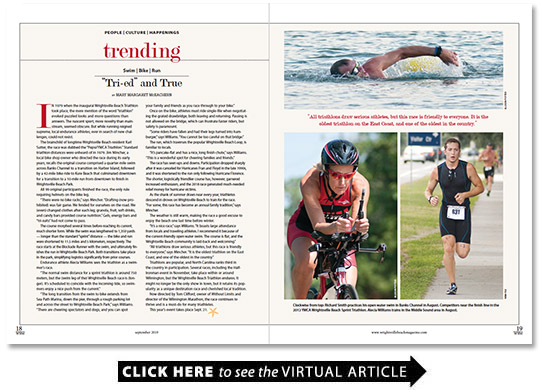 In 1979 when the inaugural Wrightsville Beach Triathlon took place the mere mention of the word “triathlon” evoked puzzled looks and more questions than answers. The nascent sport more novelty than mainstream seemed obscure. But while running reigned supreme local endurance athletes ever in search of new challenges could not resist.

The brainchild of longtime Wrightsville Beach resident Karl Sutter the race was dubbed the “Pepsi/YMCA Triathlon.” Standard triathlon distances were unheard-of in 1979. Jim Mincher a local bike shop owner who directed the race during its early years recalls the original course comprised a quarter-mile swim across Banks Channel to a transition on Harbor Island followed by a 42-mile bike ride to Kure Beach that culminated downtown for a transition to a 10-mile run from downtown to finish in Wrightsville Beach Park.

All 99 original participants finished the race the only rule requiring helmets on the bike leg.

“There were no bike racks ” says Mincher. “Drafting (now prohibited) was fair game. We fended for ourselves on the road. We (even) changed clothes after each leg; granola fruit soft drinks and candy bars provided course nutrition.” Gels energy bars and “tri-suits” had not come to pass.

The course morphed several times before reaching its current much shorter form. While the swim was lengthened to 1 350 yards — longer than the standard “sprint” distance — the bike and run were shortened to 11.5 miles and 5 kilometers respectively. The race starts at the Blockade Runner with the swim and ultimately finishes the run in Wrightsville Beach Park. Both transitions take place in the park simplifying logistics significantly from prior courses.

“The normal swim distance for a sprint triathlon is around 750 meters but the (swim leg of the) Wrightsville Beach race is (longer). It’s scheduled to coincide with the incoming tide so swimmers enjoy a nice push from the current.”

“The long transition from the swim to bike extends from Sea Path Marina down the pier through a rough parking lot and across the street to Wrightsville Beach Park ” says Williams. “There are cheering spectators and dogs and you can spot your family and friends as you race through to your bike.”

Once on the bike athletes must ride single-file when negotiating the grated drawbridge both leaving and returning. Passing is not allowed on the bridge which can frustrate faster riders but safety is paramount.

“Some riders have fallen and had their legs turned into hamburger ” says Williams. “You cannot be too careful on that bridge.”

The run which traverses the popular Wrightsville Beach Loop is familiar to locals.

“It’s pancake-flat and has a nice long finish chute ” says Williams. “This is a wonderful spot for cheering families and friends.”

The race has seen ups and downs. Participation dropped sharply after it was canceled for Hurricanes Fran and Floyd in the late 1990s and it was shortened to the run only following Hurricane Florence. The shorter logistically friendlier course has however garnered increased enthusiasm and the 2018 race generated much-needed relief money for hurricane victims.

As the shank of summer draws near every year triathletes descend in droves on Wrightsville Beach to train for the race. “For some this race has become an annual family tradition ” says Mincher.

The weather is still warm making the race a good excuse to enjoy the beach one last time before winter.

“It’s a nice race ” says Williams. “It boasts large attendance from locals and traveling athletes.I recommend it because of the current-friendly open water swim.The course is flat and the Wrightsville Beach community is laid-back and welcoming.”

“All triathlons draw serious athletes but this race is friendly to everyone ” says Mincher. “It is the oldest triathlon on the East Coast and one of the oldest in the country.”

Triathlons are popular and North Carolina ranks third in the country in participation. Several races including the Half-Ironman event in November take place within or around Wilmington but the Wrightsville Beach Triathlon endures. It might no longer be the only show in town but it retains its popularity as a unique destination race and cherished local tradition.

Now directed by Tom Clifford owner of Without Limits and director of the Wilmington Marathon the race continues to thrive and is a must-do for many triathletes.

Sun Power: Cars of the Future

Graduates of the Mechanical Engineering Technology program at Cape Fear Community College aim to work in design development testing and repair of equipment in manufacturing fabrication research and development and service industries. In their fall 2018 and winter 2019 classes two groups of students tackled solar cars and solar design.

Funded with two grants students designed cars making a presentation at the end of the fall semester. “Then in the spring semester we started building ” says Daniel Hendrickson Mechanical Engineering Technology program director.

The dense foam cars built from scratch can travel at speeds of 20-25 mph and cost $5 000 to $6 000 to build. Two are on display at the school’s North Campus lobby and two are in the school’s lab.

The students had to have the car prototypes running for the parade and then ready to compete in the CFCC Solar Challenge event in May.

Appalachian State students were building a big solar car for one of the bigger events and suggested Cape Fear do likewise but cost was a deterrent.

“You need $250 000 to build one of those big competitive cars and I started thinking about why does it cost so much to compete? We figured out what was going on we figured out we could do a much-reduced cost version of this ” Hendrickson says.

Using commercially available solar panels the goal was to build car prototypes that would only run for three hours and be limited to 400 watts. “That was our biggest cost control ” says Hendrickson.

With grant applications in the works he says the program will try to produce two cars next year.

Ali Joy’s husband Austin drowned in June 2018 in a rip current at Atlantic Beach as he swam to save the couple’s twin daughters age 7. It was Father’s Day and the family from Richmond Virginia was on vacation. Both husband and wife rushed to rescue the girls as did four Marines and several surfers.

Ali says “As we all struggled in the surf waves breaking over our heads one Marine called to me ‘Float on your back!’ That is what gave me hope.”

She credits the U.S. Marine’s advice with buying the time needed for others to reach her with surfboards.

Ali is now on a mission to revolutionize how people go to the beach and has created a new rip current warning message about floating not fighting the current.

Have you ever noticed that rip short for rip current or riptide is also an age-old abbreviation for “rest in peace?”

Rip currents suck more than 100 people to their deaths every year in the U.S. Don’t go in the ocean a river or a lake unless you are prepared to deal with these invisible silent rivers.

Avoiding and surviving rip tides is usually quite simple but you have to be prepared.

Some things that made this situation life-threatening included the deception of the pretty sky and water inexperienced swimmers panic an outgoing tide no lifeguards and an untrained rescuer leaving his float ashore.

Despite calm-looking seas and beautiful sky even if the waves are small or flat rips can still be present.

Rips can occur in the ocean gulf along a river or even on a lake.

Most rip currents flow so fast that not even an Olympic swimmer can fight them.

Rips suck water out to sea and carry you with it.

When you go to the beach always take something that floats and keep it near your chair or blanket. You can play with it in the water — and you might need it for a rescue. Jumping into a rip current can actually be a good idea for a rescuer because it speeds him up and takes less energy to reach the drowning victim. But how are you going to save one two or even three people without a float?

Drowning is usually not loud nor easy to spot. You might wonder why someone would not wave hands or scream for help if drowning.The answer is simple though not so obvious.

Imagine if you were drowning. You would be scared panicked and exhausted.You would be using every ounce of energy to keep your head above water as you kick your feet and wave your hands — under the water!This is called treading water or dog-paddling.

Incoming tides may slow down a rip and make them harder to notice.

Let a tide change alert you to changing conditions.

Use the flip-flop alert to inspect the water’s edge.

Is everybody still safe?

Are the kids splashing nearby?

Did the incoming tide make the water deeper?

Raleigh-based blogger Clark Anderson’s survival suggestions are not information based on scientific research or approved by any official organization or this publication. They are based on his 50 years of personal water experience and intended solely to raise awareness of rip currents. Read the story of a rescue he was involved in on North Carolina’s Outer Banks: https://www.ncsupplement.com/blog/give-a-rip-don-t-drown-in-one