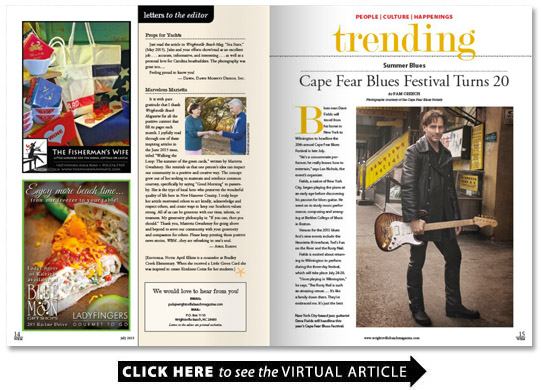 Blues man Dave Fields will travel from his home in New York to Wilmington to headline the 20th annual Cape Fear Blues Festival in late July.

“He’s a consummate performer; he really knows how to entertain ” says Lan Nichols the event’s organizer.

Fields a native of New York City began playing the piano at an early age before discovering his passion for blues guitar. He went on to study music performance composing and arranging at Berklee College of Music in Boston.

Venues for the 2015 blues fest’s nine events include the Henrietta III riverboat Ted’s Fun on the River and the Rusty Nail.

Fields is excited about returning to Wilmington to perform during the three-day festival which will take place July 24-26.

“I love playing in Wilmington ” he says. “The Rusty Nail is such an amazing venue. ? It’s like a family down there. They’ve embraced me. It’s just the best feeling for an artist — to be loved. I get choked up when I think about it. Being a musician in New York City can be tough.”

Fields’ set list includes his original songs such as “Ain’t No Crime ” “Lydia” and “Train to My Heart.” He will also cover songs by Led Zeppelin and Jimi Hendrix.

Drummer Lee Venters and bassist Richard Kern — both from Wilmington — will accompany Fields during his Rusty Nail performance.

“I love them. I feel so lucky to play with those guys ” Fields says.

Nichols also feels lucky due to the blues festival’s success.

“It could not have been successful for 20 years without a lot of volunteers participation from media and listeners ” he said. “We’re grateful.”

“We try to avoid simultaneous performances. We try to make it accessible to everybody so everybody can make every show ” Nichols says.

Art for the Classes

Colorfully painted vintage school desks line the walls of the art classroom at Gregory Elementary School. Although it appears as such these chairs recently featured in an art festival weren’t painted by professionals. The artists were Gregory’s students.

James McDonough the students’ art teacher was impressed by their work.

“Having had most of them since kindergarten I knew they’d be able to handle a project like this ” he says. “They worked on the chairs for four months.”

McDonough encouraged his students to plan their designs before they started painting.

“I wanted them to choose a color scheme. We talked about monochromatic color schemes ” he says.

“The idea was to keep it simple. ? I encouraged them to use simple lines shapes and patterns to avoid over- complicating it ” he says.

The students worked in groups of three or four and each group could use up to three colors.

“I wanted them to all have different colors so they didn’t all come out green or something ” McDonough says.

Devin Pellom and his group chose red white and blue.

“We painted a red-and-white diamond in the middle ” he says. “The blue is on the legs.”

Pellom’s classmate Lucy Yeates and her group went with a more natural motif for their chair.

“It is yellow and has red flowers ” she says. “We wanted to do something with nature. ? We all liked floral print.”

Noel Goodman and her group painted peace signs on their chair.

“The base color is pink ” she says. “We used yellow but it kind of turned into orange because of the pink.”

Goodman also painted stars on the back of her chair.

“The main thing we did was have fun ” she says.

Goodman wants to continue painting in her spare time. She says her next project will be a sea turtle.

“I want all my paintings to have meaning ” she says.

Yeates wants to paint a mural one day.

“I would do places I’ve been or things I like and when you step back it would show a picture of somebody ” she says.

The proceeds from this year’s projects helped fund the students’ field day.

“Eighteen chairs sold for $5 each. Some people donated a bit more ” says McDonough. The sale that took place at the Community Arts Center during the Orange Street Arts Festival raised $170 to go toward an inflatable waterslide.

McDonough hopes future sales will be just as successful.

“We have enough desks to do this with the fifth- graders again next year. We talked about incorporating more furniture with donations ” he says.