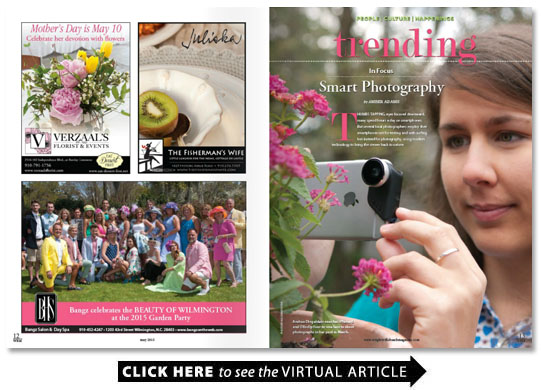 Thumbs tapping eyes focused downward many spend hours a day on smartphones. But several local photographers employ their smartphones not for texting and web surfing but instead for photography using modern technology to bring the viewer back to nature.

Andrea Dingeldein from Burlington NC began photography as a youngster under her father’s lead.

“My family would go scuba diving and we took pictures underwater ” Dingeldein says.

She was most familiar with Nikon equipment before transitioning to her iPhone. To accompany her iPhone she uses a two-lens Olloclip to shoot macro photography.

“The Olloclip is a great tool. It’s affordable enough to get a new model to play around with ” she says.

Other than the Camera Plus application she shoots raw images with very little post processing. She uses Instagram application filters to adjust the brightness contrast and saturation of the original iPhone image and posts her photos to the widely used Instagram app.

Dingeldein holds degrees in marine biology and graphic design from the University of North Carolina Wilmington. This combined interest in science and art led her to explore her subject of choice: insects.

“Insects take me back to my childhood ” she says.

Dingeldein has traveled to the Virgin Islands and Hawaii to capture underwater wildlife and nature but finds the most fascinating subjects in her own yard.

She recently published a book of iPhone images taken during a two-year period featuring a variety of small insect species that occupy her Wilmington backyard in the spring and summer months.

Her favorite image is the longlegged fly — at roughly one-fourth of an inch long — because it was the most difficult shot to get she says. The longlegged fly is. Although there are many of them naturally they quickly fly away.

Through her iPhone photography Dingeldein says she wants to show with modern technology how kids and adults can go outside and learn about the small natural world around them. By photographing insects Dingeldein holds a magnifying glass to the small stuff in nature.

“There are tiny details of the insects that you would normally gloss over with your eyes ” she says.

“I always loved photography but I didn’t like to carry around equipment ” she says.

Hill spent part of her modeling career working with photographers from around the world. In 2008 she began sharing iPhone photos on Facebook and shortly after landed her first show at the New Hanover County Arboretum.

A series of photos “Life After Death ” which show petals of a dried sunflower Hill placed upon a glass table and shot on an iPhone was a winner during the International Photography Awards. The petals appear to be caught in the wind or in motion when actually they are still. “Life After Death” resonates with emotion for Hill. Always inspired in the moment and using subjects plucked from nature Hill’s photos offer a minimalist clean and simple composition usually showing one object.

“If I plan to take a picture it doesn’t happen. … It has to be natural ” she says.

Her work as a photographer began with capturing vibrant colorful images and evolved to shooting monochromatic black-and-white images.

She used a Nikon optic with its twist body arms in the up position to take photos and capture images from under things. Her iPhone 3GS work is printed as a 40 by 40 image on aluminum. Aluminum provides a product 100 times the archival quality of standard paper.

“I tried paper and canvas but the colored prints on metal served a high-definition image ” Hill says.

The prints have a matte finish on aluminum that allows images to show through for an industrial edgy tone.

She uses the Hipstamatic application for fine art shots choosing any combination of lens filter and flash. Hipstamatic allows the photographer to choose a frame and add special effects to an image.

Hill explains “What’s challenging about it is you can’t do any after edits. You have to prepare for the finished product that you want. In typical photography you can go back and edit.”

One of the biggest reasons Hill is drawn to iPhone photography is because she has no patience she says. The instant gratification factor of taking out the iPhone at a moment’s notice is artistically convenient.

“Photography shows the things that I see and I feel people miss ” Hill says.

Now Gearhart says “Your initial failures won’t stay with you forever and you can overcome them.”

He attended Indiana Westland University in Marion Indiana graduating with a degree in mass media communications.

In his professional photography work Gearhart uses a Canon T1I DSLR with a standard lens 18-55 mm and moved from film to digital. In 2009 he began iPhone photography and now uses a GoPro camera and an iPhone 5S for shooting and editing.

“Ankle High” is a singular iPhone work in which a sunset starkly distant rainbow and clean waves frame a man on his surfboard. Gearhart had his GoPro camera mounted to the front of his surfboard and turned to face his subject.

The Snapfeed application is among his most used iPhone photo editing programs.

“The iPhone editing allows a different perspective on everyday things ” he says.

Changing the perspective and angles not ordinarily seen highlights particular parts of the photograph. Gearhart’s prints are mounted to metal to enhance the image.

“Quarter to Sunset” was captured on his iPhone along a dock on the Shallotte River. It is mounted on a wooden frame representing the wooden dock on which he stood to take the photo.

Gearhart says he uses a GorillaPod or a monopod to shoot places that one can’t get on a normal tripod. He shoots expansive landscapes natural surroundings and wildlife using natural lighting. He says he lets the phone do the work; the apps on his iPhone allow a longer exposure.

Light painting technique a part of Gearhart’s process is achieved when a subject has no or limited light and an external light source like a flashlight can paint the subject being photographed.

“If you give a cheap guitar to Eric Clapton he’s still going to play unbelievably ” Gearhart says. “While technology helps I think having a photographic eye and an understanding of photography techniques is more important than the equipment.”

Jo Ann Tomaselli graduated with a degree in photography and writing from Stockton College in Pomona New Jersey in 1980. She was most influenced by her college mentor professor and landscape photographer Joel Sternfeld. She saw how he used the natural world to bring emotional connection to fruition in his photographs.

Tomaselli uses a Canon 5D Mark 2 with a variety of Pro Series lenses and also began shooting with a Samsung Galaxy S4 smartphone four years ago. Tomaselli travels and photographs all over the world and still considers her backyard the best place to shoot.

“Away is good but home is best ” she says.

Tomaselli photographs the sky in her Hampstead backyard with nature at her doorstep. Her online Instagram Gallery Same View-Different Day displays hundreds of photos of the sky from her backyard. The sunrises are low-light images shot on a tripod with a Stingray filter.

“I love digital photography. It’s a fantastic way to play and be affordable ” she explains.

A member of the Cape Fear Camera Club Tomaselli talks to other photographers and believes the best way to get better photos is going outside and into the experience.

“It is like digging in the dirt. … You have to go out and play ” she says.

“Slip Slidin'” is an early morning blue hour sliver of moon in the sky with long exposure.

Tomaselli says “If I could pick one place to photograph I guess I choose to go to the moon.”

Tomaselli thinks photography should be fun and chooses not to get caught up in the kind of gear used.

“I think the best camera is the one you have with you. Record what you see ” she says.