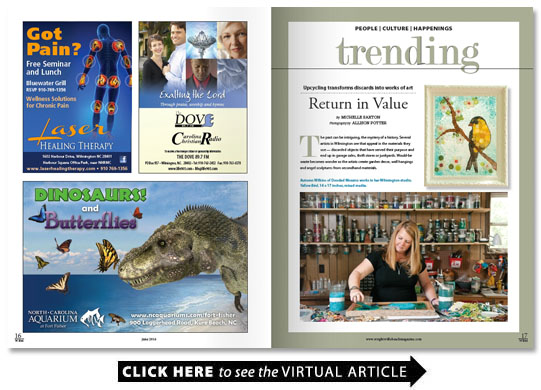 The past can be intriguing the mystery of a history. Several artists in Wilmington see that appeal in the materials they use — discarded objects that have served their purpose and end up in garage sales thrift stores or junkyards. Would-be waste becomes wonder as the artists create garden decor wall hangings and angel sculptures from secondhand materials.

For years Autumn Wilkins has collected items she finds — buttons beads and other doodads. She keeps them sorted in her Wilmington studio by theme and color in organized Mason jars and an old apothecary-style chest with little drawers.

“There’s beauty in everything ” Wilkins says. “Even the simplest little piece of junk to somebody else might be something really beautiful to another person. And so I like taking these things that people are throwing away and putting them in designs that people find amazing.”

“I love the outdoors ” Wilkins says. “That’s just what I’m drawn to.”

She also created a piece for an ocean plastic-themed exhibit at Expo 216 in downtown Wilmington.

Besides buttons and beads her doodads also include broken jewelry and glass and old vases.

“If I see something on the side of the road that people are just throwing out I’ll stop and pick it up ” Wilkins says adding she uses found windows to frame her art.

Wilkins was inspired by a friend in Washington D.C. who used resin to make jewelry. Wilkins took some of her doodads made a design in a window and poured on resin to see how it would work. She eventually refined her craft into a stained glass-like finish.

Variety in materials is important Wilkins says adding she wants people to see something different every time they look at an art piece such as a button with a special design carved in it.

“That’s one of the things I try to achieve with my art just finding things that seem so ordinary by themselves but in a composition they make sense ” Wilkins says.

Kim Papanicolaou designs angels with a “soul” from architectural salvage metal and other found objects. Her art Soul Pickets comes from a need to create.

“Often I work out my own problems through my angels ” she says.

Papanicolaou a former gift shop buyer who works at a kitchen and lighting company in Jacksonville North Carolina writes stories for the angels inspired by what is happening in her life or the world at the time.

Challenges have included losing her hearing and becoming a caretaker for her father in his declining health. She also created an education-themed angel with tickets and keys while thinking about her daughter in college.

“I was getting out a lot of what was happening to me through the stories ” Papanicolaou says. “But they were always positive … coming into your own finding yourself or staying with it.”

Papanicolaou also makes memorial angels creating her own interpretation from listening to people talk about loved ones they lost.

She started making her angels in late 2014 but her affinity for upcycling started long before then.

“I’ve grown up in a world of repurposing and recycling ” Papanicolaou says.

Her father Douglas Moore is a former cabinet builder from Wilson North Carolina who did repurposing work starting in the 1970s building restaurants out of materials from old houses he would tear down and reuse. He also had a salvage business.

“My father is the greatest influence in my life ” says Papanicolaou whose nickname growing up was Little Doug. “It’s like I’m coming full circle for him.”

Everything that is old has a story says Papanicolaou who visits junkyards estate sales and thrift stores for materials. She takes apart lamps and will buy a whole chair to salvage one decorative piece.

“You’re tossing something that is perfectly good and it has a story ” she says. “But when it’s something that’s tossed that can’t be reworked into what it was before that’s where the art and intrigue comes for me. I love junkyards and I love rust.”

The Thrill of the Find

“There’s nothing I love more than pulling over to the side of the road because somebody has thrown something away and I think I could do something with it ” says Bonnie Gaynor a retired social worker from Wilmington.

Gaynor and her husband John a retired high school teacher make art from recycled wood glass metal and other materials. Their work called reARTcycle includes wind chimes made from teapots wine bottles and spoons; humorous cats and dogs made from old fences; and garden sculpture “birdies” made from golf clubs.

“We have 12 months of something blooming down here in Wilmington ” Gaynor says. “Lots of the stuff we make is focused on putting it in your yard.”

“I try to find out-of-the-way places where stuff isn’t fancy where you might have to go through cobwebs to find some spoons ” Gaynor says. “It’s the thrill of the find.”

Gaynor purchases some craft items including wire and screws to connect pieces but she focuses mainly on recycling used found and saved materials such as potato mashers whisks and bottle caps. John Gaynor’s balancing sculptures include pieces of metal integrated with used rebar.

In addition to the challenge of creating something new with old materials Gaynor also appreciates the green aspects of upcycling.

“Sometimes when people look at our stuff I’ll say ‘It’s one less bottle or one less whatever in the landfill ‘” Gaynor says. “Hopefully sometimes people walk through our booth and look at our stuff and think a little harder about what they’re throwing away and what they could donate to Goodwill or Habitat for Humanity.”

Gaynor also gets requests to create art that incorporates specific items passed down from customers’ relatives.

“Rather than have a piece sitting in your china closet getting all tarnished you can actually enjoy it every day and think of your family member ” she says.