Trending: Leave Your Car Behind 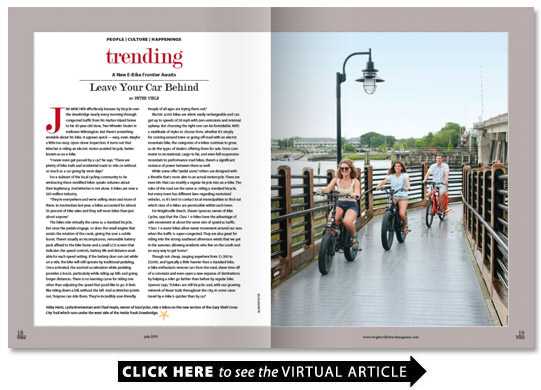 Leave Your Car Behind

Jim Mincher effortlessly breezes by bicycle over the drawbridge nearly every morning through congested traffic from his Harbor Island home to his 45-year-old store Two Wheeler Dealer in midtown Wilmington. But there’s something enviable about his bike. It appears quick — easy even. Maybe a little too easy. Upon closer inspection it turns out that Mincher is riding an electric motor-assisted bicycle better known as an e-bike.

“I never even get passed by a car ” he says. “There are plenty of bike trails and residential roads to ride on without so much as a car going by most days.”

For a stalwart of the local cycling community to be embracing these modified bikes speaks volumes about their legitimacy. And Mincher is not alone. E-bikes are now a $65-million industry.

“They’re everywhere and we’re selling more and more of them. In Amsterdam last year e-bikes accounted for almost 50 percent of bike sales and they sell more bikes than just about anyone.”

The bikes ride virtually the same as a standard bicycle but once the pedals engage so does the small engine that assists the rotation of the crank giving the user a subtle boost. There’s usually an inconspicuous removable battery pack affixed to the bike frame and a small LCD screen that indicates the speed controls battery life and distance available for each speed setting. If the battery does run out while on a ride the bike will still operate by traditional pedaling. Once activated the assisted acceleration while pedaling provides a boost particularly while riding up hills and going longer distances. There is no learning curve for riding one other than adjusting the speed that you’d like to go. It feels like riding down a hill without the hill. And as Mincher points out “Anyone can ride them. They’re incredibly user-friendly. People of all ages are trying them out.”

Electric assist bikes are silent easily rechargeable and can get up to speeds of 28 mph with zero emissions and minimal upkeep. But choosing the right one can be formidable. With a multitude of styles to choose from whether it’s simply for cruising around town or going off-road with an electric mountain bike the categories of e-bikes continue to grow as do the types of dealers offering them for sale. From commuter to recreational cargo to fat and even full-suspension mountain to performance road bikes there’s a significant variance of power between them as well.

While some offer “pedal assist ” others are designed with a throttle that’s more akin to an actual motorcycle. There are even kits that can modify a regular bicycle into an e-bike. The rules of the road are the same as riding a standard bicycle but every town has different laws regarding motorized vehicles so it’s best to contact local municipalities to find out which class of e-bikes are permissible within each town.

For Wrightsville Beach Shawn Spencer owner of Bike Cycles says that the Class 1 e-bikes have the advantage of safe movement at about the same rate of speed as traffic. “Class 1 e-assist bikes allow easier movement around our area when the traffic is super-congested. They are also great for riding into the strong southeast afternoon winds that we get in the summer allowing residents who live on the south end an easy way to get home.”

Though not cheap ranging anywhere from $1 500 to $5 000 and typically a little heavier than a standard bike e-bike enthusiasts remove cars from the road shave time off of a commute and even open a new expanse of destinations by helping a rider go farther than before by regular bike. Spencer says “E-bikes are still bicycles and with our growing network of linear trails throughout the city in some cases travel by e-bike is quicker than by car.”

The Oceanic reopens to rave reviews

A New Lease of Life

Life on Wrightsville Beach has edged closer to normal yet some are still dealing with the damage from this past September’s Hurricane Florence.

Oceanic Restaurant at Crystal Pier sustained major water damage that required taking the interior down to the studs but the business turned the setback into a positive renovating to create a whole new look and more open floor plan with greater views of the ocean and strand.

“It was a total loss. There was no way they were going (to quickly reopen). There was a hole in the roof; the rain came in and came in. They tried to salvage things but they couldn’t ” says Nicole Massimino-Cook interior designer for the renovation.

The restaurant was closed for more than six months.

“It was the shortest fastest renovation in my life ” she says.

“The family sat down and we discussed it. They could have just put back what they had but they didn’t ” says L&M Restaurants director of operations Shang Skipper. L&M is the operator of Oceanic Restaurant.

The end result is a spectacular all-new Oceanic.

“The biggest design features the flow of the whole restaurant changed. Our biggest goal was to capture the views and retain the historic aspect ” says Massimino-Cook.

The restaurant reopened April 1 2019 to diners on the first floor and on the pier. The second and third floor soon followed. Massimino-Cook was personally hanging the last of the art and artifacts in early June.

The first thing a guest notices is the relocation of the stairs to the southern wall making the most of the one-of-a-kind views.

It’s not just the building that has been renovated. The menu has changed as well with a locally sourced whole fish program and made-from-scratch recipes. “We have adopted a commitment to the whole experience including the hospitality piece ” says Oceanic manager Jason Ivady.