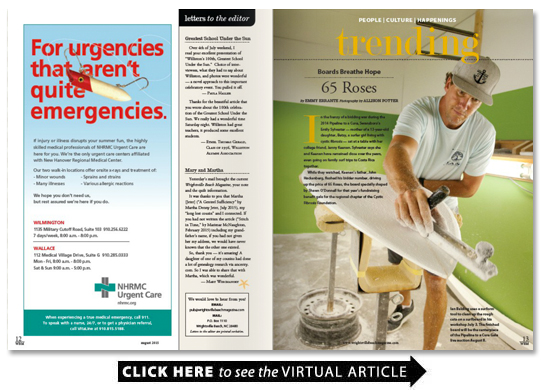 In the frenzy of a bidding war during the 2014 Pipeline to a Cure Swansboro’s Emily Sylvester — mother of a 13-year-old daughter Betsy a surfer girl living with cystic fibrosis — sat at a table with her college friend Jenny Keenan. Sylvester says she and Keenan have remained close over the years even going on family surf trips to Costa Rica together.

While they watched Keenan’s father John Hackenberg flashed his bidder number driving up the price of 65 Roses the board specially shaped by Shawn O’Donnell for that year’s fundraising benefit gala for the regional chapter of the Cystic Fibrosis Foundation.

At first Emily Sylvester thought Hackenberg was just trying to drive up the bid but then she realized he was trying to get the surfboard — for Betsy.

Sylvester says Hackenberg was likely inspired by a video screened earlier that night featuring parents including her speaking about the realities of raising a child who is living with CF.

At the auction’s height Hackenberg’s persistence prevailed; he cast the final bid: appropriately $6 500.

Susan Wasserman Pipeline to a Cure East co-chair is the mother of a teenage daughter who also lives with CF. She retells the 65 Roses story that began in 1965 when a Florida mother Mary G. Weiss began to raise funds for cystic fibrosis research when all three of her young sons were diagnosed. Both Weiss and her husband were carriers of the CF gene a perfect match for the life-threatening disorder that damages the respiratory and digestive systems. She began volunteering for the Cystic Fibrosis Foundation spending hour after hour on the phone to raise money.

One day her 4-year-old son Richard approached her saying “Mommy I know what you’re fundraising for.”

Weiss was afraid to hear what her little boy might have overheard her say about the disease but she asked him “What am I raising money for?”

The phrase caught on as other tiny children diagnosed with cystic fibrosis struggled to pronounce the name of the disease.

Now for the fourth year the piece de resistance of Wasserman’s Pipeline to a Cure East auction is a 65 Roses surfboard. A board concept was chosen to bear the 65 Roses theme to highlight the connection between surfing and CF. Recently doctors in Australia observed CF patients who surfed had better lung function than those who did not. Inhaling the salt laden air helped clear their lungs of mucus doctors realized. The discovery inspired the development of a hypertonic saline drug now used by CF patients worldwide.

Two boards shaped by Greg Eavey well-known surfboard maker renowned for creating artful boards were auctioned in 2012 and 2013. Shawn O’Donnell fellow surfboard craftsman took over the task of creating the surfboard in 2014.

During that year’s auction another local surfboard shaper Ian Balding was in the audience. Balding began to imagine ways in which he would interpret the 65 Roses theme and since several of his friends’ children are affected by CF the prospect of raising such a large sum of money to fight the disease further inspired him.

He asked O’Donnell for the opportunity to design the 2015 board and O’Donnell agreed.

Wasserman says the generosity of the region’s most talented surfboard shapers as well as the shapers’ willingness to share the honor of designing the board is just one example of the united community resolve to someday eradicate the disease.

“Sixty-five Roses is the symbol for cystic fibrosis ” Wasserman says “but what it also means is mothers and fathers and friends and family and community all coming together so we can make CF stand for cure found.”