BY By Bradley A. Huebner 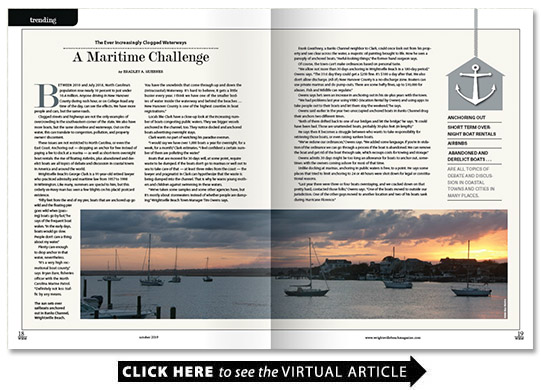 Between 2010 and July 2018 North Carolina’s population rose nearly 10 percent to just under 10.4 million. Anyone driving in New Hanover County during rush hour or on College Road any time of the day can see the effects. We have more people and cars but the same roads.

Clogged streets and highways are not the only examples of overcrowding in the southeastern corner of the state.We also have more boats but the same shoreline and waterways. Out on the water this can translate to congestion pollution and property owners’ discontent.

These issues are not restricted to North Carolina or even the East Coast. Anchoring out — dropping an anchor for free instead of paying a fee to dock at a marina — as well as short-term overnight boat rentals: the rise of floating Airbnbs plus abandoned and derelict boats are all topics of debate and discussion in coastal towns in America and around the world.

Wrightsville Beach’s George Clark is a 91-year-old retired lawyer who practiced admiralty and maritime law from 1957 to 1998 in Wilmington. Like many summers are special to him but this orderly ex-Navy man has seen a few blights on his placid postcard existence.

“Fifty feet from the end of my pier boats that are anchored up go wild and the floating pier goes wild when [passing] boats go by fast ” he says of the frequent boat wakes. “In the early days boats would go slow. People don’t care a thing about my water.”

Plenty care enough to drop anchor in that water nevertheless.

“It’s a very high recreational boat county ” says Bryan Eure fisheries officer with the North Carolina Marine Patrol. “Definitely not less traffic by any means. You have the snowbirds that come through up and down the (Intracoastal) Waterway. It’s hard to believe; it gets a little busier every year. I think we have one of the smaller bodies of water inside the waterway and behind the beaches … New Hanover County is one of the highest counties in boat registrations.”

Locals like Clark have a close-up look at the increasing number of boats congesting public waters. They see bigger vessels anchored in the channel too. They notice docked and anchored boats advertising overnight stays.

Clark wants no part of watching his paradise overrun.

“I would say we have over 1 000 boats a year for overnight for a week for a month ” Clark estimates. “I feel confident a certain number of them are polluting the water.”

Boats that are moored for 30 days will at some point require waste to be dumped. If the boats don’t go to marinas or well out to sea to take care of that — at least three miles from the coast — the lawyer and pragmatist in Clark can hypothesize that the waste is being dumped into the channel. That is why he warns young mothers and children against swimming in these waters.

“We’ve taken some samples and some other agencies have but it’s mostly about stormwaters instead of whether people are dumping ” Wrightsville Beach Town Manager Tim Owens says.

Frank Gwathney a Banks Channel neighbor to Clark could once look out from his property and see clear across the water a majestic oil painting brought to life. Now he sees a panoply of anchored boats. “Awful-looking things ” the former hand surgeon says.

Of course the town can’t make ordinances based on personal taste.

“We allow not more than 30 days anchoring in Wrightsville Beach in a 180-day period ” Owens says. “The 31st day they could get a $250 fine. It’s $100 a day after that. We also don’t allow discharge. (All of) New Hanover County is a no-discharge zone. Boaters can use private marinas and do pump-outs. There are some hefty fines up to $10 000 for abuses. Fish and Wildlife can regulate.”

Owens says he’s seen an increase in anchoring out in his six-plus years with the town.

“We had problems last year using VRBO (Vacation Rental by Owner) and using apps to take people out to their boats and let them stay the weekend ” he says.

“Both of them drifted back to one of our bridges and hit the bridge ” he says. “It could have been bad. Those are unattended boats probably 30-plus feet (in length).”

He says then it becomes a struggle between who wants to take responsibility for retrieving those boats or even raising sunken boats.

“We’ve redone our ordinances ” Owens says. “We added some language. If you’re in violation of the ordinance we can go through a process if the boat is abandoned. We can remove the boat and get rid of the boat through sale which recoups costs for towing and storage.”

Owens admits 30 days might be too long an allowance for boats to anchor out sometimes with the owners coming ashore for most of that time.

Unlike docking at marinas anchoring in public waters is free to a point. He says some places that tried to limit anchoring to 24 or 48 hours were shot down for legal or constitutional reasons.

“Last year there were three or four boats overstaying and we cracked down on that pretty hard contacted those folks ” Owens says. “One of the boats moved to outside our jurisdiction. One of the other guys moved to another location and two of his boats sank during Hurricane Florence.”

Areas of Florida and the Caribbean commonly have mooring fields but those on the U.S. East Coast are disappearing.

Wrightsville Beach does not allow private mooring balls although the Carolina Yacht Club has maintained at least one or two in Banks Channel for decades.The Carolina Beach mooring field offers nine white mooring balls with a blue stripe in the middle for $20 per night in Myrtle Grove Sound for boat lengths between 26 to 55 feet having no more than a 14-foot draft. It is located south of Snows Cut between markers #4 and #5 on the approach channel into the Carolina Beach town waterfront.

A spokesperson for Charleston’s City Marina says all mooring balls in the Ashley River are now privately owned. Beaufort North Carolina once had mooring balls inside the corporate town limits but they were deemed illegal and were removed a town hall representative says. Beaufort limits anchoring in Taylor and Town creeks to 10 cumulative days anywhere inside the town’s corporate limits. After that boats are fined police Lt. D. Garner says. The term limits are cumulative in any location not just consecutive. The town has a police boat and keeps track of what boats are where and checks on them once or twice a week. After day 10 officers zip-tie a tag to the boat. Then after going through a process the fines are $500 per day.

Merely leaving it up to people to respect the rights of others to operate in public waters won’t work going forward as well as it did decades ago.

Owens has increased enforcement and created pamphlets to hand out to boaters. The town has posted two signs by the public docks at Wynn Plaza. The next step he suggests might be installing cameras.

He’s heard the locals call for action and understands that some complaints are justified.

“I find it hard to believe that somebody hasn’t [illegally] discharged ” Owens says. “It could be a serious $10 000 federal fine [if they get caught].”

Airbnb boat rentals at docks and anchored out on the Cape Fear River Carolina Beach and Wrightsville Beach can be found advertised on national sites.

Homeowners like Clark do not want to see North Carolina turn into an East Coast version of San Francisco. The Wall Street Journal published an article May 16 2019 entitled “Home Prices Leads Some to the Water” that detailed how many homeless people in San Francisco and Marin County just north of the city are living on unsafe boats that substitute as makeshift houseboats.

“The ragtag collection of some 200 barges sailboats and other mostly decrepit boats in which they live and store their belongings is a sign of an affordable-housing crisis in California that is being felt particularly acutely in the San Francisco Bay Area ” the article states.

Clark sees enough signs off Wrightsville Beach to act now before his paradise gets overrun. Like those in North Carolina boats anchored or moored in waters all around the country have broken loose in storms endangering anyone within a short paddle.

“A lot of people buy cheap boats and beat-up boats and anchor them off the coast of San Francisco ” Clark says. “The same thing can happen here.”

Pat Bradford contributed to this story.