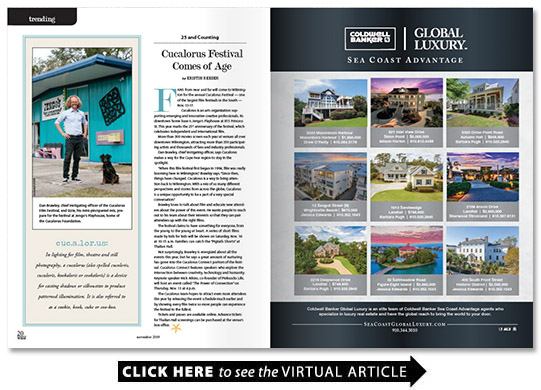 In lighting for film theatre and still photography a cucalorus (also spelled cucoloris cuculoris kookaloris or cookaloris) is a device for casting shadows or silhouettes to produce patterned illumination. It is also referred to as a cookie kook cuke or coo-koo.

Fans from near and far will come to Wilming-ton for the annual Cucalorus Festival — one of the largest film festivals in the South — Nov. 13-17.

Cucalorus is an arts organization supporting emerging and innovative creative professionals.Its downtown home base is Jengo’s Playhouse at 815 Princess St. This year marks the 25th anniversary of the festival which celebrates independent and international film.

More than 300 movies screen each year at venues all over downtown Wilmington attracting more than 350 participating artists and thousands of fans and industry professionals.

Dan Brawley chief instigating officer says Cucalorus makes a way for the Cape Fear region to stay in the spotlight.

“When this film festival first began in 1994 film was really booming here in Wilmington ” Brawley says. “Since then things have changed. Cucalorus is a way to bring attention back to Wilmington. With a mix of so many different perspectives and stories from across the globe Cucalorus is a unique opportunity to be a part of a very special conversation.”

Brawley loves to talk about film and educate new attendees about the power of this event. He wants people to reach out to his team about their interests so that they can pair attendees up with the right films.

The festival claims to have something for everyone from the young to the young at heart. A series of short films made by kids for kids will be shown on Saturday Nov. 16 at 10:15 a.m. Families can catch the “Pigtails Shorts” at Thalian Hall.

Not surprisingly Brawley is energized about all the events this year but he says a great amount of nurturing has gone into the Cucalorus Connect portion of the festival. Cucalorus Connect features speakers who explore the intersection between creativity technology and humanity. Keynote speaker Nick Atkins co-founder of Pinksocks Life will host an event called “The Power of Connection” on Thursday Nov. 13 at 4 p.m.

The Cucalorus team hopes to attract even more attendees this year by releasing the event schedule much earlier and by showing every film twice so more people can experience the festival to the fullest.

Tickets and passes are available online. Advance tickets for Thalian Hall screenings can be purchased at the venue’s box office.