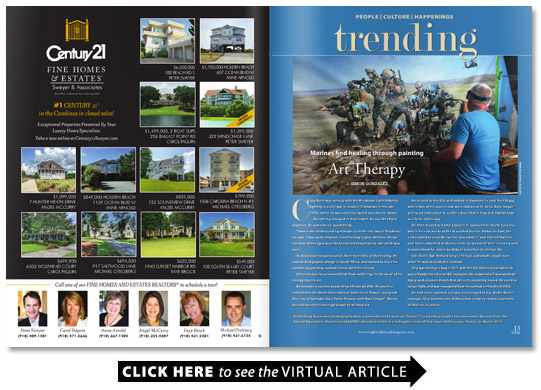 Craig Bone was serving with the Rhodesian Light Infantry fighting in a civil war in modern Zimbabwe in the late 1970s when he was severely injured by a mortar attack.

Everything changed in that instant. He couldn’t fight anymore. Or compete on sports fields.

“I was in the military and I got blown up in the civil war in Rhodesia ” he says. “I was quite physical. I used to play rugby athletics things like that. When I got wounded I realized that physical side of life was over.”

As depression began to set in Bone turned to art for healing. He had studied graphic design in South Africa and started to hone his abilities by painting combat scenes while he served.

When his injuries prevented him from soldiering he threw all of his energy into his art.

He became a success at painting African wildlife. His work is exhibited in the Harte International Galleries in Hawaii alongside the likes of Salvador Dali Pablo Picasso and Marc Chagall. But he found himself increasingly drawn to military art.

He moved to the U.S. and settled in Fayetteville near Fort Bragg where two of his sons-in-law were stationed. In 2010 Bone began giving art instruction to soldiers wounded in Iraq and Afghanistan as a form of therapy.

He then moved to Camp Lejeune in Jacksonville North Carolina where he now works at the Wounded Warrior Battalion-East the unit created to provide care for wounded ill and injured Marines and sailors attached to Marine units to maximize their recovery and prepare them for return to duty or transition to civilian life.

Like Bone Sgt. Richard Ung’s life took a dramatic tragic turn when he was wounded in combat.

Ung was serving in Iraq in 2011 with the U.S. Marine Corps when he was critically injured in an IED explosion. He sustained a Traumatic Brain Injury and a broken thumb that still isn’t completely healed. He could no longer fight and was reassigned from his combat unit to the WWB-E.

He had never painted but was encouraged to try. Under Bone’s tutelage Ung became one of the artists creating realistic portraits of Marines in action.

“It’s something that Craig brought out of me ” Ung says. “He said I’m a better outliner than he is.”

The WWB-E Marines not only paint they also participate in reenactments. Bone uses tactical vehicles equipment and uniformed troops as models. After cleaning off the makeup and dropping the weapons the Marines take up brushes.

They create large murals depicting combat scenes such as battles in Fallujah Iraq and also tragedies like the helicopter accident that claimed the lives of six Marines who were delivering humanitarian aid to victims of the catastrophic earthquake in Nepal.

The originals are donated and sold during fundraisers for charities that support either the Marine Corps or surviving family members of those killed in action.

Reliving the horrors of combat and painting for a good cause is proving cathartic for the Marine artists.

“They are recording history and giving back to their country ” Bone says. “They are feeling useful again which is the main thing.”

A Legacy of Generosity

A single tear rolls down George Rountree’s face as he tells the story. The memory is as fresh now is it was the day it happened more than 40 years ago.

It was a July evening in 1973. Rountree was serving in the North Carolina State Senate. After a long exhausting session in Raleigh debating how much money to allocate to education he made the pre I-40 drive back to Wilmington. It was about 7 p.m. when he pulled into town and stopped to fill up his gas tank.

“I went inside to buy a bottle of Orange Crush ” he says. “I opened up my trunk and put the Orange Crush in a cup with some vodka. The next morning I got a call from a woman. She said ‘Mr. Rountree I want you to know how big an impact that made on my son. He just thought you hung the moon. He saw you do that and it totally destroyed him.'”

Rountree could make excuses. Alcohol laws at the time encouraged patrons to have their own bottles in a brown bag if they wanted a drink at a restaurant. He didn’t drink to excess. He wouldn’t be driving while impaired. But instead he owned up.

“I said [to the woman] you are absolutely correct ” he says. “It was a horrible thing for me to do. I certainly wish I hadn’t done it. Humility is a part of life. But I’ll never forget that. And I never did that again. Ever.”

Native son George Rountree III is a highly respected attorney the senior partner in Rountree Losee LLP a law firm with an impeccable reputation and 110-year-old roots in the community. He was an all-conference basketball player at the University of Arizona and is known for his support of basketball programs at his alma mater the University of North Carolina Wilmington and at the city’s four public high schools.

His on-court career and off-court involvement were recognized in May when Rountree received the first lifetime achievement award from the Greater Wilmington Sports Hall of Fame.

But there’s a less public side to the 82-year-old that arguably has a greater impact a rare spirit of giving that is impacting untold lives and leaving a legacy of generosity.

Rountree and his wife Sylvia are involved in a variety of causes from providing drugs for cancer patients to contributing to hospice care and cancer research to endowing scholarships for law students to donating equipment and supplies to local schools. They give to Communities In Schools the Miracle League of Wilmington the Brigade Boys & Girls Club and Kids Making It.

Rountree gives to help others because he recognizes the help he has received over the course of his life.

“I think that a lawyer has an obligation to the community in which he lives to give back ” he says. “Of those who have much much is expected. That’s biblical and I learned it from my mother. There’s no such thing as a self-made man. Along the way there were significant forces that helped mold you into what you are today. Giving back is one of the ways of showing that you understand that.”

Rountree’s involvement in the community goes far beyond writing checks. He sees himself as a mentor and a role model and someone who can equip other role models for the purpose of helping youth. It is a facet of his personality that is fueled in large part by the memory of that summer evening in 1973 when it was driven home that as someone in the public eye he has a responsibility to use his influence to the benefit of others.

Rountree who overcame a pronounced stutter as a young man now speaks at schools and to groups of young people every chance he gets to dispense the wisdom acquired over the years.

He warns young people about “the three legs on which the stool of failure rests: I’m entitled to it; because I’m entitled to it I want it now I want instant gratification; and if anything goes wrong it’s not my fault.”

He gives them his four points for success: integrity discipline a positive attitude and surrounding themselves with friends who want them to make it.

He imparts the importance of patriotism of knowing American history and the uniqueness of the Declaration of Independence the only founding document to combine “nationalism and the absolute importance of individual freedom ” he says. “If a youngster does not understand that we’re the first and only country in the history of the world that has done that then he or she fails to understand why he or she lives in the land of opportunity.”

This attorney with an impeccable command of the English language who drops works like “adroitly” and “alacrity” into everyday conversation preaches to anyone who will listen the necessity of learning how to communicate clearly — “every youngster needs an understanding of the English language that will enable him to communicate in writing and verbally tersely accurately clearly and sensibly ” he says — and math skills.

“Those are the kinds of messages I think are important ” Rountree says. “And the people who need to hear them are young people who have lost hope.”

His involvement in youth goes far beyond talking. He works behind the scenes with coaches who have an influence on young people by trying to get school gyms to open over the summer. One of Rountree’s latest focuses: youth mentor Vance Williams’ 1310 Dock Street center to create a safe space for young men and women age 14-28.

Rountree is deeply aware of Wilmington’s tragic past and the impact that is still being felt today. It is what motivates him to invest his time and treasure in the minority community. The need he says is too great to ignore.

“It probably cries out for it as stridently with a pitch of rancor and disappointment that is difficult for an audience to ignore if you listen to it ” he says.

It’s why he invested in tennis great Lenny Simpson also a Wilmington native who at 15 became the youngest male to ever compete in the U.S. National Championships at Forest Hills.

It’s why chaperoned by Williams and two others he shared his wisdom and four points for success with six at-risk youths at Port City Chophouse on a fall night in 2014. It’s why he’ll continue to invest in people like Williams who can have an impact in areas he can’t.

“Those young people think ‘You white people don’t understand. You’ve never had the kind of barriers that we’re required to leap.’ And most of the time that’s accurate ” Rountree says. “Vance can make a difference. They believe in him.”

Rountree knows that not everyone touched by his giving speaking or behind-the-scenes work will have a life-changing experience. But some will and that makes it worthwhile.