The journey of artist Amelia Hutchins 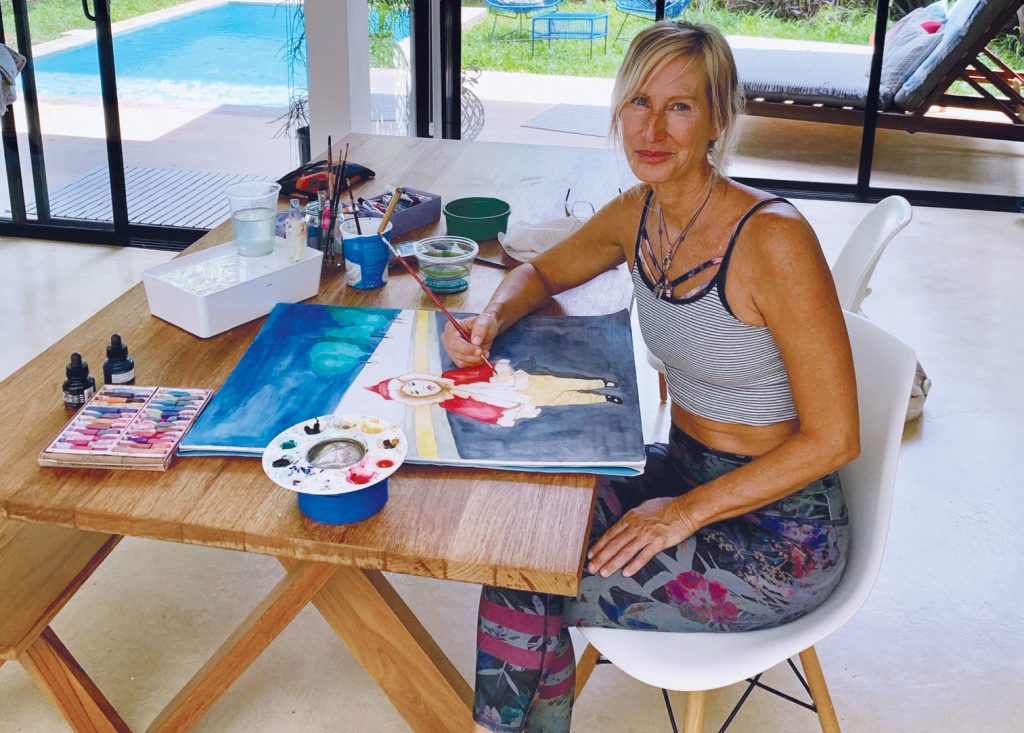 Stepping outside the comfort zone is a great way to find inspiration.  Whether it is an active pursuit, something passive or a happy accident does not really matter.  The point is travel, new experiences, landscapes and settings have exerted a significant influence on the lives of numerous artists and the work they produced.

What if Hemingway had decided to stay home instead of running with the bulls?  What if Hunter S. Thompson had never visited Puerto Rico or Las Vegas?

It is impossible not to think of Paul Gauguin, his life in Tahiti and the incredible volume of work that followed. Who remembers Gauguin’s early work anyway? For those of us who are not art historians or critics, his work conjures images of rich, vibrant colors, Polynesian culture, bright flowers and tropical landscapes.  Gauguin was not exactly an unknown before his journey to and residency in Tahiti, but his best work resulted from his time there.

The Costa Rican landscape is similar to that of Tahiti:  showy flowers, rich, verdant greens and the deep, endless blue of the Pacific. Mountaintops and cliffs allow for endless, unobstructed views of the ocean and sky, and it’s an understatement to say the color palette presents a contrast to that of Wrightsville Beach.

After learning more about the “Rich Coast” and the life of Amelia Hutchins, a long-time surfer and a native of the Southeast with a passion for art and the natural world, it is easy to see why she says she has found a new home there.  Like Gauguin, her decision to leave the world she knew behind was a leap of faith.

Already a successful artist, Hutchins faced a language barrier when she initially arrived in Costa Rica.  Relocating to a foreign country is hard enough; doing so without the benefit of knowing the local language ups the stakes significantly.  Apart from the obvious — beautiful scenery, fresh seafood, a relaxing lifestyle and great surf — Hutchins had a different reason for making a fresh start in Costa Rica.

Supporting her daughter was the impetus.  This is another departure from Gauguin, who famously turned his back on his many, many children.

Hutchins was raised in Jacksonville, Florida, and spent time in Ocean Beach, California, but didn’t start surfing until she was older and living on Harbor Island.

“I wanted to position my daughter in a place where she could be in warm water and quality surf,” she explains.

Though she admits she felt a real sense of anxiety about uprooting the two of them and moving to a foreign country  Hutchins notes that her 15-year-old daughter’s fearlessness and enthusiasm were motivators.

“You can’t let fear run your life,” says Hutchins. “How could I not want to help my daughter pursue her dream?  I wanted to set an example, show her that I had the courage to do this, and of course, go on a fun adventure with my daughter.”

It may be a surprise to find out Paul Gauguin was a successful stockbroker before he left that behind in favor of becoming an artist.  Paying bills is an unfortunate reality of life, even for visionaries, but it is hard to imagine a personality that can effectively bridge the gap between art and numbers and balance sheets.

Very few people are able to put food on the table solely through the production and sale of their artwork.  To do so is an achievement unto itself; a dividing line between those for whom art is a hobby and those for whom it is a necessity of life.  Hutchins was already one of those fortunate few working, successful artists when she picked up shop and moved to Costa Rica.

Upon viewing her work, it should be no surprise to learn that Hutchins has been a commissioned portraiture artist for many years.

The notion that the eyes are windows to the soul immediately comes to mind when viewing Hutchins’ artwork.  With backgrounds that are either completely blank or filled with playful recurring elements from graphic art, there is nothing to distract the viewer from the eyes or her exploration of light and shadow.

Not surprising given that she is a mom who made a leap to a new country in support of her daughter, Hutchins’ work has an element of compassion, along with an understanding of the inner complexity of her subjects.  Her art is as vibrant and full of life as her subjects — mixing reality, feeling and perception with classical portraiture, pop art and the high graphic.

Hutchins showcased her work in numerous art shows in Wilmington and the surrounding areas, and much of it is also available through her other business, Coastal Cleared Art.

Essentially an art prop house for film studios, both locally and nationwide, Coastal Cleared Art has more than 1,200 framed art pieces available for immediate rental.  The company also offers a large number of art files that are available for digital download, which can be printed and sized according to the client’s requirements and parameters.

Hutchins says the idea was born from several conversations with her friends in the Wilmington film industry.  Like many other thriving businesses, Coastal Cleared Art came about when a visionary/entrepreneur simply recognized a need and decided to fill it.  The name reflects the fact that the artwork seen in movies and TV shows has to be cleared before it can be used. There is a mountain of red tape, a spiderweb of complexity associated with copyright laws, which have to be successfully navigated before a work can appear in various production outlets.

Because of advanced technology, Hutchins is able to run most of the operations from her home in Nosara, Costa Rica.  She has an assistant who is local to the Wilmington area.  Together, they help clients identify a path through the red tape and ensure the work they are interested in is cleared for use in other mediums.

Some of the other services Hutchins and her team at Coastal Cleared Art offer include custom graphics and posters, curatorial services, public domain research and of course commissioned artwork.  Aside from allowing Hutchins to marry her passion for film and the arts — it provides numerous other artists, around 35 at the latest count, many of whom are from Wilmington — with an opportunity to showcase their work and earn a living.

If that were not enough, Hutchins is also a successful real estate investor who has renovated several homes.  She has a number of both long-term and vacation rental units, which are helping to finance her Costa Rican relocation.

Occasional vacancies also provide her and Delilah with a place to stay when they want to come back to visit family and friends.  Hutchins explains that owning and maintaining rental properties are an aspect of her plan to live a simpler, happier life, free from the constant pursuit of material gratification.

“A purchase only offers a fleeting moment of happiness,” she says. “Our culture is based on the importance of constantly wanting new things; the latest phone, the newest car, etc. I wanted to escape from all of that and find a slower pace, a more fulfilling lifestyle.”

Hutchins admits that, at times, her adventure in Costa Rica has been about managing first world expectations.  Vacationers and expatriates alike imagine that everything will simply be peaches and cream in such a beautiful place, but day-to-day life is not without its challenges.  Certain things just don’t happen at a pace that people are accustomed to in the first world.  Acceptance is the key for those who want to adjust; those who are unable to come to grips with the fact that things are often unavailable or happen at a slower pace will find lots of reasons to get upset.

“One lesson I’ve learned is just to celebrate the little victories,” says Hutchins, who at one time was without a car for a week due to a part being unavailable.  Finding out that it likely could have been sourced and shipped in the U.S. in a day or less is hard enough. Discussing the issue in a foreign language adds another layer of stress to the equation.

A number of moments have made it all worthwhile.  Being surrounded by awe-inspiring natural beauty, going on fun outings with her daughter and new friends, and surfing good waves with manta rays and dolphins in the background are but a few of the highlights.

Hutchins explains that a contributing reason for her decision to move was to minimize her expenses and free up more time to focus on her personal art.

“There’s a certain freedom in realizing that there is a difference between wants and needs,” she says.  “Being here has been about shedding crutches for me, finding more time to focus on what is really important.”

With a new life awash in beautiful landscapes and fresh experiences, more time on her hands and an art business that is perfect for finding inspiration, there are a lot of reasons to be enthusiastic about the future body of work from visionary artist/surfer/entrepreneur Amelia Hutchins.