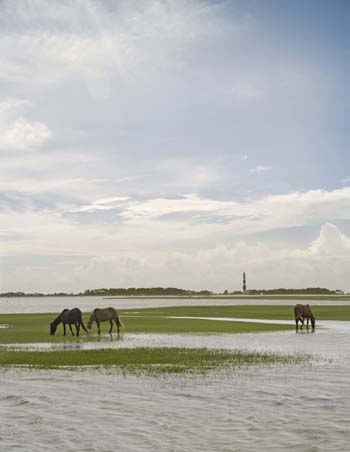 Located on the Crystal Coast of North Carolinas southern Outer Banks the town of Beaufort draws visitors for many reasons: her charming historic district her beautiful waterfront some of the best fishing and diving on the eastern shore and the nearby Cape Lookout National Seashore with its 56 miles of unspoiled silken beaches. But this year during the month of September Beaufort offers yet another reason to visit her 300th anniversary celebration!

Billed as a “homecoming ” this celebration is unique in several ways. “Weve chosen to call it a homecoming because its more than just a festival with fireworks and fried oysters ” says Janet Grainge executive director of the event. “Its all about leaving a legacy for our children and for future generations.”

As part of the towns tricentennial celebration residents have been gathering the fourth Thursday of each month since January 2009 for “oral history parties.” These monthly events have included a potluck dinner and a panel of longtime Beaufort residents some in their 80s and 90s and the 106-year-old Grande Dame of the town who have shared fascinating stories and recollections of growing up in Beaufort. Each months panel was composed of different people and focused on various aspects of the towns history such as the fishing industry local sports heroes educators and more. These story sessions were broadcast by Time Warner Cables Carolina 10 and recorded by Carteret County News-Times. 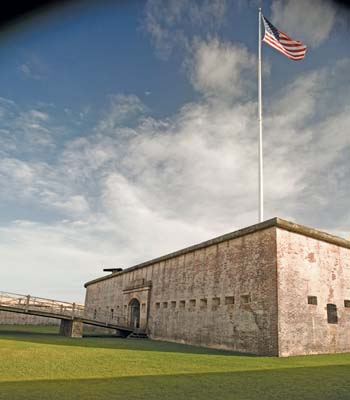 In addition to the footage obtained from these oral history parties more than 100 residents of Beaufort were interviewed by National Public Radios Story Corps a national independent nonprofit project whose mission is to honor and celebrate peoples lives through listening. The interviews are being recorded for the Library of Congress and a copy of the Beaufort interviews was placed in the towns library.

Beaufort is also celebrating its recent designation (in December 2008) as a “Preserve America Community.” Begun as a federal initiative in 2003 Preserve America encourages and supports communities efforts to preserve their cultural and natural heritage.

“We are one of 23 communities nationwide that have attained this designation ” says Grainge. “The credit goes to all of our amazingly talented and dedicated local volunteers as well as several preservation organizations including Beaufort Historical Association Friends of the Maritime Museum the Beaufort Womens Club and the Beaufort Rotary Club among others.”

Beauforts 300th Homecoming Celebration happens during the weekends of September 11-12 and September 26-27 and will feature a wide variety of events and a healthy dose of Beauforts Southern hospitality. Visitors are invited to experience a homecoming parade Maritime Heritage Celebration street concerts community art show ice cream social flotilla working boat maneuvering competition shrimp boat parade and Shrimp-a-Roo sailboat rides various demonstrations by the Coast Guard and a “battle of the boats.” Most events are free and open to the public. A complete schedule of activities can be found at www.beaufortbythesea300.org.

In addition to the Homecoming festivities there is plenty to see and do in and around Beaufort. The third oldest city in North Carolina Beaufort has a unique history spanning both the Revolutionary War and Civil War. In the 1700s she served as a home base for Blackbeard the pirate and in modern times provided the backdrop for some of Nicholas Sparks novels including A Walk to Remember and The Choice.

Begin your tour of the town aboard Beauforts 1948 vintage double-decker bus (direct from London). The tour begins at the Beaufort Historic Site where you can also visit 11 historic buildings including North Carolinas oldest courthouse a jail an apothecary a doctors office and more.

With 100-plus beautifully restored historic homes from the 18th and 19th centuries Beaufort looks very much like it did in the past. The town is built almost exclusively of wood (only two brick buildings) and most are still painted white the same as when they were originally built. And because the town was commandeered and used as headquarters for opposing troops in both the Revolutionary and Civil Wars there was virtually no damage to the town during those wars.

Though the bus tour will take you past the Hammock House which was home to Blackbeard in the early 1700s and by the Old Burying Ground one of the oldest cemeteries in North Carolina you may want to revisit both on foot.

Originally named Fish Towne Beaufort is a town whose history is indelibly tied to the sea. The town has always been an important seaport for whalers fishermen merchants and shipbuilders. The North Carolina Maritime Museum is a must-see including many exhibits on North Carolinas boating history and its crown jewel artifacts from the Queen Annes Revenge the believed wreckage of Blackbeards prized flagship which was discovered more than ten years ago in Beaufort Inlet. Directly across the street from the museum is the Harvey W. Smith Watercraft Center which houses a working boat shop where visitors can watch the restoration and construction of wooden boats.

Plan an afternoon to browse through the quaint shops on the waterfront and stop for lunch at a local favorite Beaufort Grocery Company to enjoy unique sandwiches such as “Sumpins Jumpin” (grilled fresh fish sandwich) or “Mrs. Abbys Crabby Sandwich” (two sauteed crab cakes wedged into a croissant). The Blue Moon Bistro reminiscent of a French country bistro is a great stop for dinner. Be sure to order their famous lemon tart with berry sorbet and warm chocolate sauce for dessert.

Several different ferry lines run from Beauforts waterfront or from nearby Morehead City to the islands so pack a picnic lunch plenty of sunscreen and bug spray and head to North or South Core Banks for wonderful shelling clamming and surf fishing. Take your camera to capture a photo of the 169-foot black and white diamond-patterned Cape Lookout Lighthouse and Keepers Quarters which were built in the mid-1800s.

Many of the ferries also stop by Shackleford Banks to allow you a glimpse of the famous Shackleford Horses (also known as Banker ponies). These 120 Spanish Mustangs which most likely swam ashore from a 16th century shipwrecked Spanish galleon some 300 years ago are the only permanent residents of the nine-mile long island. 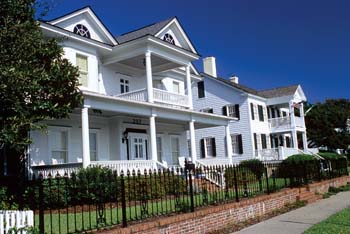 If youre a nature enthusiast the barrier islands and surrounding area is the perfect spot for fishing kayaking bird watching and shelling. The Rachel Carson Reserve located on Carrot Island boasts 2 650 acres of salt marshes tidal flats salt flats and more than 200 species of birds. North Carolinas largest aquarium is located nearby in Pine Knoll Shores.

For the history buff a visit to Fort Macon State Park is well worth the trip. The park which encompasses 385 acres of pristine beach dunes and maritime forest is also home to Fort Macon the five-sided Civil War fortress.

eaufort offers several historic inns and B&Bs such as the Pecan Inn the largest B&B in downtown Beaufort with seven elegantly appointed rooms and a very fine continental breakfast. Cousin Marthas B&B is a 188-year-old home featuring an English flower garden and a relaxing porch. Owner Elmo Barnes offers guests an elegant assortment of exotic spices and 18 varieties of homemade sausage which he has been concocting since his days in the Navy back in the 1950s.

September promises to be a great month to visit Beaufort-by-the-Sea. Whether you choose to join the locals and participate in the 300th year anniversary festivities or seek seclusion on one of the beautiful barrier islands you will find that Beaufort and the entire Crystal Coast is a magical destination full of sweet coastal charm history and natural beauty.