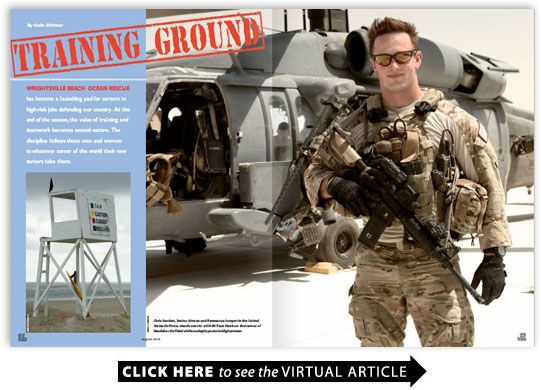 At the end of the season the value of training and teamwork becomes second nature. The discipline follows these men and women to whatever corner of the world their new careers take them.

United States Air Force Senior Airman and Pararescue Jumper Chris Sanders was a graduate in 2006 who found his way onto the WBOR squad the summer of 2008. The initial two weeks of training he says was one of the hardest things he had done at the time. The most difficult aspect of the job was adjusting to the overwhelming responsibility that came with it.

You sit on that stand look out on the beach and depending what stand youre at you might have thousands of people in a mile-long stretch of beach that you are technically responsible for he says.

Now as a pararescue jumper stationed in Sanders responsibility shifted from rescuing beachgoers to rescuing the men and women of the military.

We work a shift from 2 a.m. to 2 p.m. wake up get on shift do a gear swap stand by and wait for missions Sanders says. They are pretty much all rescue missions. When guys get hurt on the ground they send out a request for pick up and we go pick up the injured guys treat them and take them to the hospital.

When youre making a rescue there is nothing else in the world that matters; youre just so focused on this one thing and helping this person he says. I definitely realized that that summer and it pushed me to do what Im doing now. It feels good because you do all this training and it is used to actually help somebody. Somewhere in the back of your mind you know that person is better off because of you.

Sanders and another guard rescued seven- and nine-year-old boys north of Johnnie Mercers Pier the summer they served at Wrightsville Beach.

The two boys in distress were spotted between the stands they were manning. Sanders and a fellow guard jumped into action.

We both had a pretty long way to go to get to them he says. They ended up being fine; the one kid I ended up grabbing was unconscious when I first got to him but after I jarred him awake he started coughing up.

Sanders says the thing he had the biggest problem dealing with after the incident was the fact that he had not seen the boys first.

Especially with what Im doing now I see some pretty messed up stuff and it doesnt faze me too much except for when things do not go exactly the way I expect them to in terms of my performance he says.

Native Pennsylvanian Christie Schreckengost was faced with many challenges when she applied her teenage experience as a pool and waterpark lifeguard to Wrightsville Beach Ocean Rescue from 2003 to 2005. Schreckengost now a lieutenant in the United States Coast Guards Deployable Operations Group in Arlington Virginia says I have lots of favorite moments of her time in ocean rescue. That was the best time of my life and just being a part of that it set the foundation and the groundwork for where I am today.

Schreckengost first learned of the opportunity to join ocean rescue during her undergraduate career at the University of North Carolina Wilmington where she was a javelin thrower for the track team. Her decision to pursue the grueling ocean rescue tryout and training process prepared her for the role of the nations managing dive officer for the USCGs regional dive lockers in San Diego California and Portsmouth Virginia. As the managing dive officer Schreckengost handles the allocation of resources budget and mission planning for the dive locker units which conduct missions for Ports Waterways and Coastal Security Underwater Ship Husbandry Aids to Navigation and Cold Water Ice Diving.

I can base a lot of my stuff off ocean rescue. It really did help me train for the Coast Guard she says. The leadership experience I gained there has definitely gone into the Coast Guard with me.

Schreckengost attributes much of her success to ocean rescue director Dave Baker.

Dave really did teach me how to be humble how to lead people and not only leading people by doing but by always being there Schreckengost says.

Schreckengost remembers a time Baker was there for her in what was the most dramatic experience of her three seasons as a member of Wrightsvilles ocean rescue team.

As a powerful afternoon thunderstorm made its way onto the beach one summer day in 2005 Schreckengost and a fellow lifeguard carried a familys wheelchair-bound grandmother to safety from the beach near Johnnie Mercers Pier. With most of the beachgoers cleared from the strand Schreckengost returned to the ocean rescue truck to hook up the trailer that carried the squads ATV.

I was trying to get the trailer hooked up to the truck and I just happened to be in the right place at the right time she says. Lightening hit the ground and came right through me because I was touching metal. It felt like a Charlie horse on my whole body; it froze up all of my muscles.

Schreckengost says she was transported to the fire station where Baker and the rest of the team worked diligently to stabilize her condition. She credits Baker with saving her life.

Now having seen some of the top ocean rescue squads around the nation she believes that WBOR is one of the best.

It is definitely one of the premiere ocean rescue squads in the United States compared to California and Hawaii and that is a big compliment. Dave has done a fantastic job there. That whole place has been transformed the improvements from the lifeguard stands to the trucks to the Jet Ski adding stands adding personnel it has come so far.

to be an effective recruiter convincing

her UNCW track teammate Eric Templeton to follow her advice to try out.

A scholarship track sprinter Eric Templeton admits he was never the best or fastest swimmer.

After being the last candidate chosen during his first tryout for ocean rescue Templeton says his five-season career (2004 to 2008) as a Wrightsville Beach guard prepared him mentally and physically for what he encounters on a day-to-day basis as a Senior Airman in the United States Air Force Special Tactics. Now Templeton says he is one of the best swimmers in his division. Within AFST Templeton is assigned to Combat Control the division that acts as air traffic controllers deployed into a hostile area to either secure a landing zone or direct an airstrike.

We deploy with Navy Seals and all of the well-known special operations forces he says. Our training is some of the toughest in the military day in and day out having that mental toughness helps out.

Templetons mettle was put to the test in July 2007 on a day when the rough ocean conditions dragged two adult brothers down around the pilings of Johnnie Mercers Pier.

Two brothers went down under the pier and we searched for them for about 20 minutes and finally found them Templeton recalls. One of them we saved and the other ended up not making it.

Templeton says Dave Baker had their back the entire time.

He gave us words of advice all the time helping us through the adversity.

After 22-year-old Alejandro Perez Marcil was pronounced dead Baker and the rest of the team helped him deal with the gravity of the situation.

Along with the mental and physical conditioning gained as a member of ocean rescue Templeton says the camaraderie he experienced within the squad was one of the main reasons he chose to continue his service by joining the military.

If you talk to anybody [in WBOR] they will tell you it became almost like a lifestyle that you live more than a job. You go on fun training exercises and you save lives together and use a lot of teamwork he says. You go work a normal job and you miss that that steered me toward special ops. The military seemed like a good fit.