3 ways to find the best one for you and a slew of information you need to know to make an informed decision!

Fields of Law
Start here … Get to know what type of lawyer you need and then proceed to the lists! By Kathryn Cook

North Carolina Bar Board Certification
To become a certified specialist in North Carolina a lawyer must meet several rigorous requirements … and this group has done that. Edited by Pat Bradford

Martindale-Hubbell Peer Review Ratings
Peers evaluate each other based on 5 criteria using a scale of 1 to 5. Edited by Nikki McCall

How to begin to find the right attorney from among the hundreds? Start here. Our comprehensive guide will point you toward some of the top legal minds on the Cape Fear Coast.

The North Carolina State Bar the agency responsible for regulating the practice of law in North Carolina lists 23 765 active attorneys in the Tar Heel state. In New Hanover County alone there are 683 licensed attorneys listed as practicing in dozens of different areas of law.

Most hang their shingle out for hire to the general public while others are employed in corporate municipal or court arenas like big business the district attorney or public defender offices and judges.

Whether youre looking to create a will file for divorce appeal a disability claim that was denied or defend yourself in a criminal action having an experienced attorney on your side is the best way to navigate complex legal issues and ensure your interests are protected.

With a tradition predating even the founding of our country admiralty law is one of the oldest areas of law. Generally it concerns anything relating to maritime commerce from cargo damage to vessel repairs to the transportation of passengers and goods by sea. “Because admiralty law casts such a wide net it can involve individuals and corporations on any number of issues ” says Geoffrey A. Losee a partner at Rountree Losee & Baldwin L.L.P which has a significant practice area devoted to admiralty and maritime law.

Losee says port cities such as Wilmington are typically more impacted by admiralty laws as they are hubs of maritime commerce and activity. “The most common concerns we see include disputes that arise out of a maritime business or the sale or repair of a vessel ” says Losee who is a graduate of the U.S. Naval Academy and vice-chairman of the Southeastern Admiralty Law Institute. He says there are several instances where the average recreational boater would need to contact an admiralty attorney: Before entering into a contract to buy or sell a vessel promptly after someone is injured aboard a vessel or the vessel itself is involved in an accident and if problems arise with an insurance carrier regarding a claim on a vessel.

There were 6 113 bankruptcy cases filed in the Eastern district of North Carolina from January-July 2010. Nearly 60 percent of these were chapter 13 cases followed by chapter 7 cases where a debtors nonexempt assets are sold and the proceeds are distributed to creditors. Algernon L. Butler III a partner with Butler & Butler L.L.P. says “in the Eastern district of North Carolina and particularly in Wilmington attorneys see more [chapter] 13 filings than anything else. Under the Bankruptcy Code a chapter 13 case involves individuals who make regular payments to the bankruptcy trustee to pay back a portion of their debts.

Butler urges people in difficult financial situations not to wait before they seek qualified legal advice. “We help people decide whether or not bankruptcy protection is appropriate for their business situation and in the best interest of their family ” he says. “The overarching policy behind bankruptcy is to give honest but unfortunate debtors the opportunity to organize their affairs to become a productive and self-supporting member of society once again.”

When a business is involved in a dispute whether that business is an LLC a large corporation or a two-person partnership the services of a business litigation lawyer will often be necessary. Jenna F. Butler a senior attorney with the business litigation section of Ward and Smith P.A. counsels clients involved in a wide variety of business disputes from breach of contract to business fraud. “Typically ” she says “the dispute is either an internal issue within a business or its an external problem with the business conducting business with someone else.”

Though Butler is quick to admit that litigation is both expensive and time-intensive she adds “There are things lawyers can counsel you on ahead of time to avoid pitfalls and better your position.” For instance she says that a common mistake many people make is not preserving evidence. “Save emails take notes of occurrences and keep records ” she advises. “If its inevitable that youre going to end up in a dispute these are things that can really benefit your case down the road.”

Individuals charged with misdemeanor or felony crimes will find themselves in need of a criminal attorney. Misdemeanors such as traffic violations and simple assault and certain felonies including robbery and murder are violations of state law. Federal crimes include felony offenses such as white-collar bank fraud bank robberies and serious drug trafficking offenses. Although a routine misdemeanor may only involve fines and court costs a more serious felony could mean prison time. Regardless of what charges youre facing its best to seek out competent legal counsel as soon as possible says Haywood (Woody) White III. White a partner in White & Hearne L.L.P. is a board-certified legal specialist in state and federal criminal law and a former North Carolina state senator.

Blacks Law Dictionary the most widely used law dictionary in the world defines estate planning as “a branch of law that involves the arrangement of a persons estate taking into account the laws of wills taxes insurance property and trusts.” Jill L. Raspet a member of the Trusts and Estates Team at Smith Moore Leatherwood L.L.P. assists clients in drafting and executing comprehensive estate plans to ensure their financial goals are met after they pass away. She says a lot of uncertainty and confusion exists about estate laws and tax rules.

“I think one of the biggest misconceptions out there ” says Raspet “is that if you pass away and you are married all of your assets automatically go to your spouse. That is not the case in North Carolina.” Raspet who is a board certified specialist in estate planning and probate law says she also sees many clients who have moved to Wilmington from other states. “They are concerned about how North Carolina laws differ and impact what they have already drawn up. Sometimes there are only minor changes and sometimes they need things completely redone.”

The specialty of family law deals with domestic and family relations including marriage divorce alimony child custody and support equitable distribution distribution of property and payment of spousal or child support domestic violence bastardy and adoption. Geannine M. Boyette a Wilmington family law attorney whos been practicing for 12 years says that the primary difference between domestic law and other practices is the emotionality of the clients.

“The clients we deal with are going through an extremely difficult time in the place that  literally hits them closest to home ” says Boyette. “A lot of my clients are concerned that they are going to lose their children or their homes and they are dealing with the fact that their lives will never be the same.” For individuals who find themselves in these types of situations Boyette warns them against relying on the Web for information. “There is a lot of false and/or misleading information about divorce and domestic issues on the internet ” she says. “While a consultation with an experienced domestic attorney can range from $150-$300 it is well worth the money to meet with a professional prior to making life altering decisions.”

With the large number of new neighborhoods and master-planned communities on the Azalea Coast its possible you may find yourself in need of an attorney who specializes in real estate litigation. “We commonly see disputes between developers and homeowners and community associations ” says Scott Lewis a partner at Hedrick Gardner Kincheloe & Garofalo L.L.P.

Lewis oversees the firms practice area focusing on Homeowners and Community Association law along with fellow attorney Ellen Persechini. Some of the more frequent cases they see involve disputes about HOA voting rights and whether a real estate developer must pay for assessments or maintain common elements of the Association.

Persechini says that while the economic downturn has not affected the number of disputes that arise among the firms clients it has often affected the way they handle it. “Many businesses are seeking alternative dispute resolution such as mediation or arbitration ” she says. “Alternative dispute resolution can be a faster less expensive option compared to the traditional forum of a civil trial.”

Attorneys can specialize in residential or commercial property law.

Every time you receive a paycheck the government takes out a portion for social security tax. Some of that tax is put into a retirement account some helps fund Medicare and between 15-20 percent of it buys a social security disability policy explains James (Jim) B. Gillespie Jr. a Wrightsville Beach native and board-certified legal specialist in social security disability law. “You have to have worked or paid in for 10 full years before you actually own the policy and can draw benefits if you are disabled ” says Gillespie.

Although disability claims are often denied initially they can be appealed at several different levels in order to obtain benefits. This is typically where the services of an experienced attorney are essential. “I generally encourage people to apply for disability on their own and go through the initial process without me ” says Gillespie “but I am very aware that the forms within the application process are difficult and sometimes confusing.”

Personal injury law deals with an individual who has been harmed either physically or psychologically due to the negligence or wrongdoing of someone else. Greg Jones founder of Greg Jones & Associates PA has been practicing personal injury law for more than 25 years. His firm represents individuals who have been injured by everything from an automobile accident to a defective medical device. “We see people who slip and fall people who are injured on the job people who have suffered serious dog bites ” says Jones. “We offer them peace of mind and security so they can focus on getting better.”

One aspect of personal injury law unique to other legal areas is the contingency fee structure. Typically a personal injury attorney is only paid if their clients case is successful commonly known as a “no win no fee” policy. There are many benefits to this type of structure says Jones including the fact that it allows any individual the opportunity to have an attorney. “Requiring payment up front would restrict a lot of people from getting fair legal representation ” says Jones. “If we do a good job for our client we do a good job for ourselves.” 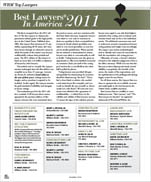 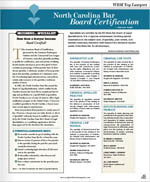 North Carolina Bar Board Certification To become a certified specialist in North Carolina a lawyer must meet several rigorous requirements … and this group has done that. Edited by Pat Bradford 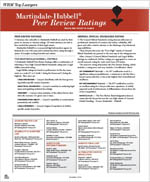 Martindale-Hubbell Peer Review Ratings Peers evaluate each other based on 5 criteria using a scale of 1 to 5. Edited by Nikki McCall