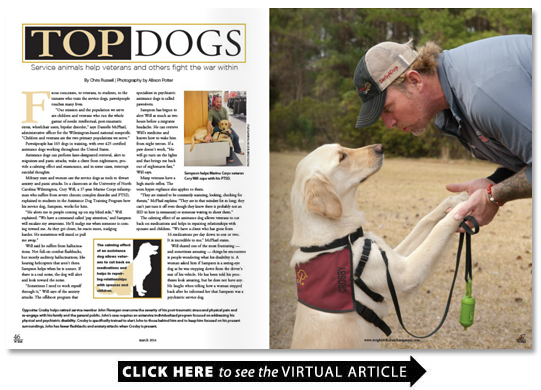 From children to veterans to students to the inmates who train the service dogs paws4people touches many lives.

“Our mission and the population we serve are children and veterans who run the whole gamut of needs: intellectual post-traumatic stress wheelchair users bipolar disorder ” says Danielle McPhail administrative officer for the Wilmington-based national nonprofit. “Children and veterans are the two primary populations we serve.”

Paws4people has 165 dogs in training with over 425 certified assistance dogs working throughout the United States.

Assistance dogs can perform laser-designated retrieval alert to migraines and panic attacks wake a client from nightmares provide a calming effect and reassurance and in some cases interrupt suicidal thoughts.

Military men and women use the service dogs as tools to thwart anxiety and panic attacks. In a classroom at the University of North Carolina Wilmington Cory Will a 17-year Marine Corps infantryman who suffers from severe chronic complex disorder and PTSD explained to students in the Assistance Dog Training Program how his service dog Sampson works for him.

“He alerts me to people coming up on my blind side ” Will explained. “We have a command called ‘pay attention ‘ and Sampson will escalate my awareness. He’ll nudge me when someone is coming toward me. As they get closer he reacts more nudging harder. He sometimes will stand or pull me away.”

Will said he suffers from hallucinations. Not full-on combat flashbacks but mostly auditory hallucinations like hearing helicopters that aren’t there. Sampson helps when he is unsure. If there is a real noise the dog will alert and look toward the noise.

“Sometimes I need to work myself through it ” Will says of the anxiety attacks. The offshoot program that specializes in psychiatric assistance dogs is called paws4vets.

Sampson has begun to alert Will as much as two hours before a migraine headache. He can retrieve Will’s medicine and knows how to wake him from night terrors. If a paw doesn’t work “He will go turn on the lights and that brings me back out of nightmares fast ” Will says.

Many veterans have a high startle reflex. The term hyper-vigilance also applies to them.

“They are trained to be constantly scanning looking checking for threats ” McPhail explains. “They are in that mindset for so long; they can’t just turn it off even though they know there is probably not an IED in here (a restaurant) or someone waiting to shoot them.”

The calming effect of an assistance dog allows veterans to cut back on medications and helps in repairing relationships with spouses and children. “We have a client who has gone from 16 medications per day down to one or two. It is incredible to me ” McPhail states.

Will shared one of the most frustrating — and sometimes amusing — things he encounters is people wondering what his disability is. A woman asked him if Sampson is a seeing-eye dog as he was stepping down from the driver’s seat of his vehicle. He has been told his prostheses look amazing but he does not have any. He laughs when telling how a woman stepped back after he informed her that Sampson was a psychiatric service dog.

Paws4people had humble beginnings. When founder Kyria Henry was 12 she enjoyed taking her golden retriever to visit nursing home residents. She witnessed people coming alive by petting and talking to her dog. That spark ignited in 1999 inspired her to launch the nonprofit with the help of her father Terry a Vietnam veteran who suffers from PTSD.

During Henry’s middle school through college years she learned all she could about dog training and expanded her dog therapies to special education classrooms and hospitals. While managing her own nonprofit she graduated with honors from West Virginia University earned a master’s degree from Liberty University and obtained a Service Dog Certification from Bergin University.

Henry teaches four Assistance Dog Training courses at UNCW. Classes have grown so popular there is a waiting list to enroll. It is also the only academic program of its kind offered at a state university.

Service dogs in the paws4people program are with a certified trainer from birth until placement with a client a process of about one and a half years. Golden and Labrador retrievers are primarily used because of their intelligence and docile nature.

“Puppies are born here in Wilmington and go at six weeks to one of three puppy development centers: Chapel Hill one here and one in the mid-Atlantic ” McPhail says. “They get crate training basic manners and socialization and go on outings so they won’t be afraid.”

At 16 weeks old the dogs go to one of five West Virginia prisons where they receive further training and begin to function as assistance dogs in a program called paws4prisons.

The more than 130 trainers in the prisons are female and male inmates some of whom may be in a maximum-security setting. The inmates teach the dogs basic commands retrieving how to interrupt panic attacks and more than 120 other specialized commands.

“The rehabilitative effect the dogs have on the inmates during their time in the paws4prisons program is quite astounding ” McPhail says. “It is truly a life-changing opportunity for our inmate trainers one which brings positivity and success in a way that most of the inmates have never experienced in their lives.”

A dog is paired with a client during the paws4prisons phase in a process called a “bump.” Six-month-old dogs self-select who they will be helping by initially bonding with the client.

A 2012 paws4people YouTube video documents clients arriving at a prison to meet the service dogs in training. A veteran seeking paws4people’s services shared with others in attendance “I have a life worth living and a hard time living it.” He says he did all the “cool stuff.” He was in the Special Forces an Airborne Ranger and he served on multiple combat deployments. He was one of the tough guys who served his country well. He became a man who will live a better life with an assistance dog.

After completing the prison training phase the dogs return to Wilmington for further training with paws4people staff and students. The dogs remain in Wilmington until they are ready for graduation. At that time clients must undergo extensive transfer training to learn how to handle their assistance dog.

“They come once a month and work with their dog. Some may come four or five times and be ready to leave with their dogs. Others may take much longer ” McPhail explains. “The dog is almost always ready before the person.”

But the training doesn’t end. All assistance dogs remain the insured property of paws4people and all clients must travel to Wilmington once a year to recertify proving they are using their animal to the best of its ability.

“We have over 425 dogs certified trained placed and working in the country right now ” McPhail says.

The organization says the value of the two-year training and dog placement is approximately $36 000. Clients do not have to write a check for that amount. Instead they are asked to “pay it forward” in a variety of ways.

“It [a service dog] is free to a recipient but awareness is key ” McPhail says. “We suggest a fundraising goal of $10 000. Some don’t make it and some far exceed that amount. Some clients pay it forward by sweat equity speaking at fundraisers or other places on our behalf. We get a lot of family involvement from our clients and paying it forward has become a way for everyone to get involved with the placement process.”

Transforming Children One Dog at a Time

After being adopted out of Ethiopia by the McCumbee family Aaron’s first few years in Wilmington were spent in and out of hospitals as he struggled with speech apraxia a condition that inhibits his ability to talk.

Then when Aaron was 5 the family received a golden retriever named Hattie from paws4people shown above. Hattie is both a comforting presence and an intuitive guardian for Aaron. When he’s anxious she lies on top of him to soothe him with deep pressure. She makes him laugh. And she alerts Aaron’s mother Meredith when she senses something that could trigger a meltdown.

“I don’t remember what it was like before we had her ” Meredith McCumbee says. “I tell my husband all the time ‘I love this dog like she’s one of my kids.'”

Paws4people’s goal is to transform lives — whether for a military veteran struggling with PTSD a child prone to anxiety attacks because of a speech disorder or even for hundreds of kids at an elementary school.

A mellow golden retriever named Palmer is in training this spring to earn a job in the fall at Pine Valley Elementary School. The school will be the first in New Hanover County to receive a service dog.

Initially Palmer will help Pine Valley Elementary launch R.E.A.D. a national curriculum that helps children improve their literacy by reading to dogs. But paws4people founder Kyria Henry expects the school will find other uses for Palmer too — schools in Virginia from where Henry hails have used service dogs to help students with behavior modification physical therapy and to overcome dog phobias.

Palmer will go home every day with fifth-grade teacher Mark McCann who originally proposed the idea after learning about the program on a class field trip to UNCW where paws4people has a dog-training curriculum.

A classroom dog that helps children to read has a different personality than one that assists a veteran with PTSD Henry says. And Palmer has the perfect disposition for her role.

Cody Petree one of three UNCW students in charge of Palmer for the spring semester brought the dog to McCann’s Pine Valley classroom in January for the first time. Within minutes the golden retriever was sprawled on the floor as McCann’s 6-year-old son Ryder leaned on her. McCann Petree and Henry looked on marveling at how naturally Palmer inhabited her future job.

“She’s not going to think she’s working a day in her life ” Henry says. “That’s how you know you put the right piece of the puzzle in the right place.”