A hurricane-proof — and happy — home in Wrightsville 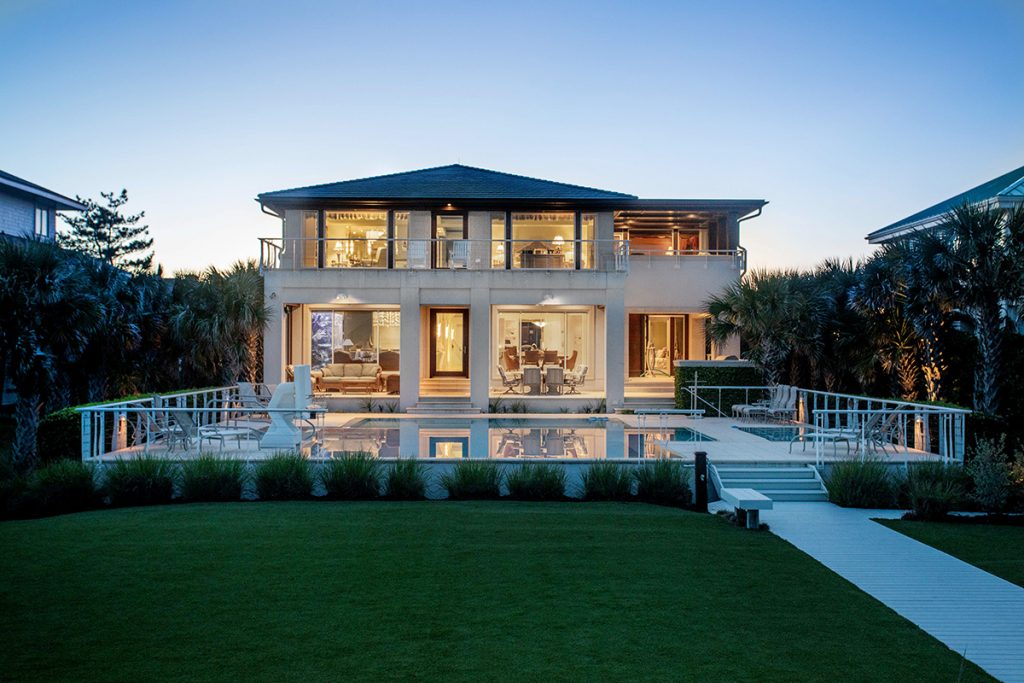 In 10 years’ time, the Atlantic’s tides have churned the highest swells since Hurricane Hazel in 1954. Four major hurricanes have pummeled the North Carolina coast in the last decade. But nary a puff of wind has rocked the foundation, nor a drop of rain has trickled inside the walls of an oceanfront, barrier island castle by the sand or sea.

Cemented into the land and seascape of Wrightsville’s fashionable north end, the home — loved by three generations of family members — was, and is, a feat of engineering. And its interior was, and remains, a harbinger of the mid-century modern aesthetic that swept the country in the years following its completion in 2010.

The homeowners’ love affair with the North Carolina coast began decades ago, when the husband’s travels from Corning, New York, to Wilmington in the 1970s drew his attention to Wrightsville Beach. He and his wife invested in a Duneridge condo in the pre-construction phase during the late 1980s. By the early 1990s they had purchased unbuilt oceanfront property on North Lumina Avenue. Then, they weathered the storm surrounding the movement of Mason Inlet to preserve a rapidly eroding shoreline, while they built a log home on Lake Toxaway in the western North Carolina mountains where the fishing was fine.

In the late 1990s, attention turned toward the coast once more.

“My wife likes the ocean a lot, so we thought it would be a great place for family to visit,” the husband says.

Their first hire was the late Nick Garrett. The builder used his Southern charm to navigate the permitting process, which allowed them to build a substantial 7,900-square foot home on contiguous oceanfront and oceanside lots. The team also included Michael Ross Kersting, who had recently relocated from the southwest to lead Garrett’s architecture division, and project superintendant Trevor Lanphear, now a Wrightsville Beach-based custom homebuilder. Hunter Coffey, now a successful Boone architect, was also an early team member.

“It’s one of the most complicated projects we’ve ever designed and built,” Kersting says.

After arriving on the East Coast, Kersting quickly became known for developing an idiomatic architectural expression rooted in contemporary lines and nautical details. Early in the design process, the house took on yet another coastal nuance, that of a sandcastle.

The homeowner wanted the home to be as hurricane proof as possible. It was built from cast-in-place concrete pilings to support concrete slabs on the first and second levels, “very rare for a residence around here,” Kersting says.

Over 1,000 cubic yards of concrete were used in constructing the home.

“It has 222 pilings driven 18- to 22-feet deep,” Lanphear says. “A compact layer of hard shell was consistently hit at a depth of 14-feet causing piling installation to take a few weeks longer than scheduled. The home is truly built on Shell Island.”

The exterior walls are clad in concrete blocks on stucco.

“The decorative concrete panels on the side have the appearance that sand takes on in the wind — the wavy pattern — that became a theme,” Kersting says.

While the home’s exterior is rigidly engineered to withstand the elements, the interior is anything but linear. Think of floating, watery, fluid, undersea, dreamy, undulating, wavy, amoebic, jelly, fishy.

“Everywhere you go, you get the feeling there’s water flowing, and there’s sand,” says the homeowner.

Coral stone —  from fossilized shells and sea creatures — is an organic material, says Nancy Mullineaux of Dezign Inspirations/Home Design Resource, the third principal member of the team. The native Wilmingtonian, who studied and practiced interior design in Florida before returning home, introduced the homeowners to many of the innovative materials incorporated into the interior.

“There were very few ideas that Nancy presented that we said no to,” the homeowner says. “The coral pillars, her ceilings, make it flow.”

The decorative coral stone columns throughout are actually 24-by-24-by-1-inch thick tiles most apparent in the lofty two-story foyer and elsewhere in design details. The ceilings in many of the public gathering spaces add layers of depth and volume in contoured soffits that twinkle with recessed lighting, some hung with elaborate fixtures custom designed by Mullineaux.

“Nancy had the talent to put things together,” he says. “We really liked the way she could analyze what we wanted so well.”

To help her clients visualize her concepts, she took them into homes she had designed for show-and-tell and on four or five buying sprees to the High Point Furniture Market.

The interior palette evolved organically. It shimmers with shades of tumbled sea glass paired with dramatic flashes of lagoon blue and emerald green, plus silver leaf and faux gold finishes, though it was necessary to ground some spaces in bleached sand and indigenous wood tones.

Hands down, the great room is a favorite hangout. The swimming pool and hot tub are just paces away and the ocean is beside it, while inside the fireplace is surrounded by a 2,000-gallon saltwater aquarium.

The combination of fire and water elements were Mullineaux’s boardroom brainstorm during one of many eight-hour roundtables. The high-tech compromise appealed to the husband, who retired from Corning as a high-echelon executive and pivotal member of the corporation’s space program team.

While his custom home crew consulted fireplace, aquarium and water quality specialists from Fort Lauderdale and Charleston, he pored over tropical fish catalogs choosing the species he wanted, only to be told not all live in harmony with one another. The school was narrowed down to Australian tusk, blowfish, and several species of angelfish, including flame, hawk, yellowtail and damsel.

“The kids love it,” he says. “We have nine grandchildren. They named the fish, and they feed them frozen food.”

The designer’s touch is evident throughout the interior in her custom-designed pieces, and none more so than in the formal dining room.

The jellyfish-inspired bubble chandelier is assembled from custom, hand-blown clear glass orbs. Measuring 60-by-32 inches, the assembly of strands hangs from a coffer of lights inside one of her signature organic ceiling trays.

Mullineaux also custom designed the dining table and base and the dining chairs finished in silver leaf and upholstered in white textiles woven with a blue coral pattern. A subtle play upon the palette is rendered in an original wall mural, painted in place by local artist Ellis Furst.

With her adult children now living in Charlotte, Richmond, and upstate New York, the wife wanted a home large enough to host her entire family under one roof. Some of her grandchildren were infants during their first visits. Now they range in age from 12 to 26.

“I wanted a place where we could make memories going forward, where the cousins could get to know one another,” she says. “That was so important to me.”

Each bedroom is completely different, with  its own unique personality and motif.

The master suite on the second floor commands stunning oceanfront views from its mahogany balcony finished with travertine floors. Throwing open the floor length sliding glass doors encourages deep breaths of healthy, salt-laden air. Inside, the floorplan is a study in vestibules, with the master bath looking over the sitting area that opens to the bed chamber.

The master suite and five additional themed bedrooms — including an antique homage to a grandmother — were inspired by celebrated coastal getaways. As you step into each room, it’s as if you are stepping into a bedroom in the Bahamas, or Tahiti or Nags Head.

“The bedrooms are artistically creative and imaginative,” Mullineaux says. “If the whole house was the same, it’s not as playful. When family and friends come to visit, they want to feel like they’re on vacation.”

Design elements like woven grass cloth, bamboo rattan and painted beadboard are inspired by bedding and furnishings, reprised in customized ceiling treatments, finishes and fixtures, and in the custom cabinetry of en suite bathrooms.

“In the bamboo bedroom every piece of bamboo had to be cut, tapered to custom fit adjacent bamboo, pre-drilled and then fastened in place,” Lanphear says. “As a joke, we put a temporary ‘mailbox’ outside the bedroom door for the master carpenter installing it, due to the amount of time it was taking.”

Second floor amenities also include a sunset lounge. Commanding views to the north, west and south across the sound, the room is aptly named. It’s an open gathering area furnished with a large sectional sofa, barstools and ample counter space lined with laptop computers and framed memento photos. One floor below the media room, with its plush round seating and a pop palette of chartreuse and lavender anchored with shades of blue, is reminiscent of a 1960s crash pad.

“This house is all about family, kids and grandchildren. It’s a house built with love, joy, fun and laughter, to be enjoyed by all for many years to come,” Mullineaux says.