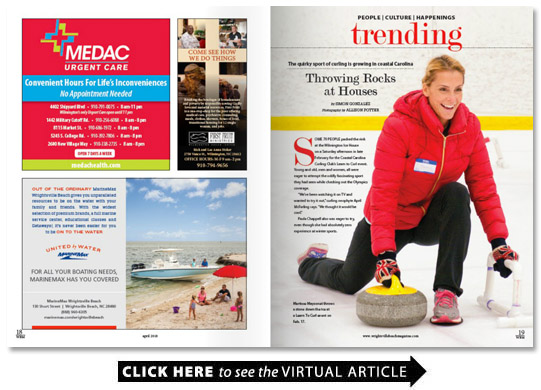 Some 70 people packed the rink at the Wilmington Ice House on a Saturday afternoon in late February for the Coastal Carolina Curling Club’s Learn to Curl event. Young and old men and women all were eager to attempt the oddly fascinating sport they had seen while checking out the Olympics coverage.

“We’ve been watching it on TV and wanted to try it out ” curling neophyte April McFarling says. “We thought it would be cool.”

Paula Chappell also was eager to try even though she had absolutely zero experience at winter sports.

“I’ve never even been on ice before ” she says.

Jason Allen can relate. He was one of the newbies four years ago captivated by the strange game involving big round stones and brooms and where seemingly regular Joes slide around on ice and win Olympic medals through skill finesse and strategy rather than athletic prowess.

“I had no idea what it was until I saw the Olympics ” he says.

The idea is to slide your rocks — which weigh about 40 pounds each — 150 feet down the ice and get them closer to the house or target than the other team’s rocks. The rock is released by a shooter who then barks commands at a couple of teammates with brooms.

“It’s weird and fascinating ” Allen says. “Why are you sweeping a rock on ice? Why are there no skates? What’s with the yelling? Why is it called chess on ice?”

Allen is now the Learn To Curl committee chair for the Coastal Carolina Curling Club responsible for scheduling events like the one in February. There were a couple in March and three are planned for April. All should attract about 70 people who want to take a turn throwing rocks at houses.

“Generally it’s a bucket-list thing ” Allen says. “They just want to try it.”

What they are trying is an ancient sport that dates back to the 16th century but one that because the prerequisite is ice was very much a winter sport restricted to northern climes for most of its history.

Curling originated on frozen lochs in Scotland in the early 1500s. It made its way to the United States in the mid-1800s. The advent of indoor rinks helped it grow but it remained a niche regional game until 1998 when it became a medal event at the Nagano Olympics.

Television coverage introduced the sport to new audiences who watched and became curious. Popularity spiked during the Vancouver Olympics in 2010 when curling matches made it into primetime on one of NBC’s cable affiliates.

The United States Curling Association capitalized on the increased interest. Visitors to its website were encouraged to seek out a local club and give it a try.

Someone wrote to the USCA inquiring about a club in the Wilmington area. The message was forwarded to Topsail Beach resident Dick Macartney a charter member of the Triangle Curling Club in Raleigh and then the vice president for growth and membership with the Grand National Curling Club the regional organization for the Eastern U.S.

Dick and his wife Charlotte convened a meeting with a handful of others and drew up the charter for the Coastal Carolina Curling Club. With four borrowed rocks and some old brooms the new organization conducted the first Learn To Curl at the Ice House in June 2011.

Rick Crowell was on the ice that day. He had seen curling on TV and thought “it looked neat ” but it was seeing it in person that made him want to try it.

“We went to Vancouver and sitting with a bunch of Canadians who were pretty much just rabid was exciting ” he says. “There was a lot of adrenaline flowing in the stands. They went out of their way to answer any questions a bunch of stupid Americans had. We got into it from that.”

Tony Jacobs is another of the original club members drawn to the sport after Vancouver. He’s happy to explain how it works and just what in the heck those people with the brooms are doing.

“It’s called curling because you put a little bit of spin on the rock and it curls as it goes down the ice ” he says. “The sweeping is done for two reasons. One is because the skip has a line he wants the rock to follow. If it’s offline a little bit he’ll want them to sweep to keep it on line. The other reason is the two sweepers try to judge the weight how fast it’s going and if it’s right for the shot that’s been called. If it’s light and they think it’s not going to get there they sweep it to carry it further. They’ve actually done studies to see how far high-powered sweepers can drag a rock. It can go an additional 15 feet.”

Most of the Wilmington curlers credit the Olympics for their interest. Vancouver in 2010 Sochi in 2014 and now PyeongChang where the U.S. men won gold.

“I started four years ago during the Sochi Olympics ” Barry Lantz says. “We had seen it on TV and it just looked cool. We found out there was curling here and said ‘Hey why not give it a shot?’ My wife got me curling lessons for a Valentine’s Day present. We came out there were 60-70 people on the ice and just got hooked.”

Lantz soon discovered that the sport is a lot harder than it looks when watching the best in the world on TV.

“It’s just like in golf. I can teach you how to hit the ball but to make it go where you want is something else ” he says. “It’s an easy game to learn but getting the finesse is hard. And the strategy is very complicated. You knock other people’s stones out of the house and get yours in the best position. It’s a challenging sport.”

The quirky game can immediately look cool when someone sees it for the first time. For others it’s an acquired taste.

“The first couple of times I saw curling in the Olympics I thought ‘This is stupid. What are these people doing?”’ says Mike Crum a recent addition to the club. “But then I kept watching it and it was intriguing. There’s a lot of skill involved and it’s like a chess match. Both my wife and I were interested. When we saw that there was a curling club here and they did a Learn To Curl we signed up to check it out. It’s fun. It’s not something that everybody does.”

Allen did his Learn To Curl after the Sochi Olympics and quickly got hooked. So much so that you wouldn’t want to compete against him if there were such a thing as fantasy curling.

“I follow it like a lot of people follow football ” he says. “There is a world tour. Each country has their own championships. There’s worlds there’s the Olympics. There’s teams and there’s free agents. You can actually really follow the sport like you can follow any of the major sports here.”

The Wilmington curlers tend to be Southerners who are relatively new to the sport rather than snowbirds who brought the sport with them.

“It’s not something that’s common in the Southern states ” she says. “I like the strategy. It’s definitely like chess on ice. I like the competitiveness. We have all walks of life. I’m a student I ride horses. We have a dentist we have architects we have retirees. We have people from all walks of life come out here for curling.”