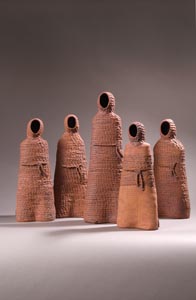 When a potter places his/her thumbs into a rich slab of North Carolina clay they become part of more than the formation of a bowl. In that moment they become part of the states oldest and most well-known cultural art set into motion at least 3 000 years ago by the Native American Cherokee and Catawba tribes. With each firm press of her hands the potter furthers the evolution of this creative process which began as a means of survival but exists now as an artistic profession and hobby.

North Carolina is known for its clay from the coastal iron-infused blue clay found on Wilmingtons Blue Clay Road to the rich red mud found in the Piedmont. For generations prior to European settlement Native Americans were drawn to the fine water-washed clay along streambeds using it to make thick utilitarian pots.

Today many potters are drawn to Seagrove North Carolina a town of less than 300 people near Asheboro that is home to at least 90 potteries (in a 20-mile stretch) and to many eighth- and ninth-generation potters who display and sell their work at art craft and pottery festivals held year-round. 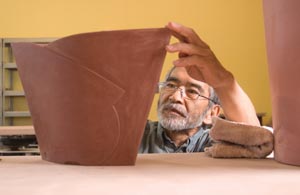 Seagrove was also the home of master potter Hiroshi Sueyoshi. The potter moved to Wilmington in 1978 worked as an artist-in-residence at Cape Fear Community College (CFCC) until 1980 and then became a CFCC instructor until 2007 when he began working with potters at Cameron Art Museum. A native of Japan Sueyoshis friendship with an American couple brought him to the Seagrove area in 1971 to help build Humble Mill Pottery. He went on to work with Seagrove Pottery as a production potter and then with Sampson Community College in Clinton as a pottery instructor. He has also worked as a visiting artist at Wilson County Technical Institute and at Cape Fear Community College in a program sponsored by the North Carolina Arts Council.

Sueyoshis international training in pottery which is more strictly taught and more highly regarded in Japan is a treat to the students he now instructs at the museum where he works as an artist-in-residence. Because of Japanese potters advanced skill level and disciplined attention to detail their pottery has become an iconic model and influence for many American potters. Though Sueyoshi also makes what he calls “functional” pieces cups bowls and dishes created to be used the majority of his work is decorative fine art. 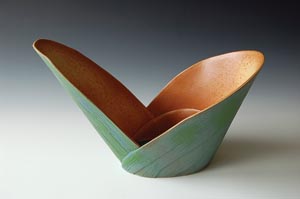 His relationship with Orange Street Pottery a Front Street gallery where local potters commune to sell their work is what inspired Sueyoshi to start the Coastal Carolina Clay Guild in 2007. It “just felt natural ” he says given the growing community of potters he was getting to know through his collaboration at Orange Street.

For the guilds first meeting treasurer Brenda Thomas says she expected 10 to 15 people to show up. At least 50 came. Now 94 members strong the club is a mixture of hobbyists (those who throw clay on the weekend) and professionals (those who make a living selling their work) who hail from as far north as Jacksonville North Carolina and as far south as Charleston South Carolina.

“The love of clay is what brings us all together the idea of making something so beautiful thats formed from the earth ” says Thomas. “Its something you can use and enjoy.” The club membership fee is $15 and guarantees admission to meetings every other month a smattering of studio workshops and participation in the groups bi-yearly pottery sales. Sueyoshi schedules a speaker for each meeting and many have been nationally-known potters or pottery collectors who bring their collections with them.

“Its a show and tell sort of thing ” Sueyoshi says “because usually to see a good collection you have to go to a big city.”

“We needed a guild here for so long ” says Sybil West a Wrightsville Beach potter co-owner of Port City Pottery and Fine Crafts and former employee of Fat Cat Pottery. “When we found out the people at Orange Street had a 501(c)(3) already we joined them.”

West uses hand-building and wheel-throwing techniques to create porcelain and stoneware vases and what she calls “watchers”imaginative two-to-three-foot-tall decorative figurines. Though she worked as a pottery instructor in Virginia before moving to the area nine years ago joining the guild has continued to expand her artistic perspective and ceramic repertoire. 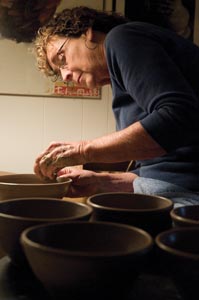 “People were doing things with clay and glazes that I had not done ” West says. “The guild is a place to share ideas.”

These ideas include suggestions for where to find the best clay what combination of glazes and firing produces the best result and how to market ones work. Blue clay found on rural Blue Clay Road in Wilmington has become a source of pride for local potters but few have the time to devote to digging it. Once its located and shoveled it still has to be sifted in order to remove rotten leaves or trash it has acquired over time. Despite the trouble Thomas keeps a small supply of it in her home studio a shed behind her house. Its nice to have it on hand if inspiration calls.

“Its beautiful clay full of iron ” Thomas says. “When it comes out of the ground its this deep blue but when you fire it it turns bright orange because of the iron.” For those who arent interested in digging their own clay it can be ordered through a pottery supply store like Fat Cat Pottery in Wilmington. These stores are also a go-to for ceramic shaping tools and decorative glazes a glassy coating applied for protection and color.

Some of the larger equipment like a potters wheel or a firing kiln can usually be acquired through networking within the guild. A potters wheel is a contraption that consists of a stick or foot-pedal or electric powered turntable. A ball of clay is “thrown” onto the moving-rotating turntable and a potter presses the clay downward and inward using centrifugal force in a process called “centering.” As the clay becomes more symmetrical the potter presses her thumbs into the center to open up a hole this will become the bottom of the cylinder. She uses her fingers to guide the formation of the walls rising up from the hole the sides of the pot. Once a shape is created she uses trimming and shaping tools to shave off any excess clay that would make the sides of the pot inconsistently thick. A wheel is usually a quicker approach than hand-building where a potter shapes the clay into coils or flattened slabs and connects the pieces with slip a mixture of water and clay.

When it comes to firing or the heating and hardening of the ceramic piece to create a finished product a potter has to balance several considerations: temperature technique and the power source of the kiln or furnace. A wood-fired kiln one of the oldest types used can lead to a more abstract finish than a cleaner electric-powered or gas kiln. Raku firing an ancient Japanese tradition is an especially eclectic and popular approach. It involves removing the ceramic piece from the fire while it is still hot in order to create a chemical reaction and smoky decorative effect. The Western adaptation of this tradition calls for smothering the still-hot piece in combustible materials ashes woodchips pine needles or leaves that will then produce carbon and stain the pot. Some pieces undergo one firing; others are fired multiple times until the desired effect is achieved. Depending on the size complexity and design it generally takes about two to three weeks to create of piece of pottery says Sueyoshi.

Given all the variables involved the combinations of clay glaze and firing its no wonder that the guild has become a much-needed avenue of information-sharing for its members. For West its the ultimate example of community.

“We all do better in living when we have community ” she says “when we have like-minded people surrounding and supporting us.”

The Coastal Carolina Clay Guild will host a pottery show in Seagrove North Carolina in August and is working on establishing its first scholarship which would support a student wishing to attend craft school. For more information contact the guild at
www.coastalcarolinaclayguild.org.