Throw Another Shrimp on the Skillet! 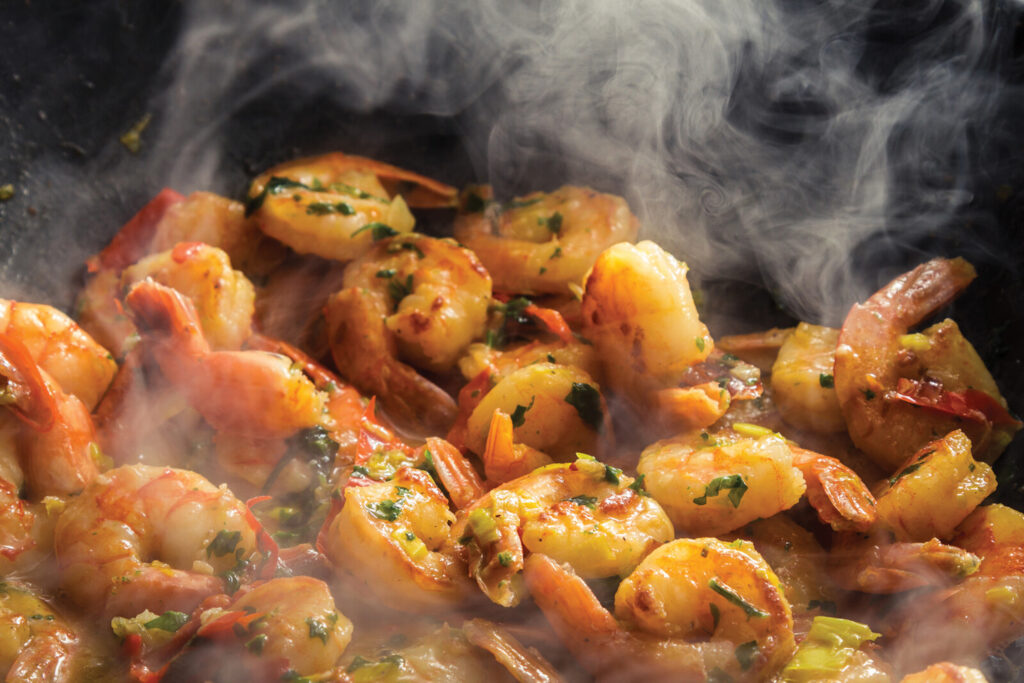 For those who were raised at the coast or had the opportunity to visit on a regular basis, the summertime is likely to conjure memories of a fresh shrimp cocktail or fried popcorn shrimp, especially in Brunswick County. A partial explanation for this is that, traditionally, the only time local shrimp could be harvested was in summer or fall.

Three main types of shrimp are caught in North Carolina: pink, white and brown. Brown shrimp are by far the most common, accounting for nearly 70 percent of the total catch.

As with the other varieties, brown shrimp are spawned in the ocean and then carried by the winds and tides into coastal estuaries, where they are primarily harvested by trawlers.

The first recorded instance of shrimp trawling dates to 1376, when the king of England received a written request asking to ban the practice due to its destructiveness. Similarly, the Dutch banned shrimp trawling in coastal estuaries in 1583.

Modern criticisms of shrimp trawling, which involves towing a large net along the bottom of the seafloor, cite the significant amount of bycatch, the incidental catch rate of other species. Though shrimp trawling accounts for approximately 2 percent of the weight of fish caught worldwide on an annual basis, the practice is responsible for a third of the yearly bycatch.

There is a seemingly endless, insatiable demand for these tasty crustaceans. They are valued as a dietary staple, not only for people but also for crabs, sea urchins, sharks, seahorses, dolphins, whales and seabirds. As a response to the demand, shrimp farming took root in the 1970s, outpacing production from shrimp trawling by 2007.

It may seem obvious that shrimp farming eliminates the problem of bycatch, but as with many systems created by man, it has produced unintended, negative consequences. Most of these stem from chemicals, organic waste and antibiotics seeping into groundwater and coastal estuaries.

When managed effectively, shrimp farms can help to satisfy demand and it is a burgeoning industry in North Carolina. A shrimp farm can be established on as little as an acre of land and can even be done indoors in small tanks, allowing for tighter control on the variables that can cause problems when farming outside.

With the belief that wild caught seafood simply tastes better, and over 12,000 miles of coastline in our state’s estuaries, it’s unlikely the practice of trawling will ever abate. But as more people seek to become entrepreneurs and leverage farming skills that have been passed down through the generations, it is not inconceivable to imagine a future where North Carolina farms are producing large amounts of fresh shrimp.

Regardless of where they come from, shrimp are a healthy source of nutrition. Not only are they high in protein and low in calories, shrimp provide a range of healthy fats, minerals and vitamins. A bonus is that shrimp are among the most versatile of all meats, capable of taking on an array of flavors and tastes.

Considering the nutrition benefits and the many tasty ways they can be prepared, it’s difficult to imagine the demand for these crustaceans will ever subside. Those with school-aged children who worry that these tasty bottom-dwellers will go extinct because of their high rate of consumption have no reason to fear, as the combination of farming, trawling and their high rate of reproduction will ensure they remain a viable food source into the future.

This dish is very tasty when prepared in a cast iron skillet. Start by tossing peeled shrimp with paprika, ancho chili powder, cumin, salt and a bit of sugar. Next, melt five tablespoons of butter in a large skillet. Keep the heat low to medium while adding minced garlic and continue until the shrimp are almost done. Add some lemon juice or chunks, Worcestershire sauce and water. When the shrimp is done, add thinly sliced green onions and serve over rice.

Made popular in the small Brunswick County town that bears the same name, these lightly fried shrimp are first coated with a batter made from self-rising flour, garlic salt, black pepper, and paprika. After the shrimp are battered, place them in a hot cast iron skillet with canola oil filled to a depth of about 2 inches. Cook for around two to three minutes, turning as necessary.

Toss asparagus and shallots with olive oil and salt. Arrange on a sheet pan with chicken sausage and roast for 10 minutes. Add shrimp to the pan, season everything with Old Bay and a little salt and pepper, and continue baking for 7 minutes. Serve with a side of lemon aioli.

This literally translates to angry shrimp, because it can be spicy. Start by sautéing shrimp with salt, pepper and olive oil in a heated skillet. Remove the shrimp, then cook onions, garlic and crushed red pepper in the same pan. Add basil and tomato sauce, simmer until the flavors are combined, then add the shrimp back in along with cooked pasta and simmer for a few more minutes.

Start by creating a marinade of olive oil, cilantro and parsley, garlic, lemon juice, cayenne pepper, and salt and pepper. Mix in fresh or thawed shrimp, cover and place in fridge for at least 30 minutes (overnight is better). Thread skewers through the shrimp, brush more marinade on each side, and grill for two to three minutes on each side.

A classic Southern staple, this dish can vary as much from region to region as barbecue. Heat a large skillet to medium and add bacon. Cook until crisp, and add fresh raw shrimp. Sprinkle with Cajun spice and salt. When the shrimp are almost done, set the mixture aside, put the skillet back on the heat and add butter. Mix in green onions, celery, green pepper and garlic, sauté for four minutes and then add flour, mixing until well blended. Add chicken broth, Worcestershire sauce and hot sauce and bring to a boil. Reduce heat and simmer until the sauce thickens, then set aside. Make the grits as normal, then return the sauce mix and shrimp to the stove. Simmer over medium while blending the shrimp, bacon and sauce, then serve over grits.