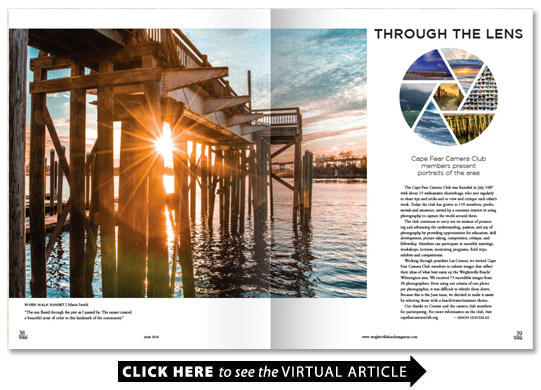 The Cape Fear Camera Club was founded in July 1987 with about 15 enthusiastic shutterbugs who met regularly to share tips and tricks and to view and critique each other’s work. Today the club has grown to 150 members professionals and amateurs united by a common interest in using photography to capture the world around them.

The club continues to carry out its mission of promoting and advancing the understanding passion and joy of photography by providing opportunities for education skill development picture taking competition critique and fellowship. Members can participate in monthly meetings workshops lectures mentoring programs field trips exhibits and competitions.

Working through president Les Conner we invited Cape Fear Camera Club members to submit images that reflect their ideas of what best sums up the Wrightsville Beach/Wilmington area. We received 73 incredible images from 38 photographers. Even using our criteria of one photo per photographer it was difficult to whittle them down. Because this is the June issue we decided to make it easier by selecting those with a beach/water/summer theme.

Our thanks to Conner and the camera club members for participating. For more information on the club visit capefearcameraclub.org.

“The sun flared through the pier as I passed by. The sunset created a beautiful array of color to this landmark of the community.”

“A low tide sunrise exposes the coquina rocks at Fort Fisher. Photographed with a slower shutter speed to give a surreal look to the image.”

“In 2014 I started a personal project titled ‘Same View Different Day’ and the challenge was to capture the beauty of my backyard. See What I See is just one view of sunrise I’m privileged to witness every morning.”

“My family was out on the boat behind Figure Eight Island enjoying a day on the water. We watched as the dark line of a thunderstorm approached from the west. At the first lightning bolt everyone prepared to weigh anchor. Everyone except me� I went to the stern with my camera.”

“It was around 2 a.m. on a very windy night in August 2016 and I was determined to capture the Perseid meteor shower. Like many others a teenage boy also wanted to enjoy the magic. As he walked up to the lifeguard stand his LED bike tires came into my frame leaving a light trail. I ran up to him showed him the photo and told him we were both in the right place at the right time! I merged eight photos together to create the final image.”

Swingin’ by the Pier | Warren Overman

“Though it looks very summeresque it was taken on an unusually warm day in February 2016. I spotted this one guy in his hammock enjoying the afternoon sun. For me being able to enjoy this kind of weather in the middle of winter makes this area all the more attractive.”

Up Up and Away | Macky Miller

“A rare and glorious February day brought people to the south end of Wrightsville Beach. As I looked out over the ocean I had only one overwhelming thought: ‘Life doesn’t get any better than this!'”

“I was out taking pictures of the inlet near Shell Island early in the morning when I came across a single surfer. To my surprise when he came to shore he was a senior and said he had been surfing Wrightsville Beach for almost 50 years! ‘Old dudes rule’ I thought as I watched him walk away.”

“The Dawn Surf Patrol has been a tradition for many years at Wrightsville. Local long boarders meet at Mason’s Inlet to catch the early morning glassy swell. Growing up on the beach and surfing in the 60s I remember many many mornings just like this.”

“This image is from the Wings Beachwear Store in Wrightsville Beach. This particular sunglasses image represents the fact that sun is very important to the beach industry and one does need to be careful of too much sun.”

“This shot was taken on Jan. 31 2018. It was a Super Blue Blood Moon which had not occurred since December 1982. Knowing this was a particularly special lunar occurrence I looked for a place with an interesting and somewhat unique foreground. The image was taken from Airlie Road looking northwest over Motts Channel.”

“It was created very early in the morning from Causeway Park using my trusty Canon 5D Mark III. The stillness and calm were achieved by keeping the shutter open for 73 seconds with a 10-stop neutral density filter. There was very little post-processing. Pretty much everything I was trying for was captured ‘in-camera.'”

“Johnnie Mercer’s Pier is a Wrightsville Beach landmark that I photographed just after sunrise in March of 2014. The photo is a composite of five images blended together for increased tonality and texture. My intention was to capture the still morning ocean with the textures in the sky and pier.”

“This [swan] couple has lived on Landfall Lake for a number of years and raised several broods of cygnets there. This shot was taken as they swam towards each other and dipped into the water for a bite at a perfect time.”