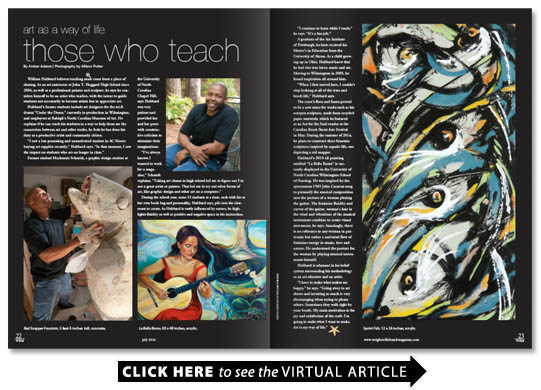 Art as a Way of Life

William Hubbard believes teaching must come from a place of sharing. As an art instructor at John T. Hoggard High School since 2006 as well as a professional painter and sculptor he says he considers himself to be an artist who teaches with the intent to guide students not necessarily to become artists but to appreciate art.

Hubbard s former students include set designers for the sci-fi drama  Under the Dome   currently in production in Wilmington and employees at Raleigh s North Carolina Museum of Art. He explains if he can reach his students in a way to help them see the connection between art and other trades he feels he has done his duty as a productive artist and community citizen.

I saw a less promising and unmotivated student in AC Moore buying art supplies recently   Hubbard says.  In that moment I saw the impact on students who are no longer in class.

Former student Mackenzie Schmidt a graphic design student at the University of North Carolina Chapel Hill says Hubbard was very patient and provided her and her peers with constructive criticism to stimulate their imaginations.

I ve always known I wanted to work for a magazine   Schmidt explains.  Taking art classes in high school led me to figure out I m not a great artist or painter. That led me to try out other forms of art like graphic design and other art on a computer.

During the school year some 33 students at a time each with his or her own book bag and personality Hubbard says pile into his classroom to create. As Hubbard is vastly influenced by nature he highlights fluidity as well as positive and negative space in his instruction.

I continue to learn while I teach   he says.  It s a fun job.

A graduate of the Art Institute of Pittsburgh he later received his Master s in Education from the University of Akron. As a child growing up in Ohio Hubbard knew that he had two true loves: music and art. Moving to Wilmington in 2005 he found inspiration all around him.

When I first moved here I couldn t stop looking at all of the trees and beach life   Hubbard says.

The coast s flora and fauna proved to be a new muse for works such as his octopus sculpture made from recycled paper materials which he featured as an Art for the Soul vendor at the Carolina Beach Street Arts Festival in May. During the summer of 2014 he plans to construct three fountain sculptures inspired by aquatic life one depicting a red snapper.

Hubbard s 2010 oil painting entitled  La Bella Roma  is currently displayed in the University of North Carolina Wilmington School of Nursing. He was inspired by the eponymous 1965 John Cacavus song to personify the musical composition into the posture of a woman playing the guitar. The feminine fluidity and curves of the guitar woman s hair in the wind and vibrations of the musical instrument combine to create visual movement he says. Amazingly there is no reference to any woman in particular but rather a universal flow of feminine energy in music love and nature. He understood the posture for the woman by playing musical instruments himself.

Hubbard is adamant in his belief system surrounding his methodology as an art educator and an artist.

I have to make what makes me happy   he says.  Going away to art shows and investing so much is very discouraging when trying to please others. Sometimes they walk right by your booth. My main motivation is the joy and satisfaction of the craft. I m going to make what I want to make. Art is my way of life.