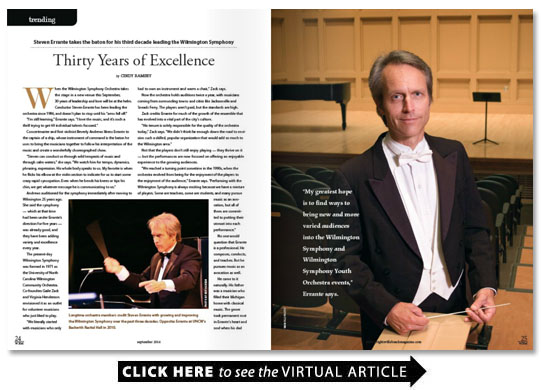 When the Wilmington Symphony Orchestra takes the stage in a new venue this September 30 years of leadership and love will be at the helm. Conductor Steven Errante has been leading the orchestra since 1986 and doesn’t plan to stop until his “arms fall off.”

“I’m still learning ” Errante says. “I love the music and it’s such a thrill trying to get 60 individual talents focused.”

Concertmaster and first violinist Beverly Andrews likens Errante to the captain of a ship whose instrument of command is the baton he uses to bring the musicians together to follow his interpretation of the music and create a wonderfully choreographed show.

“Steven can conduct us through wild tempests of music and through calm waters ” she says. “We watch him for tempo dynamics phrasing expression. His whole body speaks to us. My favorite is when he flicks his elbow at the violin section to indicate for us to start some crazy rapid syncopation. Even when he bends his knees or tips his chin we get whatever message he is communicating to us.”

Andrews auditioned for the symphony immediately after moving to Wilmington 25 years ago. She said the symphony — which at that time had been under Errante’s direction for five years — was already good and they have been adding variety and excellence every year.

The present-day Wilmington Symphony was formed in 1971 as the University of North Carolina Wilmington Community Orchestra. Co-founders Gaile Zack and Virginia Henderson envisioned it as an outlet for volunteer musicians who just liked to play.

“We literally started with musicians who only had to own an instrument and warm a chair ” Zack says.

Now the orchestra holds auditions twice a year with musicians coming from surrounding towns and cities like Jacksonville and Sneads Ferry. The players aren’t paid but the standards are high.

Zack credits Errante for much of the growth of the ensemble that has evolved into a vital part of the city’s culture.

“His tenure is solely responsible for the quality of the orchestra today ” Zack says. “We didn’t think far enough down the road to envision such a skilled popular organization that would add so much to the Wilmington area.”

Not that the players don’t still enjoy playing — they thrive on it — but the performances are now focused on offering an enjoyable experience to the growing audiences.

“We reached a turning point sometime in the 1990s when the orchestra evolved from being for the enjoyment of the players to the enjoyment of the audience ” Errante says. “Performing with the Wilmington Symphony is always exciting because we have a mixture of players. Some are teachers some are students and many pursue music as an avocation but all of them are committed to putting their utmost into each performance.”

No one would question that Errante is a professional. He composes conducts and teaches. But he pursues music as an avocation as well.

He came to it naturally. His father was a musician who filled their Michigan home with classical music. The genre took permanent root in Errante’s heart and soul when his dad took him to New York to see the Metropolitan Opera. The production featured stars like Leontyne Price. Although Errante was just in third grade the music hooked him.

Errante started composing while still in high school. He garnered great support and encouragement from music teachers who recognized his gift and used his compositions and arrangements for their orchestras and choruses. By the time he graduated from high school his music was being performed by professionals.

At the University of Michigan where he earned bachelor’s and master’s degrees Errante majored in composition and orchestral conducting.

“The only way to express my love of symphonic music and opera was on the podium ” Errante says.

He completed his doctorate at the Juilliard School in New York City and has been teaching and conducting ever since.

Errante didn’t necessarily plan to stick around for the next 30 years when he and his wife Sandy arrived in town in 1986. He could have used the position to gain experience establish a reputation and then move on to a bigger orchestra in a larger town. Instead the Errantes put down deep roots. Their two daughters Emmy and Casey were born and raised here. Wilmington is home.

“Wilmington has always been ideal for me and my family ” Errante says. “It’s a small town with big-town cultural offerings. We also enjoy the natural setting where we can take walks at Carolina Beach State Park or paddle our kayaks on the Black River or to Masonboro Island.”

His wife and daughters are avid surfers but Errante says he is “more of an occasional surfer and the perpetual beginner in the family.”

The Errantes have given much of themselves to the artistic culture of the city. Steven is a professor of music at the University of North Carolina Wilmington. In addition to conducting the WSO he founded and conducts the Wilmington Symphony Youth Orchestra. Sandy founded the Girls’ Choir of Wilmington and has directed it for 20 years. Steven is the accompanist for the choir. The Wilmington Symphony Junior Strings is a more recent addition and is conducted by Jane Tierney.

“We now have people covered from sixth grade into their 70s ” Errante says.

As he approaches his 30th season on the conductor’s podium Errante is looking forward rather than backward.

“My greatest hope is to find ways to bring new and more varied audiences into the Wilmington Symphony and Wilmington Symphony Youth Orchestra events ” Errante says. “We’re trying to think creatively about how to create more encounters between the musicians and the public.”

The Wilmington Symphony is not a professional orchestra that performs the same program through a series of concerts so each performance is unique.

“The Wilmington Symphony has just one chance to get it right ” Errante says. “I nearly always choose works that I haven’t conducted before so it truly feels like the once-in-a-lifetime experience that it is.”

Andrews concurs. She says that Errante is a master programmer choosing pieces that will touch the audience in many different ways.

“Anyone who loves a lot of big beautiful sounds will hear something that will touch their soul at each concert ” Andrews says.

The concerts on the 2016-17 calendar will be performed at a new venue. After playing on the UNCW campus since its founding the orchestra is moving to the Wilson Humanities and Fine Arts Center at Cape Fear Community College.

“We are looking forward to ‘taking it downtown’ this fall ” Errante says. “It has an orchestra shell specifically designed to bring out the best sound for groups like ours and the amenities for both audience and players are wonderful.”

WSO executive director Reed Wallace is excited about the future of the orchestra and its move to a new larger location downtown which he says is quickly becoming the center of performing arts with audiences coming from Brunswick County and surrounding areas.

“The strength of the organization is continuous improvement and continuity of musicians ” Reed says. “Steve’s leadership keeps people coming back.”

After 45 years with the orchestra she helped found Zack recently retired from playing knowing it is in good hands.

“WSO has far surpassed any dreams I had 45 years ago.” Zack says. “I can remember a revelation I had some years ago feeling extraordinarily happy at realizing that if I dropped dead right then the orchestra would successfully continue right on without me without missing a beat.”

And that is Errante’s goal — to lead the orchestra focusing and unifying the extraordinary talent of 60 musicians as long as he has arms.

The 2016-17 season begins September 17 with a program called Four Centuries of Orchestra Music.