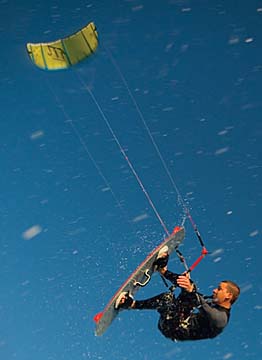 Kiteboarding is one of the fastest-growing water sports ” says Hunter Brown owner of Blowing in the Wind in Wrightsville Beach. Brown bought the store in 2000 and added equipment for and education about kiteboarding. “We’ve been doing it since the beginning and have been a part of the evolution of the sport. It’s evolved very very rapidly and we’re glad that we’ve been along for the ride as it’s progressed.”

Kiteboarding can be considered a sibling to windsurfing and a grandchild to surfing itself. Though it’s the newest kid on the block in a family of extreme sports including skateboarding and snowboarding there isn’t anything new about using kites to move objects over land and sea or what we call in the physics lab advanced wind propulsion.

As far back as the 12th century Polynesian and Chinese fishermen had figured out a way to make kites move their canoes a little quicker than the fish. By the 1800s kites were being used to propel both carts and boats. In 1977 a Dutchman Gijbertus Adrianus Panhuise received the first patent for what would evolve into today’s extreme sport of kiteboarding though many would consider later patents to be of greater significance in the development of the sport — the development of the inflatable kite for example or the modern harness gear.

At last count two years ago the kiteboarding community had risen to between 150 000 and 200 000 riders nationally with a couple of professional organizations — the Professional Kiteboard Riders Association (PKRA) and the International Kiteboarding Organization (IKO) — sponsoring a host of prize-winning events. Increased sophistication in the design of kites boards and the harnesses that keep those kites in the hands of riders has led to increased interest in the sport. According to Brown when he bought his business eight years ago you could count local riders on a single hand (or two). Today Brown estimates you’d need 10 hands.

Throughout this kiteboarding community from Maui to Wrightsville Beach there is an almost universal concern for safety — not only for the riders themselves but for the people with whom these riders share a beach. Safety concerns have led to restrictions on the sport in many areas and local riders are anxious to ensure that such restrictions don’t happen here.

“Currently ” writes Brown in his preface to a 24-item list of Rules To Ride By available on his Web site www.gokitesurf.com “there are no official restrictions on kiteboarding in the Cape Fear area and we want to keep it that way.”

Potential newcomers to the sport should recognize that they’re putting themselves out on the open water with a very powerful tool in their hands — a wind-catching machine so to speak. It’s simple and easy enough to use if you know what you’re doing but like a circular saw it’s one that demands your full attention and respect.

“The first thing you need to do ” says local professional rider Tony Delcato “is learn how to fly a kite and learn how to fly it very well without even looking at it. From there it’s just a matter of developing natural skills.”

Delcato who grew up in the Wilmington area is a veteran of many extreme sports. Though he had gotten away from kiteboarding for a number of years when work responsibilities interfered he is currently considering a few offers of sponsorship from kite companies (and one soft drink company) to head out onto the water again.

Delcato says while there is a certain amount of training and education involved with taking up the sport it’s not all that difficult.

“There are quite a few people in the area who have learned ” he says. “I had a girlfriend who’d never done anything like it before and after I took her out there she ended up being pretty good.”

That girlfriend Jennifer Royall was skeptical at first. “I’d never really considered myself to be an athlete ” she recalls “but I said I’d give it a try.”

She also told Delcato Brown and another local female rider Jackie Fisher who all helped her learn that while she was quite willing to try it on land she wasn’t about to go into the water with one of the kites a decision she had occasion to rethink. From her first experiences with a training kite Royall moved on to being propelled on a land board and finally did get into the water.

“The land board is much scarier ” she says. “Falling in the water doesn’t hurt as much as falling on the ground. I would say the biggest thing that surprised me was that [the kite] was powerful enough to pull me around. I had to use my body weight against the kite. Even the training kite had a good deal of power.”

Royall recommends that people not go into the sport without formal training. While today she and others can avail themselves of training classes back then she was dependent on the knowledge experience and skill of a very small group of local kiteboarders.

“I was so fortunate to be surrounded by what became a group of friends ” she says. “There is such a wonderful community of people who do it around here.”

As it turns out coastal North Carolina is a good place for the sport especially the Wrightsville and Carolina Beach areas.

“We have such a good thermal (sea breeze) that kicks in every day ” says Delcato. “Pretty much every day around 1 o’clock.”

Wind of course is central to the kiteboarding experience. Thanks to Chris Marshall an ex-WECT weatherman and kiteboarder local riders can check the winds at the beach before they load up their equipment and head on out to the water. Marshall set up a Web site (www.surfchex.com) that in addition to providing current wind and weather conditions employs four beach cameras to give riders a visual sense of the waves and wind they’ll be facing when they get there. The footage from these cameras located at the Oceanic Restaurant in Wrightsville Beach the Kure Beach Fishing Pier Jeannette’s Fishing Pier in Nag’s Head and a site on Topsail Island has all the drama of a televised Yule log but it’s Masterpiece Theatre to local kiteboarders.

Due to liability issues kiteboarding is not a sport you can get into by renting the equipment. While training can be accomplished without expenditure beyond the lessons themselves you’re going to have to buy your equipment to get out onto open water. Prices will vary of course depending on such variables as kite and board size as well as the level of sophistication in the design of those items and the bar/harness gear you’ll need to purchase.

A quick glance at available kiteboarding equipment will demonstrate that while kites can be purchased for under $600 (rarely and often these are used and/or demo models) they’re more likely new to be in the $1 300 to $1 500 range. One of the variables involved is the kite’s size measured in square meters from as small as three to as large as 20 (average is in the 12-14-square-meter range; larger kites will work under reduced wind conditions). The same is true with boards which depending on the size and level of sophistication can cost between $500 and $700.

“I spent about $1 200 ” says N.C. State student Brandon Hester noting that he’d bought something of a “bargain package” and that average prices are more in line with the figures above.

Kiteboarding lessons come highly recommended (and just shy of mandatory). A single lesson will take you through a training kite stage and eventually out onto the water. Subsequent lessons will afford you the opportunity to improve your water-based skills.

Hester calls kiteboarding the most satisfying of the extreme sports in which he has participated because it never becomes mundane. “The waves are always different and the wind is always different ” he says. “It’s never the same and it never gets old.”