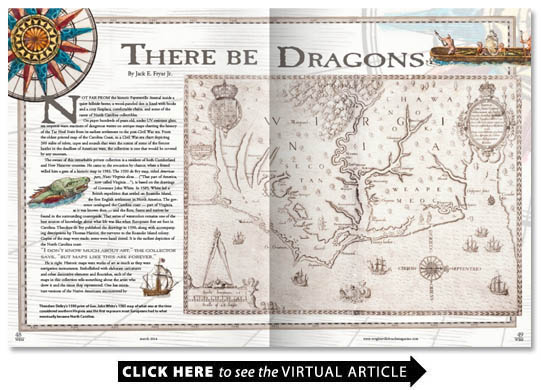 Not far from the historic Fayetteville Arsenal inside a quiet hillside home a wood-paneled den is lined with books and a cozy fireplace comfortable chairs and some of the rarest of North Carolina collectibles.

On paper hundreds of years old under UV-resistant glass sea serpents warn mariners of dangerous waters on antique maps charting the history of the Tar Heel State from its earliest settlement to the post-Civil War era. From the oldest printed map of the Carolina Coast to a Civil War-era chart depicting 300 miles of inlets capes and sounds that were the scenes of some of the fiercest battles in the deadliest of American wars the collection is one that would be coveted by any museum.

The owner of this remarkable private collection is a resident of both Cumberland and New Hanover counties. He came to the avocation by chance when a friend willed him a gem of a historic map in 1983. The 1590 de Bry map titled Americae pars Nunc Virginia dicta (That part of America now called Virginia) is based on the drawings of Governor John White. In 1585 White led a British expedition that settled on Roanoke Island the first English settlement in North America. The governor catalogued the Carolina coast — part of Virginia as it was known then — and the flora fauna and natives he found in the surrounding countryside. That series of watercolors remains one of the best sources of knowledge about what life was like when Europeans first set foot in Carolina. Theodore de Bry published the drawings in 1590 along with accompanying descriptions by Thomas Harriot the surveyor to the Roanoke Island colony. Copies of the map were made some were hand tinted. It is the earliest depiction of the North Carolina coast.

I dont know much about art the collector says but maps like this are forever.

He is right. Historic maps were works of art as much as they were navigation instruments. Embellished with elaborate caricatures and other decorative elements and flourishes each of the maps in this collection tells something about the artist who drew it and the times they represented. One has miniature versions of the Native Americans encountered by the Roanoke colony direct copies of the larger versions made by Governor White. Another boasts calligraphy made famous by the great cartographer John Speed during the era of Englands Stuart monarchy. Still another records Fayetteville landmarks of the early 19th century that no longer exist in the modern city.

Im still not a map expert by any means says the collector who supplements his collection with the help of antiquities dealers in New York and Tennessee. I just enjoy seeing for instance where one map maker made a mistake and it was picked up by another artist on another map. That sort of thing. He points to a lake roughly where Jacksonville Florida is today that is found on another later map. That lake never did exist! he says.

On the other hand on Governor Whites map he points to a great lake along the North Carolina coast. Thats Lake Mattamuskeet he explains. Its remarkable how accurate he was when he drew that. How in the world did he do that?

The names on the map often bear little resemblance to the place names found on modern maps. On the 1606 Hondius-Mercator map Cape Lookout is labeled as Cape Fear with the further warning that it is a Promontorium Tremendum or terrible cape. Cape Romain in South Carolina is drawn just to the south.

The collector is the proudest of a 1775 map of the Carolinas surveyed and drawn by Henry Mouzon. Printed in Londons American Atlas the map is in four sections each measuring roughly 20- by 28-inches.

The state archives got themselves a Mouzon and they were so excited the collector says. At the time they said South Carolina didnt have one. I dont know whether thats true or not but its what they were chortling about in Raleigh. So I went and got me a Mouzon.

All four panels of the map are on display in a huge frame that takes up a full half of the space dedicated to the map wall. The Mouzon map is notable for its detail depicting not just geographical features but also man-made landmarks like Quaker meeting houses plantations and other items of historical interest. That degree of detail makes the map relevant to modern scholars seeking information about the locations of historic places in the Carolinas from the colonial era.

Like many collectors the man who owns these historical treasures has more in his collection than he has wall space to display. One piece is an original US Army Engineer map of the 1865 battles at Averasboro and Bentonville during the Civil War clashes that were the last gasps of a Confederacy doomed to defeat. Three charts by Confederate blockade runner and commerce raider John Newland Maffitt detail the treacherous waters at the mouth of the Cape Fear River.

Maffitt was among the most successful of the Souths commerce raiders in part because it was his job to survey the waters around East Coast ports for the United States Coast Survey as an Army officer in the years before the war. The boy who had been born aboard ship en route to America from Ireland in 1819 was commissioned in the US Army as a lieutenant in 1842. Maffitt spent a great deal of time mapping the entrances and shoals of the Cape Fear River while based at Fort Johnston in modern Southport. He married a local woman and took up residence in Wilmington and Smithville (the Civil War era name for Southport). After the war broke out Maffitt became a naval aide to General Robert E. Lee and commanded a number of ships including the CSS Florida the ironclad CSS Albemarle and the blockade-runner Owl where he put his knowledge of coastal waters to use. As a Confederate officer Maffitt captured or destroyed 70 prizes valued at between $10 and $15 million (in Civil War dollars). The maps are tinted in soft pastel colors that bring out the delicate lines and notations of the charts detailing Frying Pan Shoals Old Inlet between Bald Head and Oak Islands and New Inlet opened by a colonial-era hurricane at the southern tip of New Hanover County.

Alexander Dallas Bache was the superintendent of the US Coast Survey in the years prior to the firing on Fort Sumter in 1861. Maffitt worked under his direction before choosing to serve the Confederacy. Our first one of his we saw had Maffitt and Professor Baches names on them the collector remembers. I look at some of these studies that they did of Bald Head and other places and how they managed to do that (make such accurate surveys) I really dont know.

The collection is a remarkable record of North Carolinas past dating from the days when Englishmen first set foot on the American mainland to the years when North Carolina joined its sister colonies in claiming their independence to the anguish-filled years of the Civil War when brother faced brother and the nation bled itself to exhaustion.

North Carolinas past is displayed with pride in the maps of one admittedly amateur collector. Amateur or not the collector treats his maps and charts with all of the love and care they deserve as the irreplaceable works of art and historical gems they are.