The Wrath of Florence 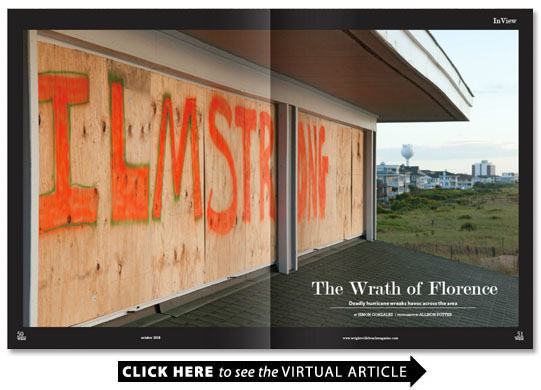 Hurricane Florence made landfall at Wrightsville Beach at 7:15 a.m. on September 14. While not the monstrous Category 4 or 5 once feared Florence was still a devastating storm with maximum sustained winds of 91 mph.

The fierce winds knocked down trees and power lines. More than 100 000 households in New Hanover County were without electricity. The storm dumped as much as two feet of rain. Flooding and downed trees blocked dozens of roads leaving the county cut off from the rest of the state a virtual island.

Residents who stayed had to deal with food and fuel shortages while those who evacuated had no way home for many days.

Because the eye passed directly over Wrightsville Beach it was spared major damage but residents under a mandatory evacuation waited four days to return to while crews restored the water and sewer system and most of the island regained electricity.

The recovery process will be long but the Cape Fear region has weathered many storms and will get through this one. Brighter days are ahead.