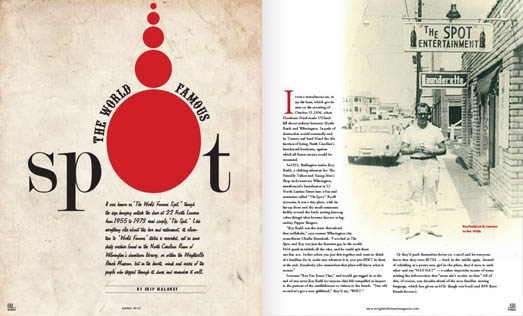 It was known asThe World Famous Spot though the sign hanging outside the door at 22 North Lumina from 1955 to 1973 read simply The Spot. Like everything else about this bar and restaurant its elevation to World Famous status is recorded not in some dusty archive found in the North Carolina Room of Wilmingtons downtown library or within the Wrightsville Beach Museum but in the hearts minds and voices of the people who stepped through its doors and remember it well.

It was a tumultuous era to say the least which got its start on the morning of October 15 1954 when Hurricane Hazel made US landfall about midway between Myrtle Beach and Wilmington. Its path of destruction would eventually end in Toronto and lend Hazel the distinction of being North Carolinas benchmark hurricane against which all future storms would be measured.

In 1955 Burlington native Roy Rudd a clothing salesman for The Friendly Tailors and Young Mens Shop in downtown Wilmington transformed a laundromat at 22 North Lumina Street into a bar and restaurant called “The Spot.” By all accounts it was a tiny place with its bar up front and the small restaurant facility toward the back serving (among other things) what became known as legendary Pepper Burgers.

“Roy Rudd was the straw that stirred that milkshake ” says current Wilmington city councilman Charlie Rivenbark. “I worked at The Spot and Roy was just the funniest guy in the world. Hed speak in initials all the time and he could spit them out fast too. In fact when you put this together and want to think of a headline for it make sure whatever it is you put BYKT in there at the end. Everybody who remembers that place will know what it means.”

It means “But You Knew That ” and would get tagged in at the end of any news Roy Rudd (or anyone else) felt compelled to impart to the patrons of the establishment or visitors to the beach. “I see old so-and-sos got a new girlfriend ” theyd say “BYKT.”

Or theyd park themselves down on a stool and let everyone know that they were BITSA back in the saddle again. Instead of whistling at a pretty new girl in the place theyd turn to each other and say “NAY NAT” a rather imprecise means of transmitting the information that “none aint as nice as that.” All of this of course was decades ahead of the now familiar texting language which has given us LOL (laugh out loud) and BFF (best friends forever).

And everybody had a nickname. Charlie Rivenbark was “Runt.” William Bryant was “Bingo.” The Spots co-owner Elverton Anderson (E.A) Shands was “Curly.” The Wrightsville Beach chief of police was “Stinky” Williamson and his brother who was the chief of police in Wilmington was “Fatty” Williamson. (Their brother Rhomey was a state policeman.) Current Mayor of Wilmington Bill Saffos father with a Greek first name of Advgerinos became known as “Dokie.”

One of the more famous stories told in different ways by at least three people who remembered the tale distinctly centered on Dokie Saffos purchase of a used Cadillac shortly after mustering out of the service in 1953. More than anything Dokie wanted to show off his new purchase to Roy Rudd and drove to The Spot to do just that. All excited Dokie parked directly in front of the place and with a King Edward cigar poking out of the side of his mouth went inside to fetch Rudd. Rudd stepped out with a much more expensive cigar sticking out of his mouth took a quick look and said “You know Dokie there are three things that dont impress me a fat Greek smoking a cheap cigar driving a used Cadillac.”

“Anybody whos heard that story probably heard it from me ” says Harold “Booty” Horn who met Rudd when they were both in the service Horn in the Navy Rudd in the Army. “He had quite a wit about him and just had this personality that was infectious. When The Spot opened up originally me and my wife Eloise used to roll the babies down there in the strollers. It wasnt like one of those places where theyd be throwing beer bottles at you overhand.”

Rudd played host to local luminaries like Sonny Jurgensen a graduate of New Hanover High School who went on to quarterback the Philadelphia Eagles from 1957 to 1963 and the Washington Redskins from 1964 to 1974. Roman Gabriel another New Hanover High School graduate who quarterbacked the Los Angeles Rams (1962 to 1972) and the Eagles (1973 to 1977) was also a frequent patron.

Rudds love of athletics led him to sponsor a city basketball team in Wilmington called appropriately enough The Spot with A.L. “Alley” Hart at its center. The relationship between these two led to “The Internationally Famous Whale Boat Races” (WBM March 2010) which ran for three years from 1967 to 1969; all because Rudd approached Hart one day and said “Alley we have to do something to liven this beach up.”

Rudds desire to “liven this beach up” extended beyond the beach and the walls of his establishment and was exemplified by a little game they cooked up at The Spot called “The Wizard.”

A group from The Spot would be away from the bar at a private party somewhere and would tell a newcomer to the area that they knew of this guy called The Wizard who could identify a randomly drawn card from a standard deck of 52 over the phone. To prove it theyd let the stranger draw a card from a deck and then theyd call The Spot.

“Is the card in front of you?” he might ask. “Is it face up? Im seeing a dark card either a club or spade is that right?” Hed continue to play this game until to the surprise of the stranger (and perhaps the loss of a few bucks hed placed as a bet) the card would be identified correctly by The Wizard. According to “Big Dave” Ward a Wrightsville Beach lifeguard from that era The Spot crowd “blew everybodys mind with that trick for about five years.”

No one knows for sure exactly when the phrase “world famous” was attached to The Spot but it was related to phone calls Rudd would receive from what he called “his boys” from all over the world. When people from the beach would either move away or travel or join the Army and go to Vietnam or get stationed in Fairbanks Alaska Rudd had an arrangement with them to call and let him know how they were doing. Calls from Vietnam as an example could get expensive so in those days of operator-assisted phone calls Rudd told them to call collect person-to-person and ask for Doctor Rudd.

“I have a person-to-person collect call for a Doctor Rudd ” the operator would say identifying the caller by name.

“Im sorry ” Rudd would say “Doctor Rudd is in surgery right now. If theres a message Id be glad to pass it along.”

The caller might get in a few words before the operator terminated the call but in that minute or two Rudd would have heard from a beach acquaintance that he had arrived safely or was doing well in his new location or was just calling to say hello. These calls would come in almost daily from around the world which is how its reputation as The World Famous Spot was established.

Rudd did get himself into the Wrightsville Beach history books once in 1971 when he ran for re-election as a Wrightsville Beach Alderman. He had served a single four-year term already and prior to that had been appointed to fill the unexpired term of Alderman Lawrence Rose who had resigned.

In June 1971 elections were held with three men competing for two seats: incumbents Rudd and Bob Sawyer and Dr. Howard Armistead. When the votes were tallied Sawyer and Armistead had tallied 231 votes while Rudd had received only 230. Rudd asked for a recount and on the evening of June 5 the ballots were carefully recounted. Armistead as it turned out had actually received 232 votes while Rudd and Sawyer were deadlocked at 231 (these 694 votes by the way represented 69 percent of the eligible electorate on the beach at the time). Town clerk W.D. Gnau notified Rudd and Sawyer that the only provision in North Carolina statutes for breaking a tie in elections was the drawing of lots. Straws were prepared. Rudd drew the winning straw earning a second term as Alderman.

By the time Rudd sold The Spot in 1973 Wrightsville Beach was already in the midst of a transformation that would see its population quadruple to nearly 2 700 residents in 2009. In those days especially in the late 1950s and early 1960s virtually all of the communitys residents about 600 year-round knew each other which made the closely-knit phenomenon of The World Famous Spot possible. The police were as likely to drive you home as arrest you and in general had far less serious crimes and misdemeanors to contend with.

Rudd died at the age of 54 about three years after he left The Spot which began a series of restaurant transformations leading to its present incarnation named after the address 22 North Lumina. The Spot wasnt the only tavern operating on the beach during that 18-year span between 1955 and 1973 but thanks to Rudd its remembered in fonder and more precise detail than some of its contemporaries like The Wits End or The Upper Deck.

They remember the place. They remember the man with his dark frame glasses which he was constantly pushing back up onto his nose when theyd slip. They remember the community the family and the friends who coalesced around this distinctive personality and a time of innocence manifested in the day-to-day fun of The World Famous Spot.

“This guy ” said Rivenbark “of all the people I was exposed to coming along I probably miss him more than anybody. But you know it was one of those things where you kind of had to be there.”