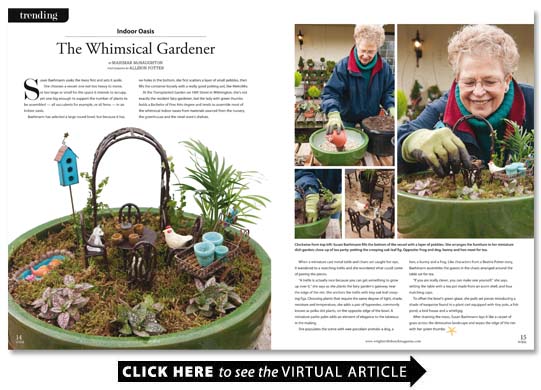 Susan Baehmann soaks the moss first and sets it aside.

She chooses a vessel: one not too heavy to move or too large or small for the space it intends to occupy yet one big enough to support the number of plants to be assembled — all succulents for example or all ferns — in an indoor oasis.

Baehmann has selected a large round bowl; but because it has no holes in the bottom she first scatters a layer of small pebbles then fills the container loosely with a really good potting soil like MetroMix.

At the Transplanted Garden on 16th Street in Wilmington she s not exactly the resident fairy gardener but the lady with green thumbs holds a Bachelor of Fine Arts degree and tends to assemble most of the whimsical indoor oases from materials sourced from the nursery the greenhouse and the retail store s shelves.

When a miniature cast metal table and chairs set caught her eye it wandered to a matching trellis and she wondered what could come of pairing the pieces.

A trellis is actually nice because you can get something to grow up over it she says as she plants the fairy garden s gateway near the edge of the rim. She anchors the trellis with tiny oak leaf creeping figs. Choosing plants that require the same degree of light shade moisture and temperature she adds a pair of hypoestes commonly known as polka dot plants on the opposite edge of the bowl. A miniature parlor palm adds an element of elegance to the tableaux in the making.

She populates the scene with wee porcelain animals: a dog a hen a bunny and a frog. Like characters from a Beatrix Potter story Baehmann assembles the guests in the chairs arranged around the table set for tea.

If you are really clever you can make one yourself she says setting the table with a tea pot made from an acorn shell and four matching cups.

To offset the bowl s green glaze she pulls set pieces introducing a shade of turquoise found in a plant cart equipped with tiny pots a fish pond a bird house and a whirligig.

After draining the moss Susan Baehmann lays it like a carpet of grass across the diminutive landscape and wipes the edge of the rim with her green thumbs.