The View from on High 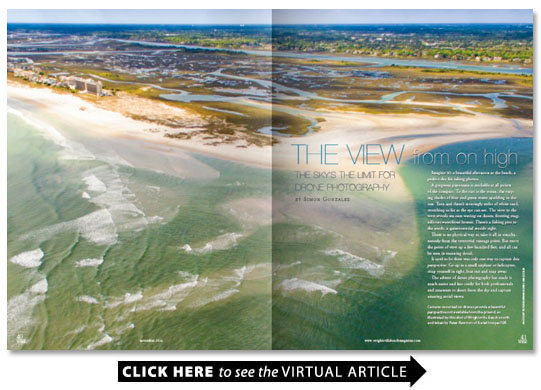 Imagine it’s a beautiful afternoon at the beach a perfect day for taking photos.

A gorgeous panorama is available at all points of the compass. To the east is the ocean the varying shades of blue and green water sparkling in the sun. Turn and there’s seemingly miles of white sand stretching as far as the eye can see. The view to the west reveals sea oats waving on dunes fronting magnificent waterfront homes. There’s a fishing pier to the north a quintessential seaside sight.

There is no physical way to take it all in simultaneously from the terrestrial vantage point. But move the point of view up a few hundred feet and all can be seen in stunning detail.

It used to be there was only one way to capture this perspective: Go up in a small airplane or helicopter strap yourself in tight lean out and snap away.

The advent of drone photography has made it much easier and less costly for both professionals and amateurs to shoot from the sky and capture amazing aerial views.

“The cool thing is being able to shoot that vantage point that you don’t see every day and the ability to be able to shoot where the average person can’t ” says drone photographer Paul Ward. “Aerial photography adds a new exciting dimension.”

“Drone” is a generic term for any unmanned aircraft from the large heavily armed fixed-wing airplanes used by the military down to toys for children. The ones used by photographers and videographers are typically 10-pound quadcopters that are lifted and propelled by four rotors. The camera is attached underneath the copter and operated by remote control.

It can be an inexpensive hobby. Amateurs can get a drone with an 8MP camera that can shoot high-definition video starting around $100. Rigs aimed at commercial photographers start at more than $500 and go over $1 000 for the top-rated drone with a 12MP camera that shoots 4K HD video.

“Commercial drone photographer” is a relatively new business not so much for the cost but because of the regulations. Up until a couple of months ago the Federal Aviation Administration required anyone flying an unmanned aerial vehicle for professional reasons to have a manned aircraft pilot’s license. That was just the first of a myriad of complex rules that were a challenge to navigate.

“There’s been a lot of misunderstanding by the general public and a bit of a learning curve for people who aren’t already in the aviation business in how to work with the FAA ” says Steve Murray CEO of Wilmington-based Skylevin an aerobotic imaging company. “It hasn’t been easy for folks to become self-educated. Some of the acronyms can be challenging for folks who aren’t aviators to begin with.”

Murray created his company in July 2015 and began operating commercially in January. It helped that he and his two employees Steve Dixon and Paul Jones are pilots with over 10 000 hours of flight time each.

“The three of us have an extensive background in manned aviation ” he says. “Some of these things aren’t foreign to us.”

Ward pilots a drone for Fly4Pix an FAA-approved aerial photography company in Wilmington. It’s a new venture of Digitus89 a web design and digital marketing firm that’s been around since 1989.

“We added it to our other services ” says company president and founder Ray Rogers. “I decided to break it away because I do think it’s the wave of the future. It’s a sign of the popularity of drones and where imaging is going with the aerials.”

Peter Newman owner of Aerial Images ILM had flown radio-controlled planes for years and was “kind of a hobby photographer.” He combined the two interests and began dabbling in drone photography five years ago. He launched his company in 2014.

“The one thing I’ve always been into is story-telling ” he says. “I love the way I can tell a story with the video and the images.”

His clients include real estate companies and builders. He also shoots ocean sports like the Carolina Cup the annual standup paddleboard competition at Wrightsville Beach.

“One of the other cool things about an event like that is with action sports photography if you are on the beach with a long lens it’s such a game of timing to get the perfect shot at that instant ” Newman says. “With the drone even if I’m only going for still images typically I’ll shoot 4K video the whole time. I can stop the video and shoot stills but with 4K video it’s really easy to shuttle through it and grab the frame that’s the perfect picture.”

Although advances in technology and reasonable costs make aerial photography a viable industry not many companies were able to break into the business because of the regulations. That all changed when the FAA issued new guidelines on August 29.

A pilot’s license is no longer required. Instead commercial drone operators have to pass a test to become certified.

That’s good news for people like Jeff Wenzel a heretofore amateur. The new regulations allowed him to start his own business Above Topsail.

“It’s a game-changer for people who have been sitting on the sidelines ” he says. “There’s still a barrier in that you have to pass an FAA-certification exam but it also removes an unrealistic barrier of needing a pilot’s license to fly a drone up and take a picture.”

Wenzel has flown radio-controlled airplanes as a hobby for about 20 years. When small mobile digital cameras began to become popular and affordable he thought about using one to get the aircraft-eye view.

“I’ve always wanted to mount a GoPro to one of my airplanes to get that perspective ” he says.

Instead he found a good deal on a drone at a Black Friday sale. That became his aerial photography vehicle.

“The flying part is easy for me ” he says. “After watching a few videos and playing with it for about half an hour I figured it out. I had to learn the photography and videography from scratch.”

He began shooting from Topsail to Wilmington with a small ambition.

“The Topsail Online Gazette on Facebook posts a sunrise and sunset photo each day ” he says. “My goal was to get a photo published.”

Wenzel accomplished that aim and gained a following on his own social media sites. People approached him about doing projects. But he was limited because he didn’t qualify for a commercial license. Now he can get his company off the ground.

The new requirements are much simpler. Anyone over age 16 can take an aeronautical knowledge test at an FAA-approved facility and pass a background check to qualify for a remote pilot certificate.

Those who pass the test will find that many regulations still exist. Drones are limited to a maximum height of 400 feet. They can’t fly over people. They can’t fly at night. They have to operate within the pilot’s line of sight. Any drone weighing over half a pound must be registered with the FAA even if it’s flown by a hobbyist.

Still the more lenient licensing requirements are expected to create explosive growth in the industry. There were fewer than 19 000 drones registered for commercial purposes when the new regulations took effect. The FAA predicts there could be as many as 600 000 within the next year.

Some companies have big plans for the technology. Amazon intends to use drones to transport packages. The retail behemoth says it will be able to deliver parcels weighing up to five pounds in 30 minutes or less. But there are many logistical and regulatory hurdles to clear before that vision becomes a reality.

First-responders are exploring ways drones can augment their mission. The Wrightsville Beach Fire Department is using an unmanned aerial vehicle (UAV) as part of an academic study to determine the effectiveness of having an eye-in-the-sky in a variety of rescue and emergency situations. A UAV equipped with a thermographic camera with infrared technology for example could find a swimmer in distress and guide rescue crews.

Wrightsville Beach firefighter Sam Proffitt examined the usefulness of UAVs for first-responders as part of the public health graduate degree he recently earned from Pennsylvania State University. The university awarded two drones to local departments to continue the study — one for Wrightsville Beach and one for the Carolina Beach Fire Department.

Proffitt says the study will help other departments across the country start their own programs.

“We’re working to create a step-by-step process that other departments can use to determine how to implement a UAV ” Proffitt says.

Drones equipped with cameras can be used in a multitude of commercial applications.

Zulu Marine Services a company with locations in Wilmington and Savannah got into the drone business when it launched Zulu AIR (Aerial Imaging Resources) out of its Georgia office.

Inspections include such structures as bridges power lines and cell and water towers. The camera records high-definition video that can be reviewed by safety inspectors and save the cost of in-person visits and equipment.

Newman says drones equipped with special cameras can do precision topographical mapping and fly over farmland to gauge the soil hydration.

“The industrial applications are huge ” he says.

Murray sees many other future uses from flying over areas not easily accessible by foot to using drones for sport.

“It can be used for agriculture inspections with special cameras to evaluate the health of crops ” he says. “Drone racing is on the rise. People fly them through courses and wear point-of-view goggles. It feels to them that they are flying the aircraft.”

While the sky might be the limit for future applications the most common use for now is photography and videography.

Drone photography is being used extensively in the real estate industry.

“Realtors have had the mantra for years: location location location ” Murray says. “Drones allow them to show the proportion in relation to the area. It was available as manned photography but it was so expensive. Now it’s available every day at minimal cost. I can certainly see that drones are going to have a long-term use in real estate advertising and advertising in general. It will become slightly less novel as it’s used and seen everywhere but the value-added will always remain.”

Aerial views help the potential customer to put the house in context to its surroundings.

“Someone from out of the town can see proximity to the water to restaurants and golf courses stores etc. ” Rogers says.

Satellite images are readily available through services such as Google Earth but they are often dated and can lack details at extreme zoom.

“Google maps can be outdated ” Rogers says. “This isn’t.”

Aerial photography provided a way for one of Rogers’ clients — a developer in Texas building an apartment complex in Wilmington — to keep a virtual eye on a project.

“We flew over the apartments once a month to show him the progress so he didn’t have to come here ” Rogers says. “A lot of people contact us for things like that. We’ve flown over some construction sites during the planning phases to look and see how everything is laid out.”

While drones are allowed to fly up to 400 feet Newman says height is not necessarily a prerequisite to getting the best shot.

Some of Newman’s work with film and television production companies is even closer to the ground.

“A lot of the work I do is ground level ” he says. “Instead of using a dolly track or a boom or jig I’ll just fly the drone at ground level and have the actors walking toward me. It’s less equipment and it really saves a lot of time.”

Whatever the applications it seems certain that there will be more and more drones flying around very soon.

“It’s a fun business to be in ” Newman says. “It’s mind-boggling to think what’s it going to look like in five years and 10 years.”