The Swirl and Swing of Letters 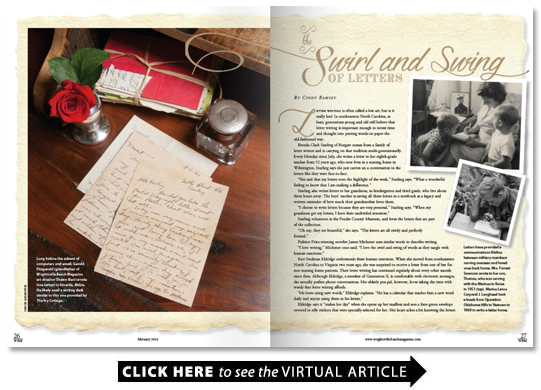 Letter writing is often called a lost art but is it really lost? In southeastern North Carolina at least generations young and old still believe that letter writing is important enough to invest time and thought into putting words on paper the old-fashioned way.

Brenda Clark Starling of Burgaw comes from a family of letter writers and is carrying on that tradition multi-generationally. Every Monday since July she writes a letter to her eighth-grade teacher from 52 years ago who now lives in a nursing home in Wilmington. Starling says she just carries on a conversation in the letters like they were face-to-face.

“She said that my letters were the highlight of the week ” Starling says. “What a wonderful feeling to know that I am making a difference.”

Starling also writes letters to her grandsons in kindergarten and third grade who live about three hours away. The boys’ mother is saving all those letters in a notebook as a legacy and written reminder of how much their grandmother loves them.

“I choose to write letters because they are very personal ” Starling says. “When my grandsons get my letters I have their undivided attention.”

Starling volunteers at the Pender County Museum and loves the letters that are part of the collection.

“Oh my they are beautiful ” she says. “The letters are all swirly and perfectly formed.”

“I love writing ” Michener once said. “I love the swirl and swing of words as they tangle with human emotions.”

Keri Stedman Eldridge understands these human emotions. When she moved from southeastern North Carolina to Virginia two years ago she was surprised to receive a letter from one of her former nursing home patients. Their letter writing has continued regularly about every other month since then. Although Eldridge a member of Generation X is comfortable with electronic messages she actually prefers phone conversations. Her elderly pen pal however loves taking the time with words that letter writing affords.

“He loves using new words ” Eldridge explains. “He has a calendar that teaches him a new word daily and enjoys using them in his letters.”

Eldridge says it “makes her day” when she opens up her mailbox and sees a lime green envelope covered in silly stickers that were specially selected for her. Her heart aches a bit knowing the letters may soon cease. Arthritis is slowly stealing her pen pal’s ability to write. But he has a plan — he’s learning how to use the tape recorder so he can send “voice letters.”

Baby Boomer Millard Murray says he brushed up on his letter-writing skills last year when his grandson Collin joined the Army and left home for basic training. Murray says the new recruits only had phone privileges once every other week for a few minutes so letters were their best means of communication.

“I’ve been through many family issues through the years ” Murray says “but no direct contact with my main man was one of the hardest.”

Some weeks he wrote every other day just to feel closer to his grandson.

Letters are often and understandably linked to times of war especially back when letters took weeks or even months to reach soldiers on the battlefront whether land or sea. Letters sent home were treasured as proof a loved one was still alive even though so much could change between the writing and receiving.

The archives of the Battleship North Carolina contain a large collection of letters from World War II including approximately 600 letters donated by former crewmember Paul Wieser who served on the ship before during and after the war.

When Wieser left for boot camp in the spring of 1941 his girlfriend Jean Coddington was still in high school. During Wieser’s years on the ship their relationship grew through the letters they exchanged and when the ship returned to the states for repairs in 1943 Paul and Jean were married. She saved every letter he sent home.

Even though none of the letters Jean wrote to Paul are part of the collection their lives and love story clearly unfold in his letters as he takes care to mention her words and answer each thought she sends.

This thoroughness by which letters were written in the past gave historians the information they needed to chronicle the lives of people during early eras — right down to what people ate what they wore the adversities they faced their thoughts and hopes and dreams.

In a 2009 Newsweek story titled “The History and Lost Art of Letter Writing ” journalist Malcolm Jones shares his concern that the shift from letter writing to an overwhelming amount of digitally generated data will not provide the information historians need to accurately chronicle current and future generations.

“The decline in letter writing constitutes a cultural shift so vast that in the future historians may divide time not between B.C. and A.D. but between the eras when people wrote letters and when they did not ” Jones writes. “Historians depend on the written record ? [and] are at the mercy of that record.”

While the “swirl and swing” Michener mentions may conjure up images of great penmanship often seen in letters of old Michener’s books are read in type. Does that diminish the movement of emotion in the words?

Author Rebecca Petruck a member of Generation X says not. One of her strongest friendships developed and strengthened via electronic communication.

“There’s nostalgia for letter writing that makes sense when you think of eras where letters were all people had to connect them ” Petruck says. “But I like how technology has created more opportunities for closeness to develop.”

Even veterans of old-timey letter writing have developed a fondness for the new styles of communication. Those WWII crewmembers that served aboard the USS North Carolina and knew the agony of waiting for mail call have embraced technology. For years they have maintained contact with each other between annual reunions through an email chat line.

Not only does that chat line — and now their own association Facebook group — provide instantaneous connection technology allows them to correspond as a group so everyone hears the news simultaneously. That connection becomes more important as time passes and most of the messages report the ill health or death of a fellow shipmate. No swirl of letters is needed for that emotion.

Yet a new generation of writers is emerging and keeping the swirl and swing of handwritten communication alive.

Eight-year-old Kamryn and 6-year-old Lainey write personal thank-you notes with the added touch of pictures. Their mom says they enjoy writing the special notes and she encourages it as a way to keep them off electronics for as long as possible.

Many kids still write and mail letters to Santa. Seven-year-old Tyler wrote a letter to the tooth fairy. His mom says writing the letter was Tyler’s idea but she encourages him to continue writing letters because it helps with his spelling handwriting and grammar.

Thirteen-year-old Victoria uses letters as a means of special communication with her mom. Even though they are very close and have no trouble with verbal communication Victoria believes in the power of the written word.

“There was one day I remember that my mom wasn’t feeling well and it seemed like everything was going wrong ” Victoria explains. “So I wrote her a few small heart-shaped letters and taped them to the door and cabinet. When she got home and saw them her face lit up.”

Even as a member of the youngest generation Victoria has an old soul. Her mother has a box full of these letters of love and encouragement that Victoria has written through the years.

“I am so glad that I wrote my mom letters ” Victoria explains “because unlike texts or emails I know that they will be cherished forever.”