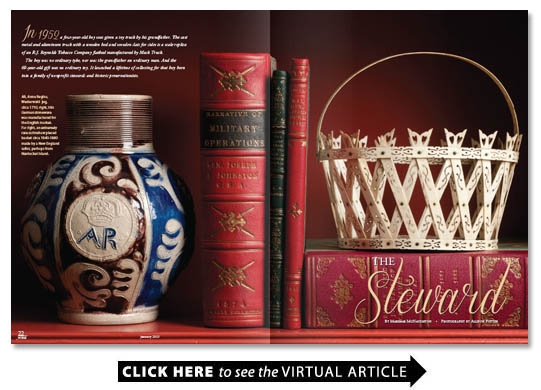 In 1952 a four-year-old boy was given a toy truck by his grandfather. The cast metal and aluminum truck with a wooden bed and wooden slats for sides is a scale replica of an R.J. Reynolds Tobacco Company flatbed manufactured by Mack Truck.

The boy was no ordinary tyke nor was the grandfather an ordinary man. And the 60-year-old gift was no ordinary toy. It launched a lifetime of collecting for that boy born into a family of nonprofit stewards and historic preservationists.

After decades of researching the collection he started in his youth and showcased and shared in his Old Salem residence he sold in 2009 in March 2010 he parted with almost all of his worldly possessions at auction.

Some 560 lots of R.J. Reynolds memorabilia childrens toys the original truck was then valued between $500 to $1 000 Early American furniture and paintings British and Continental ceramics hooked and shirred rugs pewter brass glass and woven baskets brought a total of $1.9 million.

The auction drew the countrys leading Early American decorative arts museums to Salem College where it was held. Representatives from Winterthur Museum in Delaware Colonial Williamsburg in Virginia and Tryon Palace in North Carolina hoped for a chance to bid on fine Southern Piedmont and New England pieces. The 176-page full-color auction catalog presents an impressive picture of the collector and his passion.

Perhaps more interesting is the personal collection that was reserved for the seacoast retreat that is now a permanent repository for museum-quality maritime art Civil War naval maps Revolutionary War letters from the North Carolina signers of
the Declaration of Independence first edition North Carolina history books plus scrimshaw earthenware pottery and more decorative accessories that resonate with meaning for the lifetime steward.

All have found a new address in one of Wrightsvilles bedroom communities overlooking the skyline of the tiny beach town from a top berth above the Intracoastal Waterway. On a clear day its possible to see the southern tip of Masonboro Island from the window hanging above the kitchen sink.

The three-bedroom condominium floorplan is simple. The kitchen gives way to a small dining area that adjoins the living room. Both areas open to a terrace anchored at its southern edge by a Carrara marble urn purchased from the Palm Beach estate of Bernie Madoff. Italian tiles cover the terrace floor. Cushioned outdoor wicker settees and chairs surround conversation tables and a few well placed conversation pieces like the 1850 confit pot and an 18th century walnut oil vessel.

Sliding glass doors separate the terrace from the living room appointed with built-in display cases. One is a showcase for English Delft. The tin glaze pottery is rarer than its Dutch namesake. This particular assemblage includes 1690 King William and Mary Regina chargers. The large 14-inch decorative plates bear the portraits of the king and queen of England who reigned from 1689 until 1702.

The regents portrait chargers are flanked by German Westerwald jugs scrimshaw clock hutches and a 1720 English Delft bowl from Bristol a locale like London well known for its Delft earthenware.

Making way for the display of more antiquities a chase located along the living rooms interior wall allowed the addition of French doors leading into the entrance hall. This underutilized space allows the housing for the collection of scrimshaw made from whale teeth and bones.

Out at sea when whalers were bored they whittled and engraved keepsakes called scrimshaw for their wives and children. This display includes a childs teething ring and ball clothespins corkscrews a comb a toy spinning wheel a yarn caddy rolling pin pie dough crimper and a device that strapped on a sailors belt holds needles for sail mending.

Among the prized pieces is a whale tooth carved with a scene depicting the battle between the USS Constitution and a French naval ship in Boston harbor.

In the same case there is an 1860 scrimshaw dollhouse bed a ladle with a baleen handle and sailing ships carved into coconut shells. Tiny Swedish crystal glasses filled with water are placed around the edges of the case to control the humidity in the case for preservation.

So far almost everything is touchable at once functional and decorative. One standing cupboard is filled with club-shaped bottles. The bottles date from 1687 up to 1800. There is a rolled paper tea caddy an 1890 pig weathervane early lanterns and a coveted collection of Westerwald ceremonial tankards made in Germany for export to England dating to the early 1700s and one recently purchased George II from 1687.

All of the collectibles rotate throughout the space including the Westerwald which is sometimes housed in a uniquely notched 18th century New England cupboard that was designed for placement beneath a ceiling beam in its original setting. Beside it is a 1690 Boston Centennial piece possibly made in 1890. Made from birds eye maple it is believed to have been fabricated exactly the way it would have been built in 1690.

Floating in the center of a room rendered in deep yellow with flashes of red decorated by Raleigh interior designer Edythe Medlin is a drop leaf table surrounded by New England chairs. And despite an open kitchen counter covered with a stunning slab of marble extracted from an ancient Brazilian seabed most of the meals are taken on laps in front of the television.

The corridors are lined with maps etchings and paintings under glass. One map is only one of two in known existence. The other is kept in the New Hanover County Librarys North Carolina Room. Its a hand-drawn and painted chart illustrating the battle plan for the first attack on Fort Fisher in December 1864 with line drawings to show the Union warships and their projected lines of fire on the massive earthen fortification that guarded Wilmington.

In the vestibule to the master suite there is an original engraving of a portrait of Lord Spencer Compton Earl of Wilmington and an 1882 hand-tinted drawing of William Hoopers Wilmington town house.

The inner sanctum part bedchamber part sitting room and study is the repository for a selection of rare North Carolina titles. The collector is squiring a research library that will be turned over to the rare book room of Old Salem and the Museum of Early Southern Decorative Arts.

Among the papers are multiple letters from William Hooper John Penn Joseph Hewes all represented the State of North Carolina as signers of the Declaration of Independence; plus all of North Carolinas Constitutional signers; all of the Revolutionary War generals and a sizeable collection of New Hanover County historical documents.

Bound volumes contain original documents of Carolinas Lord Proprietors dating from 1663 all of North Carolinas governors including the royal governors and governors from South Carolina and from Tennessee the territory of which North Carolina ceded to the federal government in 1790.

Some of the earliest books printed in North Carolina include four from William Hoopers library with his signature; a first edition of Benson John Lossings 1850 Pictorial Field Book of the Revolution; John Lawsons 1709 A New Voyage to Carolina a first edition account of North Carolina American history and Southern travel; and rare broadsides from South Carolina Kentucky and Tennessee.

The research library is scheduled to open in May 2013 and the North Carolina Civil
War collection will be named for fellow historian Dr. Chris E. Fonvielle Jr. an associate professor in the Department of History at the University of North Carolina Wilmington.

The rare book collection will never be complete nor will this lineage of stewardship
likely ever end.