The Sea, the Sky and the Lines of Life 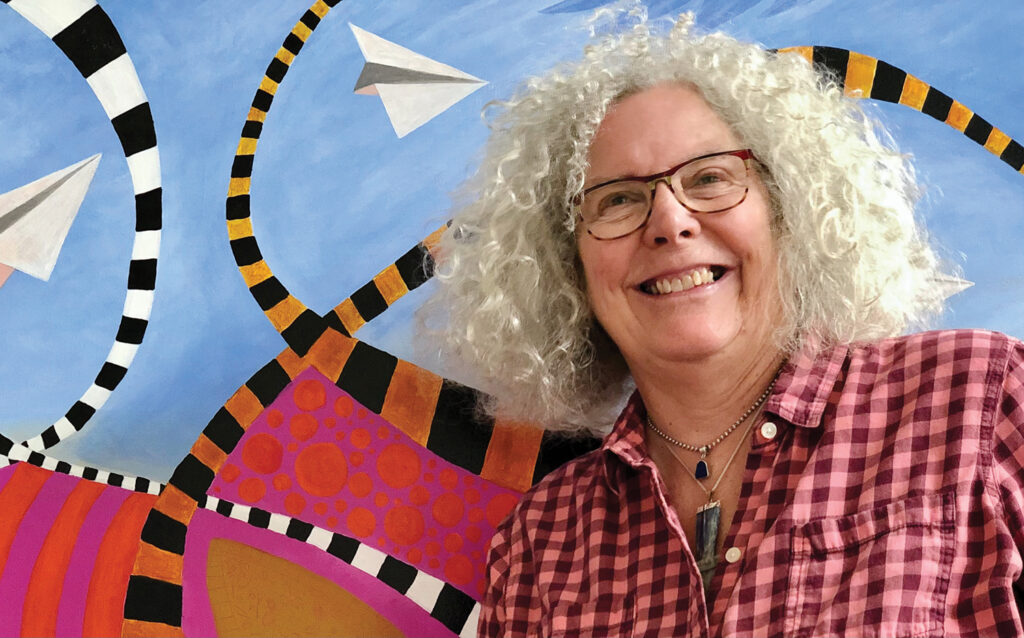 Lisa Creed’s artwork can be found displayed at the Ritz Carlton Pavilion in Washington, D.C., or at Duke University’s Office of the Provost and Hart House — otherwise known as the president’s residence — and in the backdrop of television shows One Tree Hill and Under the Dome.

Her art has received national awards, been exhibited in galleries up and down the East Coast, and is currently on view at Horse & Buggy Press in Durham and at New Elements Gallery on Front Street in downtown Wilmington.

Creed holds a bachelor’s degree in art and a master’s in graphic design, but she credits Saturday morning classes as a child growing up in Providence, Rhode Island, as being the most impactful and influential training of her career.

“Every Saturday morning, I would get up and walk down, I don’t know how many blocks, but a lot of blocks to Gino Conti’s studio,” says Creed.

Conti was a Works Progress Administration artist who died in 1982. Six of his murals painted in the 1930s and 1940s were recently rediscovered at the University of Rhode Island during a renovation.

In the 1960s, Conti offered the three-hour Saturday morning children’s art classes at his studio for $50 a year.

“It was a magical place. You could do anything from paint with oils, make mosaics, make eyes of God, work with clay, paint tiles, do woodcut prints … his whole thing was, you come, you make work,” Creed says. “And that’s what I did and that’s really my inspiration. It’s led to how I work in general; I make work.”

In high school, Creed would sneak into the art room on the weekends with a friend to make art. She learned sculpture in college, and later delved into letter press and writing poetry. Over time, Creed returned to her childhood roots and developed her own style of abstract painting, which she describes as busy yet quiet, minimal yet complex, the same but different.

During the shutdowns in 2020, while taking long walks with her dogs through neighborhoods, Creed photographed scenes to paint. Sprawling phone lines caught her eye and made their way into her art.

One of her favorite works is entitled Have Fun. It uses lines and a ladder to express, through abstraction, her mother’s best advice.

Creed’s dad taught at Brown University during the years in Providence. Her mother championed creativity, often handing Creed a pack of crayons and a blank piece of paper.

“Never a coloring book, always a blank piece of paper. It taught me to focus and create,” says Creed.

Have Fun as well as Windy Fishing Village and Reckoning from Creed’s 2021 portfolio are at Durham’s Horse & Buggy Press and Wilmington’s New Elements Gallery.

“I love those pieces. We were excited to get those. The composition is really strong and incredibly whimsical. They are beautiful,” says New Elements Gallery owner Miriam Oehrlein.

Creed’s “Sea and Sky” series is minimal and monochromatic, reflecting a love of the coast before development, when it was one giant playground.

“Coastal Maine where I grew up was still remote and not heavily populated. It has since been discovered. I see giant houses now built in fields where I used to play, so my sea and sky series has three rules: no boats, no houses, no people,” laughs Creed. “It’s only because I want people to experience the world I experienced as a kid, which was wild, open and free.”

Sea and sky works such as Autumn Light and Contemplation are at New Elements.

Creed teaches a class at the Durham Arts Council much like the one Conti taught her called Painting Gone Wild.

“So many of us lose our creativity in school because we’re told you have to draw it or paint it a certain way. My whole purpose is to free people back up so they can just make work and as my mother would say, ‘Have fun.’ I have people who just keep taking the class over and over again because they’re having fun creating their own art” says Creed.

Creed says she plans to continue teaching and “making work” for as long as she can.