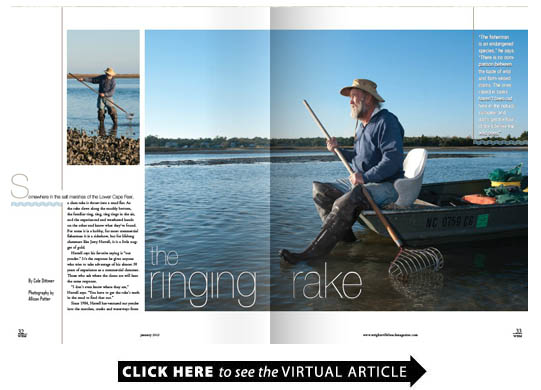 Somewhere in the salt marshes of the Lower Cape Fear a clam rake is thrust into a mud flat. As the rake claws along the muddy bottom the familiar ting ting ting rings in the air and the experienced and weathered hands on the other end know what theyve found. For some it is a hobby for most commercial fishermen it is a sideshow but for lifelong clammers like Jerry Harrell it is a little nugget of gold.

Harrell says his favorite saying is out yonder. Its the response he gives anyone who tries to take advantage of his almost 30 years of experience as a commercial clammer. Those who ask where the clams are will hear the same response.

I dont even know where they are Harrell says. You have to get the rakes teeth in the mud to find that out.

Since 1984 Harrell has ventured out yonder into the marshes creeks and waterways from Carolina Beach to Topsail Beach to make a living digging up littlenecks middle necks top necks cherrystones and chowder clams. In an age of extreme competition in the commercial fishing industry he is one of a few local fishermen who solely relies on the clam. He compares himself to the prospectors of the Gold Rush.

It is like the Gold Rush because when Im out here and I find just one clam I get a rush he says. Sometimes when I pull the rake up I dont know what the heck Im going to get.

Although Harrells comparison draws the image of glittering hidden treasures lying in wait under the mud he is the first to admit that he didnt get into the business for the riches. Before he was a clammer Harrell was a contractor and says he wired most of the television stations antennas in the area. After experiencing severe burnout with his job he revisited the skill he had learned as a boy growing up around the fishermen in his family.

You wont get rich doing it Harrell says. When you see a raggedy [expletive] old truck and trailer at the boat dock you can tell that is a clammer or an oysterman.

Crossing the Intracoastal Waterway and deftly guiding his 12-foot johnboat through the creeks and around the sandbars an hour after low tide Harrell idles up to one of the many spots he keeps in his rotation hoping to find a honey hole. Since one area can take around six months to replenish its stock of clams his rotation is planned around that time frame.

Clammers have their own techniques. For his Harrell says he has been called the laziest clammer in the world. Situating a cutoff bucket seat on the bow of his johnboat he hangs his legs over the bow and his booted feet rest into the mud below. In the summer he rigs an umbrella above the chair to protect him from the sun.

Well it works he says to the naysayers.

Grabbing his seven-foot rake he slowly feels his way up the creek as far as the tide will allow. Each time the rakes steel tines make a ting Harrell pulls up his load. At this particular spot every other rake yields two to three clams but soon he stumbles upon a honey hole and occasionally lands five in one.

Unaccustomed to having company on his outings Harrell apologizes for carrying on while he rakes. As someone who relies on clamming he is deeply concerned about the price he can get for his catch and the rise of inland clam farms.

The fisherman is an endangered species he says. There is no comparison between the taste of wild and farm-raised clams. The ones raised in tanks havent been out here in the natural saltwater and dont get the flow of the tide like the wild ones.

Since clam season is open year-round he says the dollar amount of clams is integral to the health of the commercial fishing industry.

The reason why clam prices are so important is because they are the cash cow of commercial fishing Harrell says. I saw one of my shrimping friends out here not long ago clamming and he said he had to go clamming because he needed gas money to go shrimping. Clams are always there.

Even though clams are readily available throughout the year Harrell warns that a full day of clamming is hard work let alone finding them to begin with. At 69 he says his doctors are baffled that he does not take any prescription medication. He attributes his good health to his work environment.

With clamming you wont have wealth but you will have your health he says. It is the way I measure my health; I know Im sick when I cant clam.

In a days work he tries to average 100 clams every hour usually for three or four hours or as long as the tide permits. Clams are priced individually. Harrell says he averages 17 cents per clam at local markets. The easiest clams to sell and Harrells favorites are the littlenecks and middle necks the smallest of the local varieties and prized for their tenderness and flavor. These varieties grace the ice at Motts Channel Seafood where Harrell hauls his loot and where Danny Hieronymus has worked for several years.

The son of Captain Glenn Hieronymus who with his siblings originally opened Hieronymus Brothers Seafood in 1980 Danny Hieronymus grew up clamming and oystering the waters behind his familys Hampstead home. He got this first johnboat when he was eight years old.

Armed with just his mothers garden rake gloves and buckets Hieronymus says his clamming skills quickly changed when a friend informed him that there was such a thing as a clam rake. From there like all other commercial fishermen Hieronymus learned that he could depend on the clam when he needed some quick cash.

Some of my friends were taking a surf trip up to the Outer Banks this one weekend and I needed some gas and food money he recalls. So I skipped school Thursday and Friday and went clamming.

Now that he has spent most of his life in the commercial fishing industry as well as the restaurant industry having trained at Johnson and Wales University College of Culinary Arts Hieronymus knows how important the clam is.

I consider clamming just about the backbone of the fishing industry because you can always fall back on it Hieronymus says. If all the seasons are closed on everything else at least you can still go clamming so it is like a little salvation for commercial fishermen.

Hieronymus is also well aware of the importance of clams in bringing the most out of seafood dishes both for the meat and the juice.

When oyster season comes up the clam does take a back seat which it shouldnt he says. People underestimate the clam its not just for the meat its also for the juice that clam juice is priceless.

From the shell to the meat to the juice Jerry Harrell knows the whole clam is priceless. Standing among the marsh grass the salty air brushing his face he scans the muddy bottom one last time to make sure he hasnt left any area un-foraged. Like the clams he rakes the salt water salty air and tidal ebb and flow of the sound provide everything he needs.

I reckon Im fortunate enough to make a living out here if you can call it that he muses. But at least Im not killing myself in some mill or something.