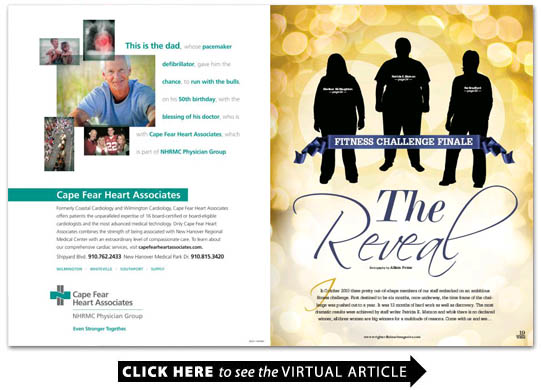 In October 2010 three pretty out-of-shape members of our staff embarked on an ambitious fitness challenge. First destined to be six months once underway the time frame of the challenge was pushed out to a year. It was 12 months of hard work as well as discovery. The most dramatic results were achieved by staff writer Patricia E. Matson and while there is no declared winner all three women are big winners for a multitude of reasons. Come with us and see

Adding a full hour evening training session twice a week to an already tight schedule was a challenge but I figured if LaMaine was willing to train me I would have to make it work.

Homework was next which didnt fare so well so we agreed on a walking schedule around the 2.4 mile Loop every day even on training days.

It wasnt long before I was a mass of complaining muscles LaMaine doesnt do anything halfway and I needed help. In stepped Dr. Robert Fibich who Marimar McNaughton dubbed the body mechanic which describes him to a T. The healing hands of Dr. Fibich made it possible to continue.

For me the story is the following: body by LaMaine walking upright by Dr. Fibich.

My weight didnt fly off but as the months rolled by I settled into a routine. My appearance started to change. First to slim down was my lower body; muscles began to appear after a long hiatus; arms and legs then my face were noticeably thinner. Stuff was more firm. Clothes fit better differently. I dropped a size then two.

I jettisoned from my diet foods that made me weaker. For example pasta cant do it and work out. Or pizza. My body started to crave protein so my diet has evolved into a weird blend. I begin each day with veggies through the Champion juicer. My favorite combo: carrots cauliflower Granny Smith apple ginger red grapes and cilantro when I have it. Next organic chicken on black bread homemade mayonnaise sprouts and avocado. I learned to eat these half sandwiches smaller portions lots of nuts and to eat more often as organic as possible.

All total I shaved off 18 pounds but it was from significant locations.

I am a hundred times stronger and able to do things I didnt dream I would be able to do possibly ever again. Thats been huge. For the first six months of this challenge I believed what I was doing was all about me getting fitter healthier but as time went on I realized it was actually a part of Gods plan for my life so that I would be able to do more for His kingdom.

In the food ministry that I serve one of my weekly chores has been to collect donated foods. That means I load boxes of frozen House of Raiford chicken 40 pounds each into my car and then into refrigeration at one of two church kitchens.

Twice weekly I also pick up and deliver several 20-pound bins of bread from Atlanta Bread. Once or twice a month I fill up the entire back of my car with a couple hundred pounds of bread and sweets from Panera. And then there are two weekly bins of Krispy Kreme donuts. Without the changes in me hefting these pickups and deliveries would be impossible.

About three months into the year-long challenge I started doing what LaMaine had been encouraging me to do. I added a second shorter walk to my day. Now the food I was consuming didnt add weight. When I added a third brief walk the weight started to drop away. So for me three activities: walking training and walking again; or walking the Loop walking to the police complex walking to the corner even vacuuming and mopping suffices for the third activity. One is mandatory but to shed pounds that second and third time out have been essential.

For me there was no hair makeover but Jenny Culbreth at Fringe cut my hair shorter in October. I didnt want to color my hair but my self-esteem did get a jolt when my teeth were whitened by Dr. James Smith at Dental Works; this was something I had always wanted to do and I highly recommend it!

I can honestly say this has been the best 12 months of my life. I cross-country skied early on. I grew through zip lining. Theres less of me on the outside but more now on the inside and I made a few treasured friends in the process. My cup runs over!

My gratitude for those who generously gave of their time and resources for me to accomplish what I have is boundless. What a fabulous gift I have been given. And its not over! Pat Bradford

This fitness challenge has made huge differences for me. Before it began in November 2010 I spent most of my time working reading surfing the Web or watching TV. Now I exercise nearly every day spend more time outdoors am more capable in my everyday life and have had adventures that I wouldnt have tried before.

Brian Bohrer at Urban Fitness launched my training. After a fitness assessment he started me on low intensity cardio strength and core training. Within a few months I more than doubled the number of crunches pushups and other basic exercises I could do and had fun with other exercises. I could also climb the stairs at the historic county courthouse without getting out of breath and carry a case of water without straining.

In March I joined the Cape Fear Contra Dancers. Now Im a member of their board and Im spending this entire New Years weekend at a dance camp at Bogue Banks.

By June I had lost 40 of the 50 pounds I had set as a goal. A couple of months later Brian was accepted into the police academy and I didnt get a new trainer right away. I worked out less frequently on my own and ended up gaining 10 pounds back.

In September Leo Andrades at Lumina Fitness started training me. With his help Ive progressed from isolated movements to whole-body exercises. The round-the-clock access at the gym is also great for fitting solo cardio into my irregular schedule. Since November my neck thigh and calf measurements have all dropped by an inch and I have lost two inches from my waist.

Meanwhile I was lucky enough to win a makeover as part of Lumina Stations Week of Wow! After consulting me Blush Haus of Beaut owner Elisha Wendt cut 14 inches from my hair which had been growing since junior high school and restored some of the natural color that had darkened over the years. Blushs Chelsea Sule also applied my makeup for a fashion show on Nov. 11 and Jess James helped Ziabird owner Lynn Manock select my wardrobe. When I walked down the runway I was thrilled by the cheers and clapping that showed how happy people were for me.

People are still complimenting me on the changes in my looks. However my weight has remained steady and I have to get really serious about dieting instead of just vaguely trying to eat more sensibly. I have recently embarked on a regimen of no grains no refined sugar and no deep-fried foods and I hope that will head the scale in the right direction again. Trish Matson

When I embarked on this fitness challenge now more than a year ago I had gained 50 pounds in the five years that I came to Lumina News as a staff writer in 2006. In the autumn of 2010 I set the ambitious goal of losing those 50 pounds. I had recently resigned my position as Homes Editor of Wrightsville Beach Magazine to concentrate on the demands of my job as managing editor of our weekly newspaper. It was not hard to find an hour and a half at least two or three sometimes four or five times a week to visit The Crest and work through the routine that Nick Kentrolis had devised for me.

What was tricky was relearning how and what to eat to support the fitness regime. I wasnt thrilled about the volume of animal protein on the diet; one it is expensive and two unless it is organic too much animal protein is laced with hormones.

I sought and found a new way to nourish my body with plant protein. By attending food support groups led by Pat Delair of Conscious Integration and Earth Save I learned the importance of alkalizing the body with raw food juiced fruits and vegetables liquid chlorophyll and sprouts. Today I grow and harvest my own wheat grass juicing it with a hand-cranked device specially made for that task. With my Champion juicer I pulverize blends of organic raw carrots celery apple and ginger; sometimes I make smoothies with a base of frozen organic bananas.

Six months into the fitness challenge I accepted a promotion: editorial director of WBM (“Just when I thought I was out they pulled me back in ” Michael Corleone from The Godfather) adding another 10 to 15 hours per week to the 45 I was already logging. The increase in job duties along with a few silly knee and ankle injuries virtually sidelined my trips to The Crest. Sadly I have yet to find those one and a half hour windows of opportunity to return to that routine full time.

I lost my first 12 pounds at The Crest though it took about five months to achieve. Ive lost another 8 pounds since then which I can attribute to new eating habits. In the last two months I have even given up caffeine hard to imagine for this confirmed coffee lover.

I dont think that any of us who engaged in this yearlong challenge have completely arrived at our destinations and so we continue to pursue our goals. Personally Im proud of shedding 20 pounds and grateful for all of the support I have had during the journey. Marimar McNaughton

Wardrobe provided by: Elizabeths Tres Chic at the Cotton Exchange