The Resurgence of Crock-Pot Cookery 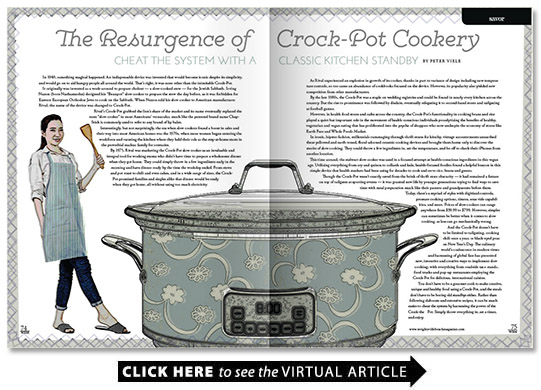 Cheat the System with a Classic Kitchen Standby

In 1940 something magical happened. An indispensable device was invented that would become iconic despite its simplicity and would go on to aid hungry people all around the world. That’s right it was none other than the inimitable Crock-Pot.

It originally was invented as a work-around to prepare cholent — a slow-cooked stew — for the Jewish Sabbath. Irving Naxon (born Nachumsohn) designed his “Beanpot” slow cooker to prepare the stew the day before as it was forbidden for Eastern European Orthodox Jews to cook on the Sabbath. When Naxon sold his slow cooker to American manufacturer Rival the name of the device was changed to Crock-Pot.

Rival’s Crock-Pot grabbed the lion’s share of the market and its name eventually replaced the term “slow cooker” in most Americans’ vernacular much like the patented brand name ChapStick is commonly used to refer to any brand of lip balm.

Interestingly but not surprisingly the era when slow cookers found a boost in sales and their way into most American homes was the 1970s when more women began entering the workforce and vacating the kitchen where they held their role as the stay-at-home mom in the proverbial nuclear family for centuries.

By 1975 Rival was marketing the Crock-Pot slow cooker as an invaluable and integral tool for working moms who didn’t have time to prepare a wholesome dinner when they got home. They could simply throw in a few ingredients early in the morning and have dinner ready by the time the workday ended. From stews and pot roast to chili and even cakes and in a wide range of sizes the Crock-Pot promised families and singles alike that dinner would be ready when they got home all without using too much electricity.

As Rival experienced an explosion in growth of its cooker thanks in part to variance of design including new temperature controls so too came an abundance of cookbooks focused on the device. However its popularity also yielded new competition from other manufacturers.

By the late 1980s the Crock-Pot was a staple on wedding registries and could be found in nearly every kitchen across the country. But the rise to prominence was followed by disdain eventually relegating it to second-hand stores and tailgating at football games.

However in health food stores and cafes across the country the Crock-Pot’s functionality in cooking beans and rice played a quiet but important role in the movement of health-conscious individuals proselytizing the benefits of healthy vegetarian and vegan eating that has proliferated into the psyche of shoppers who now underpin the economy of stores like Earth Fare and Whole Foods Market.

In ironic hipster fashion millennials rummaging through thrift stores for kitschy vintage accouterments unearthed these yellowed and earth-toned floral-adorned ceramic cooking devices and brought them home only to discover the merits of slow cooking. They could throw a few ingredients in set the temperature and be off to check their iPhones from another location.

This time around the stalwart slow cooker was used in a focused attempt at health-conscious ingredients in this vegan age. Utilizing everything from soy and quinoa to collards and kale health-focused foodies found a helpful beacon in this simple device that health markets had been using for decades to cook and serve rice beans and greens.

Though the Crock-Pot wasn’t exactly saved from the brink of thrift store obscurity — it had remained a fixture on top of tailgates at sporting events — it was granted new life by younger generations trying to find ways to save time with meal preparation much like their parents and grandparents before them.

Today there’s a myriad of styles with digitized controls pressure cooking options timers sous vide capabilities and more. Prices of slow cookers can range anywhere from $39.99 to $799. However simpler can sometimes be better when it comes to slow cooking as less can go mechanically wrong.

And the Crock-Pot doesn’t have to be limited to tailgating cooking chili once a year or black-eyed peas on New Year’s Day. The culinary world’s coalescence in modern times and harnessing of global fare has presented new inventive and creative ways to implement slow cooking with everything from roadside taco stands food trucks and pop-up restaurants employing the Crock-Pot for delicious international cuisine.

You don’t have to be a gourmet cook to make creative unique and healthy food using a Crock-Pot and the meals don’t have to be boring old standbys either. Rather than following elaborate and extensive recipes it can be much easier to cheat the system by harnessing the power of the Crock-the Pot. Simply throw everything in set a timer and enjoy.

In saucepan combine 2 cups vegetable stock and 1 cup dry red quinoa. Bring to a boil. Turn down heat and let simmer until most of the liquid is absorbed. Transfer to Crock-Pot including any excess liquid and remaining vegetable stock. Peel and chop sweet potato into 1/4-inch bites. Add to Crock-Pot with all remaining ingredients. Close lid and cook on high for two to three hours or until sweet potato is softened. Serve with your favorite chili toppings.

Add leftover Thanksgiving turkey meat and jarred smoky sauce to Crock-Pot. Cover and cook on low for three hours. Remove turkey and using a strainer rinse the barbecue sauce off. On a cutting board take two forks and shred the meat until desired consistency. In a metal bowl whisk apple cider vinegar brown sugar cayenne red pepper flakes molasses salt and black pepper. Portion turkey onto bottoms of brioche buns and pour desired amount of vinegar barbecue sauce over the turkey. Spread the other side of the bun with leftover cranberry relish for a holiday twist.

1 can hominy (corn works as a substitute)